Residents on Thursday expressed relief and hope that their lives will soon return to normal after a national state of emergency declared over the novel coronavirus pandemic was lifted for 39 of Japan's 47 prefectures.

But people living in areas remaining under the state of emergency voiced concern that what policymakers and experts perceive as a protracted battle against the pneumonia-causing virus will continue to negatively impact their lives and businesses.

"I believe the flow of people will gradually return to normal," said Yuta Arai, 34, who works at a fruit and vegetable shop in Kanazawa, the capital of Ishikawa Prefecture on the Sea of Japan coast.

Ishikawa is among 13 prefectures that have been designated as areas requiring "special caution" regarding the virus outbreak, but it is set to see the order lifted, along with 38 other prefectures.

"I just hope many customers will visit my shop," said Arai, whose store is in Omicho Ichiba in Kanazawa, a famous market that draws local customers and tourists from other parts of Japan as well as abroad. 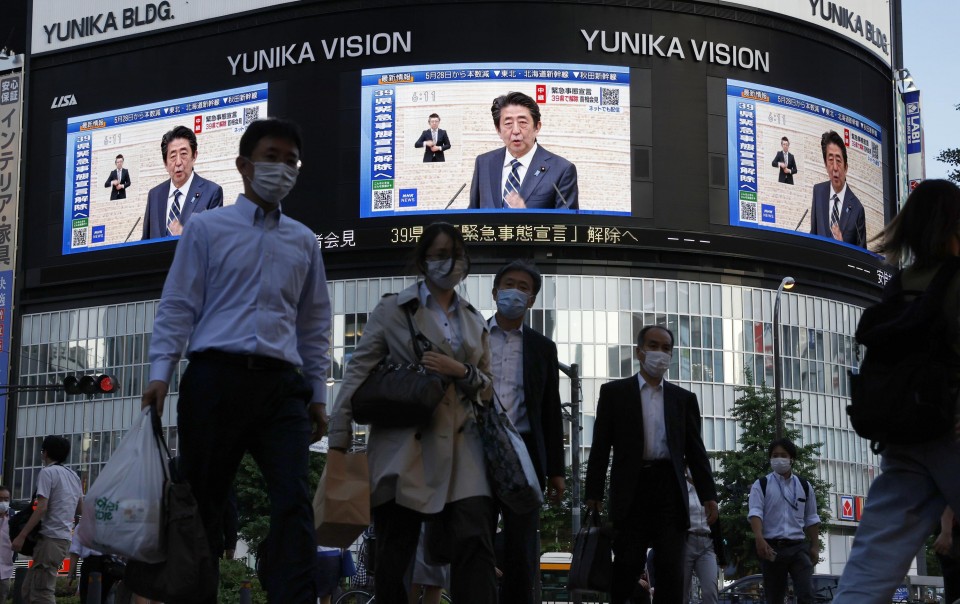 (Large screens in Tokyo's Shinjuku area display on May 14, 2020, Japanese Prime Minister Shinzo Abe announcing the lifting of a coronavirus pandemic state of emergency in 39 of the country's 47 prefectures, excluding Tokyo and Osaka.)

Akane Sakamoto, 25, a company employee, said that like others, she has become tired of complying with Prime Minister Shinzo Abe's request for people to refrain from making nonessential outings during the emergency period.

Sakamoto said she hopes the number of infections will fall to zero in Ishikawa and elsewhere in Japan as soon as possible.

In the city of Akita, northeastern Japan, Aya Osada, 41, who was playing with her 1-year-old son, said, "I am relieved because I have been feeling tension among people around me."

Referring to the fact that no new infections had been confirmed since April 14 in Akita Prefecture, Yumiko Horie, 44, said she did not plan to return to Tokyo for the time being.

"I don't want to travel outside Akita, which is safe," Horie said.

In Okinawa, people involved in the southern island prefecture's tourism industry expressed ambivalent feelings as the partial lifting may lead to the arrival of individuals who are infected with the novel coronavirus, which causes the respiratory disease COVID-19.

Hikaru Sato, a 22-year-old clerk at a steak restaurant, said, "I would be pleased if there are more customers. But I would be scared if the number of infected people increased."

In the meantime, Tokyo will remain under the state of emergency along with seven other prefectures. The Japanese capital has the largest number of infections.

The number of morning commuters at JR Shimbashi Station in central Tokyo on Thursday was far lower than levels before Abe declared the state of emergency last month.

"It is hard for me to remember the scenes here of bustling people," said Ayako Ogawa, 73, who was returning to her home in Tokyo's Setagaya Ward after her part-time cleaning job.

"I wonder if we will ever see vigor here again," Ogawa said.

Takayuki Tanno, who works for a startup company, said, "It can't be helped that Tokyo will not return to normal. But I'm worried the current situation will persist and may have a negative impact on the economy."

A resident of Ota Ward, Tanno, 55, said some of his colleagues working from home have become frustrated because it is difficult to switch from a working mode to a private mode and vice versa.

In Hokkaido, where the number of COVID-19 patients rebounded after briefly dropping in April, Jun Kanda, a 38-year-old web engineer, said, "I hope (the central government) will make a judgement about the lifting after the situation is under control."

In Gunma Prefecture, Masayuki Oe, who runs an antique shop in the prefectural capital Maebashi, expressed caution about the lifting of the state of emergency and a possible second wave of infections.

"Once lifted, people will become increasingly off guard," Oe, 71, said. "We have to come up with how to get along with the virus. Managers must try various measures."