The Bank of Japan decided Monday to take additional easing steps for the second straight month, including abolishing its limit on buying government bonds and further expanding its asset-purchasing program, to cushion the economy from the impact of the novel coronavirus pandemic.

The BOJ said in a statement it scrapped its annual ceiling of 80 trillion yen ($745 billion) on the amount by which it can increase its balance of government bond holdings to provide ample liquidity to stabilize the financial markets and stem a possible surge in yields.

"The BOJ will buy an unlimited amount of government bonds if necessary to stabilize long-term interest rates at around zero percent" under its monetary policy of yield curve control, Bank of Japan Governor Haruhiko Kuroda told reporters following its policy meeting. 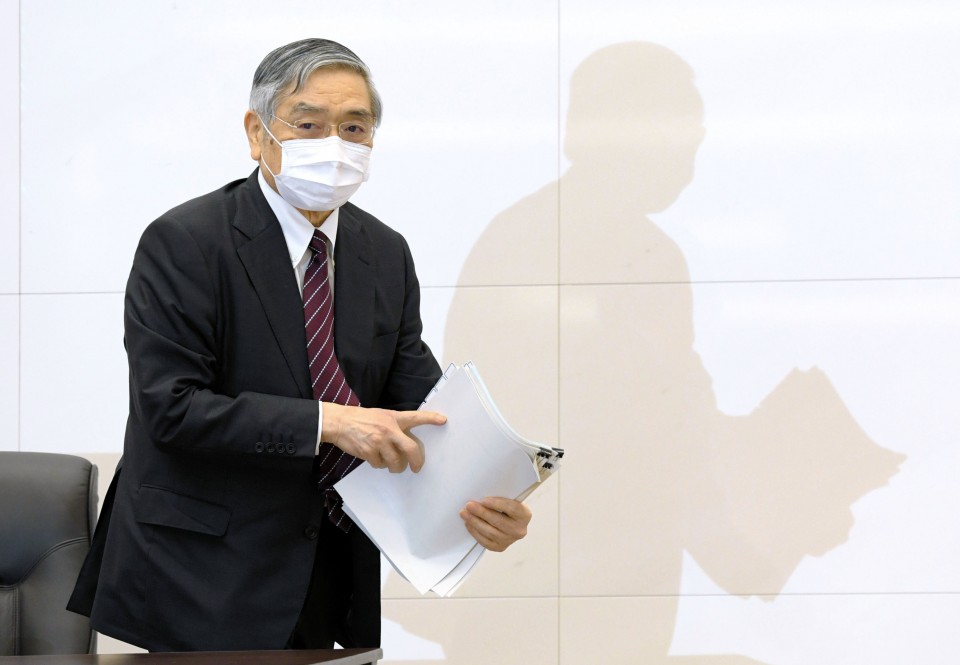 The BOJ has pledged to buy bonds in a flexible manner to conduct yield curve control operations, by which it guides long-term interest rates to around zero percent.

He also said the BOJ will take additional easing measures if necessary to ensure stable financial markets in Japan and achieve its 2 percent inflation target. "We will maintain (the unlimited buying of government bonds) for an extended period," he added.

The move follows a similar decision by the U.S. Federal Reserve last month to expand its buying of government bonds to an unlimited amount and the Japanese government's endorsement of an emergency economic package worth 117.1 trillion yen.

"In this crisis situation, it is important to take actions along with the government, as seen in Europe and the United States. We expect a synergy effect between our monetary measures and the government's fiscal emergency package," said Kuroda.

"The spread of virus infections at home and abroad has had a serious impact on the Japanese economy and is deteriorating it further," he added. "We will do whatever we can."

The removal of the annual purchase target for government bonds is seen as largely symbolic, given that the BOJ has not recently increased its purchase of them by more than 20 trillion yen per year.

But the abolition will give the BOJ more flexibility to buy bonds as necessary to prevent a possible spike in long-term interest rates, as the government plans to issue 23.36 trillion yen of deficit-covering bonds to fund the economic package.

Kuroda said the central bank will buy government bonds only to maintain its yield curve control operations, shrugging off concern over the financing of the government's fiscal deficits.

However, "unlimited buying of bonds by the BOJ could lead to a loosening of the fiscal discipline of the government and a possible surge in bond yields may deteriorate the central bank's balance sheet," said Takashi Miwa, chief economist at Nomura Securities Co.

The central bank additionally raised the limit on corporate asset purchases to help companies secure funds amid the continuing spread of the pneumonia-causing virus.

It lifted its target for corporate bond and commercial paper purchases to about 20 trillion yen in total until the end of September, up from a total of 7.4 trillion yen introduced in March.

It decided last month to introduce further easing measures for the first time in over three and a half years.

"The top priority is to support companies' financing in order to prevent mass bankruptcies and unemployment," said Takeshi Minami, chief economist at the Norinchukin Research Institute.

"The increased target for corporate bond and commercial paper purchases will be beneficial to some extent, helping large companies' financing," he added.

The BOJ also decided to boost loans to financial institutions by expanding the range of eligible collateral to 23 trillion yen as of late March, up from 8 trillion yen decided in last month's meeting.

However, it left its short-term interest rates unchanged at minus 0.1 percent and its annual target for exchange-traded fund purchases at up to 12 trillion yen.

In its quarterly economic and inflation outlook report released following Monday's policy meeting, the BOJ downgraded its growth forecast for fiscal 2020 through March 2021 to between minus 3 percent and minus 5 percent from the 0.9 percent growth initially projected in January.

"Japan's economy is likely to remain in a severe situation for the time being due to the spread of the novel coronavirus at home and abroad," the report said.

The International Monetary Fund said earlier this month that the Japanese economy is projected to shrink 5.2 percent in 2020 from a year earlier, its worst contraction since 2009, while the global economy is expected to contract by 3.0 percent.

The BOJ expects the country's economy to rebound in fiscal 2021 and grow between 2.8 percent and 3.9 percent.

The BOJ released its inflation outlook for the three years through fiscal 2022 and said that prices are not expected to exceed its 2 percent inflation target.

In fiscal 2020, the consumer price index will fall into negative territory at between minus 0.3 percent and minus 0.7 percent, it said.

"The outlook for prices is very unclear and it will take some time for inflation to grow. But I don't think the price trend will be deflationary as our board members say it is likely to pick up in fiscal 2021 and 2022," said Kuroda, adding the central bank will closely monitor developments amid the global spread of virus infections.

The BOJ said Thursday it would shorten its initially planned two-day meeting from Monday to a one-day event as part of efforts to prevent virus infections among its board members.