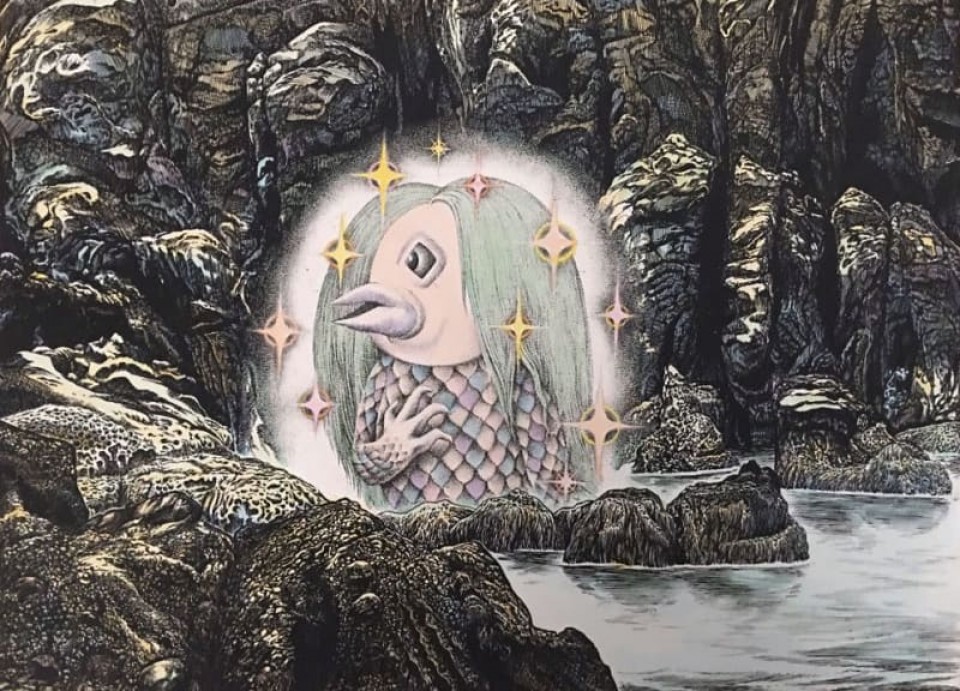 TOKYO - Social media users have been getting creative recently in posting images of a legendary Japanese "yokai" monster said to have emerged from the sea and prophesied an epidemic, uploading them alongside messages wishing for a swift end to the coronavirus outbreak.

The story of the half-human, half-fish "amabie" monster was first featured in a 19th century woodblock-printed news sheet from the Edo Period (1603-1868). The creature was depicted with long hair and a beak and a body covered in scales.

An amabie is said to have appeared in the sea off Higo Province, now Kumamoto Prefecture in southwestern Japan, and told an official, "There will be a bountiful harvest for six years, but disease will also spread. Quickly draw a picture of me and show it to the people" before disappearing back into the waters.

The official had gone to the coast in Higo after seeing something shining in the waters every evening, according to the legend.

On March 6, Kyoto University Library posted on its Twitter account a picture of the original news sheet dated April 1846 with an illustration of an amabie and a description beside it. The piece is in its digital archive.

Since then, social media users have posted amabie images in a myriad of forms, including clay figurines, embroidery, paper cutouts and manga alongside phrases wishing for an early end to the current pandemic.

On March 20, a video of Kumamoto's iconic bear-like mascot "Kumamon" dressed as amabie appeared on the character's official Instagram account.

A drawing of the monster by the late manga artist Shigeru Mizuki (1922-2015), known for his manga about Japanese yokai, was also released on the Mizuki Production Twitter account on March 17.

"I hope we can get away from this disaster soon," his daughter Naoko Haraguchi said.

"Japan has traditionally had a custom to try to drive off epidemics by such means as drawing an 'oni' ogres on pieces of paper and putting them up," said Yuji Yamada, a professor of Mie University who is well versed in Japan's history of faith.

"When many people are suffering and dying, our wish for the end (of the pandemic) is the same in all ages," he said.