Former Argentina captain and World Rugby chairman hopeful Agustin Pichot believes rugby must change as it looks to both build on last year's World Cup in Japan and emerge from the coronavirus pandemic that has halted all sports worldwide.

The 45-year-old, currently vice chairman of the sport's governing body, is running against 68-year-old former England captain Bill Beaumont, who as the incumbent is running for a second term in the election slated for April 26.

It is, as Pichot told Kyodo News this week from Buenos Aires where he is in lockdown with his family, not just a generational battle but also a contest between a representative of a relatively new Tier 1 nation and the establishment. 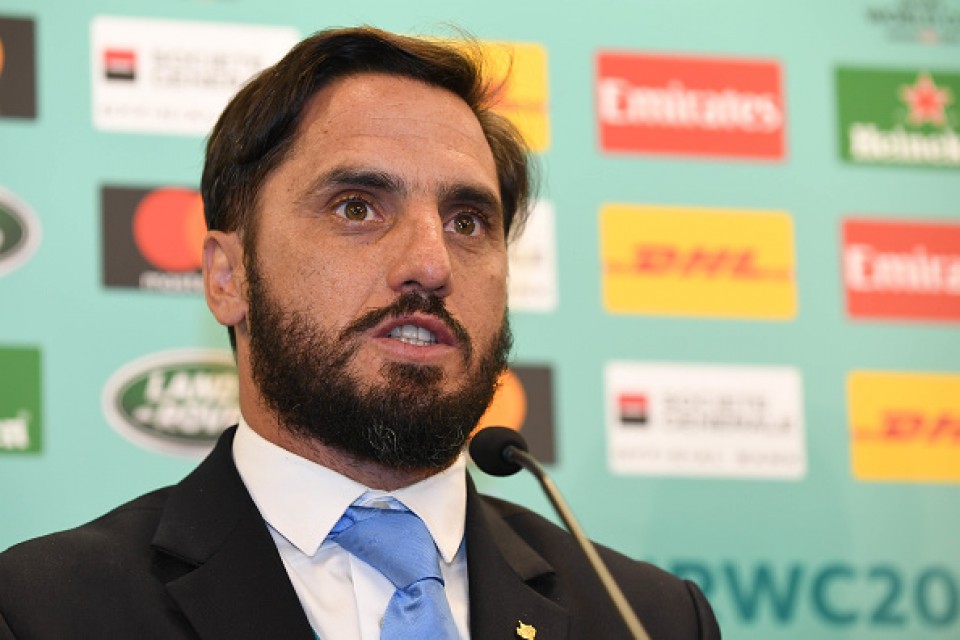 "We need a more modern way of seeing things and addressing problems," he said.

Pichot stresses it is "a philosophical decision" to run and one he had been thinking of for some time, though he had kept from going public with it until earlier this week because he was sensitive about how the virus was spreading and "did not want to be disrespectful."

"I was sure the election would be postponed," he said.

If he gets the nod, he believes "a lot needs to change and be addressed with a different mindset. Things have been done the same way and we need change," adding that Japan is a prime example of where things are going right and wrong.

"Japan put on an amazing World Cup but they are still not part of an established competition," he said, referring to the fact that the Brave Blossoms have no place in either the Rugby Championship in the Southern Hemisphere or the Six Nations in the North.

"Japan needs to be in the discussion as they merited, just as Argentina did in 2007, to be part of a big championship. Emerging nations (currently) do not have a pathway to the big stage."

Much of that discussion, Pichot believes, should be about how the sport can be truly global -- not just in terms of a season that takes into account player welfare either side of the equator, but in how the sport is run.

"There is a lot of mistrust from both the North and South to World Rugby and it's a power battle that sometimes harms the game. You need global leadership to make things happen."

"There needs to be regular conversation with stakeholders and for things not to be so bureaucratic. And you can't control things from (Dublin, where World Rugby is based). You need to rely on stakeholders all around the world."

During the World Cup, Pichot was amazed at the passion of the Japanese fans, many of whom were watching rugby for the first time.

However, he was also made aware that many who were brought up watching baseball, which is a "relatively simple sport that you can follow in five minutes," were struggling to understand the on-field complexities.

"One of the points of my manifesto is to make rugby a simpler, more dynamic, and entertaining game," he said. "First of all it has to be safe and then it has to be simpler."

In a sign of the generational gap at the top, Pichot said rugby needs to sanction a realistic, marketable video game to help children and new fans get a basic understanding of the game and he hopes tech-savvy Japan can perhaps provide an avenue to that.

Japan also came up when he talked about player eligibility, a subject close to his heart.

Pichot has long said that certain countries rely too much on foreign-born players. He was, however, at pains to point out that the Japan case is unique because all but six of the Brave Blossoms squad at the World Cup were educated at Japanese high schools or universities.

"I have never complained about cases like (Japan captain Michael) Leitch who went to a country to get educated. They are not taking advantage of the system. I was more focused on project players," he said, referring to adult players signed from overseas with the sole purpose of qualifying for another country on residency rules.

Pichot said the passion exhibited by the players and fans at the Rugby World Cup in Japan had reminded him why he loved the sport so much. None more so than in Kamaishi where he watched Uruguay upset Fiji.

And he had a message for the people of the northeastern Japan city that was so devastated by the 2011 earthquake and tsunami.

"I would love to see the Canada versus Namibia game played there at some stage in the future," he said, referring to one of the three RWC games that were canceled as a result of Typhoon Hagibis which swept through the country mid-tournament, bringing devastation and creating travel chaos.

The result of the election to determine the new chairman and executive committee will be announced at a virtual meeting on May 12.