BOJ lowers assessments of all 9 regional economies over coronavirus

The Bank of Japan downgraded on Thursday its assessments of all of the country's nine regional economies for the first time in over 11 years, as the coronavirus outbreak is having a significant impact on a wide range of business sectors.

The central bank said the regional economies "had been weak or facing strong downward pressure" from the spread of COVID-19 in its quarterly "Sakura Report," lowering its view on all the regions for the first time since January 2009 following the 2008 financial crisis.

In a teleconference with the bank's regional branch managers earlier Thursday, Governor Haruhiko Kuroda said the coronavirus outbreak is having a "serious impact" on the Japanese economy, and that the global economic outlook remains very unclear.

"The BOJ will take additional easing measures without hesitation if necessary," he said, adding that the bank will continue to closely monitor the economic impact of the virus. The central bank will hold a two-day policy meeting from April 27, having decided in the previous meeting in mid-March to take additional easing steps including expanded asset purchases and corporate loan programs.

The virtual meeting took place against a background of rising infections in major urban areas. Prime Minister Shinzo Abe on Tuesday declared a state of emergency for Tokyo, Osaka and five other prefectures in an attempt to curb the reach of the virus. 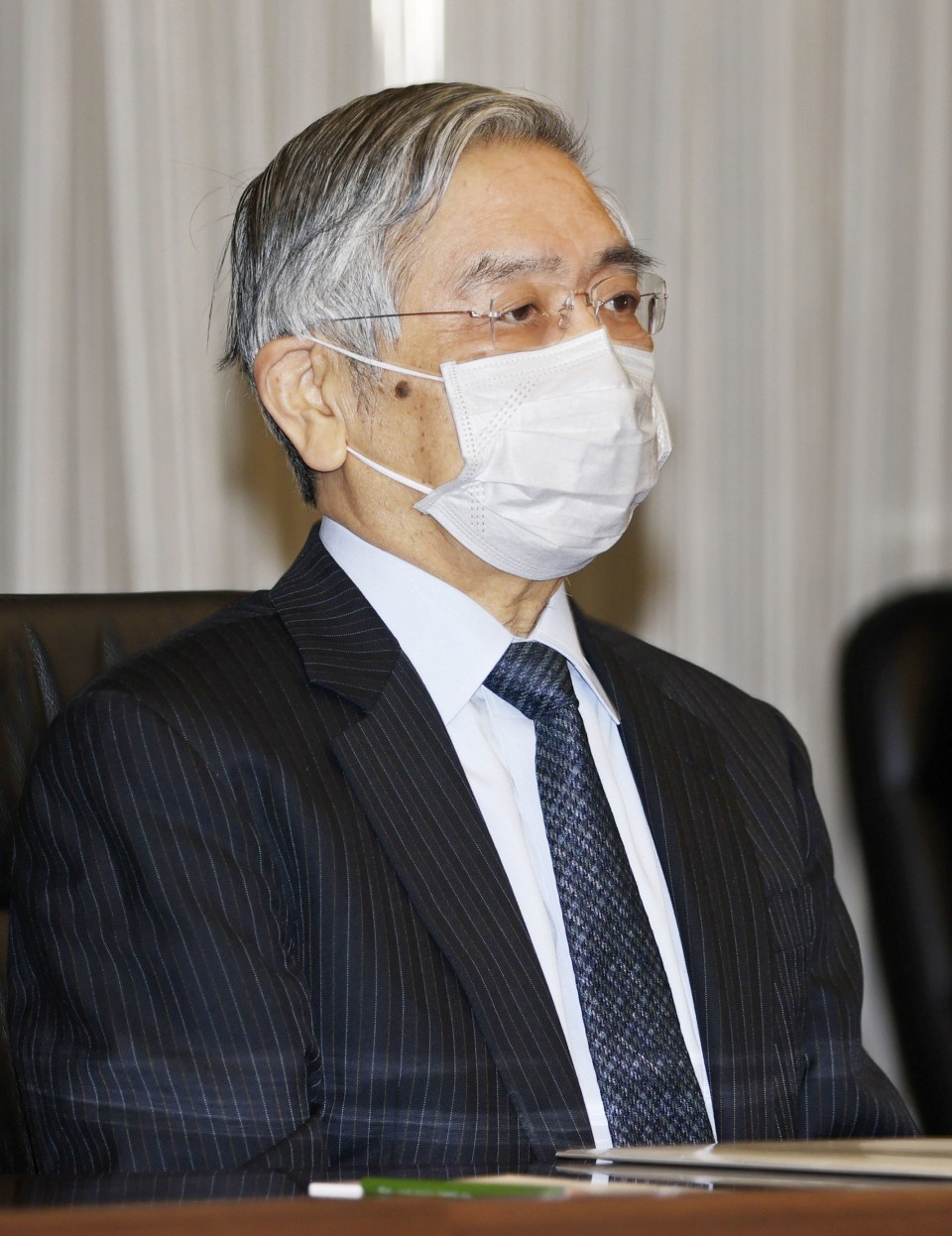 Kuroda said coronavirus has weighed on the country's economy as exports, output and spending declined, as did the number of inbound tourists to Japan.

"The uncertainty over the economic outlook is very high as it remains unclear when the global coronavirus infection will end," he added.

In the BOJ's latest report, many companies in both the manufacturing and nonmanufacturing sectors expressed their concerns over falling global demand and weak domestic spending due to the worldwide spread of the pneumonia-causing virus.

"The business outlook is very unclear due to concerns over falling demand for automobiles even if supply chains (in China) return to normal," a machinery maker in Kyushu-Okinawa region was quoted as saying in the report.

"The impact of the coronavirus outbreak on the regional economy is larger than that of the Lehman shock," a company in Kyoto's tourism industry said. "The number of both overseas and domestic tourists fell sharply," it added.

Some sectors such as food production and supermarkets reported increased sales.

"Customers continued to hoard frozen foods as they refrained from going out. Our sales rose in February and March," a supermarket operator in western Japan said.

Some firms voiced concerns over the postponed Tokyo Olympics and Paralympics. A retailer in eastern Japan said that sales of large-sized TVs had not grown as expected and overall earnings could fall short of their target.

The BOJ decided last month to expand its asset purchase program in a bid to stabilize financial markets by increasing the buying of exchange-traded funds at an annual pace of 12 trillion yen ($110 billion) from 6 trillion yen.

"Our country's financial system has been maintaining stability as a whole, but corporate financing has been getting worse," Kuroda said during Thursday's teleconference, adding that global financial markets have continued to show signs of "nervousness" despite aggressive actions taken by major central banks.

"The BOJ is committed to securing liquidity for corporate financing and stability in financial markets by introducing new kinds of market operations, and by increased purchases of commercial paper and corporate bonds," Kuroda said at the meeting.

The key index, measuring confidence among companies such as automobile and electronics makers, fell to minus 8 from zero in December, the lowest level since March 2013. The index for large nonmanufacturers, including the service sector, dived to 8 from 20.

The Sakura report -- named after its cherry blossom-colored cover -- is the Japanese equivalent of the U.S. Federal Reserve's Beige Book and is released every three months following a meeting of the BOJ's regional branch managers.