A ruling party candidate won a seat in a lower house by-election in central Japan held under a state of emergency over the coronavirus, providing relief to Prime Minister Shinzo Abe whose response to the pandemic has been criticized.

Yoichi Fukazawa of the Liberal Democratic Party who was also backed by its junior coalition partner Komeito, defeated Ken Tanaka, who was endorsed by four major opposition parties in the first national poll since the coronavirus outbreak began. Voter turnout was a record low at 34.10 percent. 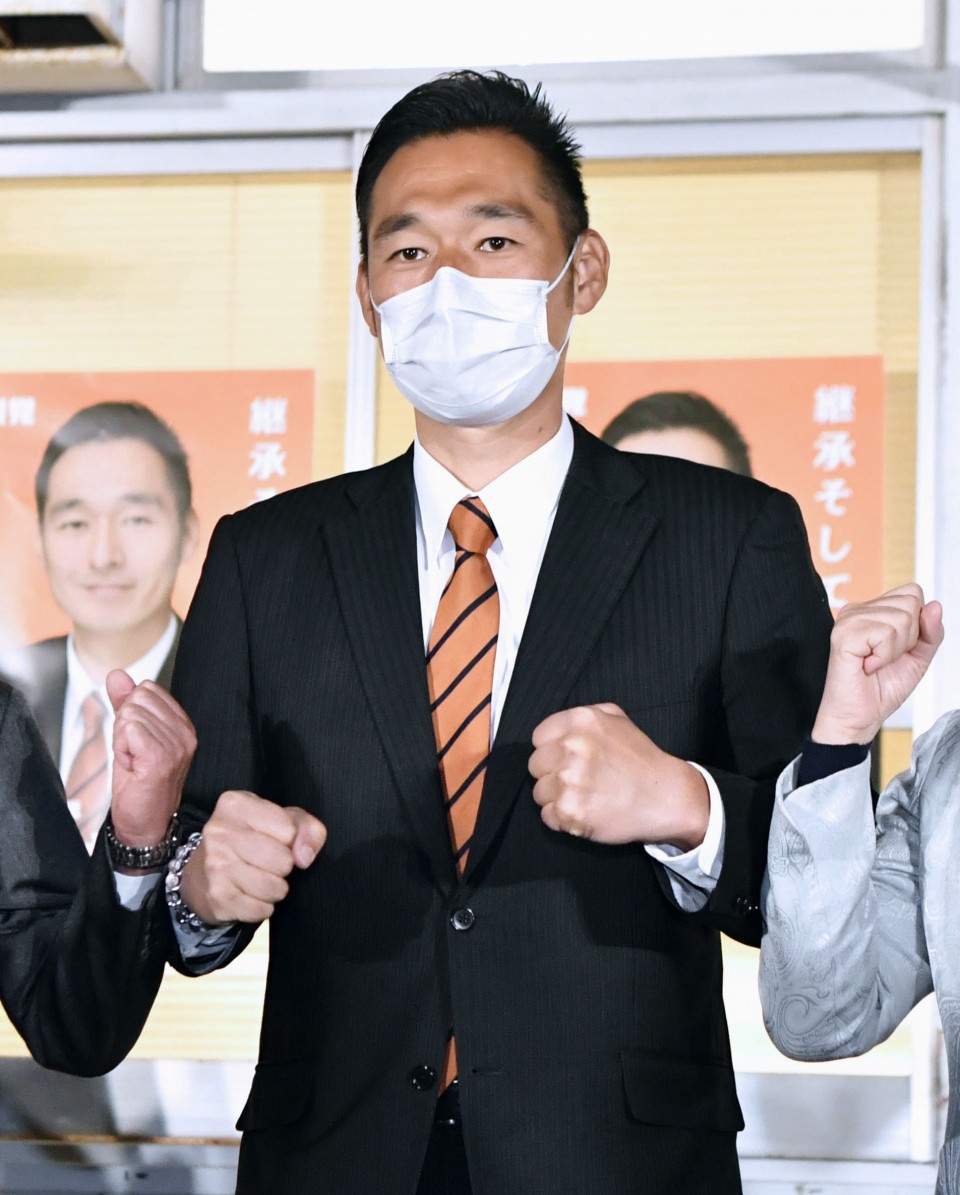 (Yoichi Fukazawa of the Liberal Democratic Party celebrates after securing a seat in a House of Representatives by-election in Shizuoka, central Japan, on April 26, 2020.)

The election in the Shizuoka Nov. 4 district was an opportunity for the ruling coalition to justify their crisis response that opposition lawmakers see as too late and out of touch with the public. It was also marked by firsts for both candidates and voters as Japan scrambles to contain COVID-19.

There were no "banzai," or raising hands high to celebrate an achievement, or giving of a flower bouquet, as Fukazawa's camp broke with customs as measures against the coronavirus spread.

"Under the leadership of Prime Minister Abe, the government has been rolling out a series of steps but I'm aware of the criticism they are not enough," the 43-year-old Fukazawa told reporters. "We will carry out necessary measures."

Abe's support ratings have fallen in recent media polls. His plan to distribute cloth masks to all households has hit a snag amid complaints of defects by recipients and the recent posting of a video clip meant to deliver his "stay at home" message has been perceived as backfiring.

In the run-up to Sunday's poll, Abe yielded to pressure from Komeito after his cash handout plan met criticism and made an abrupt policy change in mid-April to provide 100,000 yen ($930) per person to support all people affected by his emergency declaration that was expanded nationwide in mid-April.

A senior LDP lawmaker said voters gave the party a vote of confidence, but another member elected from Shizuoka said, "I didn't feel we were winning even at the end (of campaigning)."

As the entire nation is under the state of emergency until May 6, the candidates refrained from holding large-scale gatherings for supporters and ditched handshakes to reduce transmission risks. 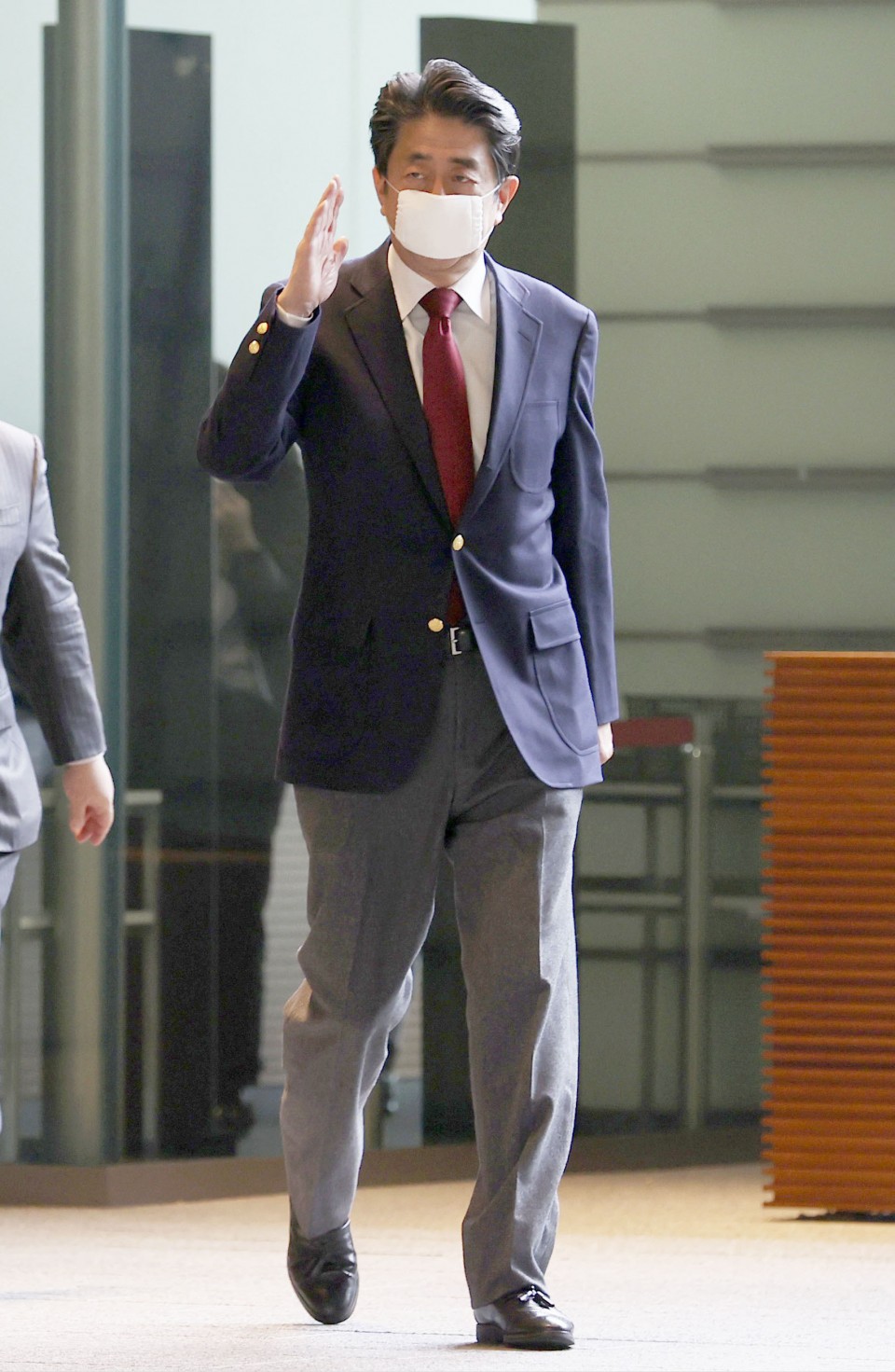 The election was held to fill a seat vacated by former Environment Minister Yoshio Mochizuki who died in December at the age of 72.

People have been asked to stay at home unless there is an urgent reason not to do so. Abe has taken a negative stance toward postponing elections, saying they are at the heart of democracy and voting is deemed as important and urgent.

Election staff disinfected each pencil after a voter cast a ballot at polling stations and left windows and doors open to ensure proper ventilation and minimize infection risks. Voters were asked to disinfect hands and put on gloves before voting.

During 12 days of campaigning, the candidates turned to social media and YouTube so voters could virtually experience stump speeches and understand policy priorities. Senior party executives sought to reach out to voters in Shizuoka from Tokyo under the nationwide state of emergency.

Some campaign staff acknowledged that online campaigning had its limits given the number of elderly and some other voters not necessarily used to social media.

The opposition camp apparently failed to make full use of the opportunity to strengthen their multiparty cooperation as a counter to the ruling coalition ahead of the next election for the House of Representatives that needs to be held by October 2021.

"I received support irrespective of party lines but I wasn't able to live up it," Tanaka said.

He used his campaign to step up criticism of the government's emergency measures against the coronavirus and vowed to extend more support to struggling small and midsize firms.

According to Kyodo News exit polls, 49.3 percent of 1,056 respondents said they backed the government's handling of the coronavirus crisis, while 43.2 percent said the opposite. Most of those who supported the government response, or 73.3 percent, voted for the LDP's Fukazawa, while Tanaka, the opposition candidate, garnered support from 55.3 percent of those critical of the handling.

Two other candidates were independent Kenzo Yamaguchi, 72, and Ken Tanaka, 54, of NHK Kara Kokumin Wo Mamoru To (The Party to Protect the People from NHK) established by a former employee of NHK, formally called Japan Broadcasting Corp.

As there were two Tanakas with the same first name, the local election board decided to ask voters to write the age of the candidate they voted for on ballot papers. The two Tanakas also use the same Chinese characters.