The Uber Eats food delivery service in March saw a 20 percent increase in the number of restaurant contracts in Japan from a month earlier, its operator said Tuesday, as the government urges people to stay at home to contain the coronavirus spread.

As of the end of March, restaurants using Uber Eats topped 20,000 compared with some 17,000 a month earlier, the Japanese arm of U.S. ride-hailing company Uber Technologies Inc. said.

In contrast, it took five months for deliveries to rise 20 percent to the end-of-February figure of 17,000.

Demae-can Co., one of Japan's major food delivery operators, said it saw orders in March rise some 300,000 from the previous month to 3.03 million.

Nearly 20 prefectural governments, including authorities in Tokyo and Osaka, have asked the operators of various businesses such as restaurants and pubs to shut down or close earlier than usual following Prime Minister Shinzo Abe's April 7 declaration of a state of emergency to prevent the further spread of the virus. 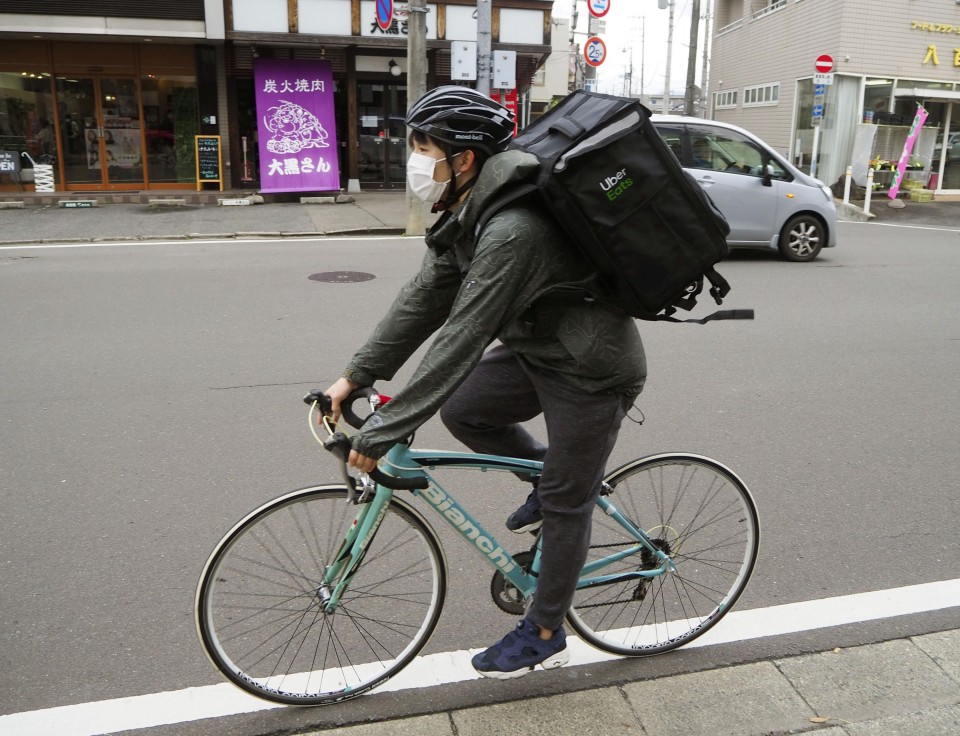 The declaration initially covered Tokyo and six other prefectures and was extended Thursday to all 47 prefectures in Japan.

Authorities have made no particular request for delivery services.

An economist said, however, that delivery sales will make only a limited contribution to propping up the overall eatery business.

"Delivery services will only cover a small amount of the losses" they are suffering during the pandemic, said Yoshimasa Maruyama, chief market economist at SMBC Nikko Securities Inc.

According to his estimates, household spending on eating out will decrease by 75 to 80 percent through the May 6 planned end of the emergency in the seven prefectures where the state of emergency was first in place.

"There is no difference in the severe situation" for restaurants and bars, Maruyama said.

Takeshi Watabe, a 40-year-old manager operating four restaurants in Tokyo, is using Uber Eats. The number of customers halved after April began, although his restaurants were full on most days before the virus outbreak, he said.

Deliveries have not covered the deficit and he has taken out a bank loan. But with no prospect yet for an end to the virus spread, he is "in two minds" about whether to borrow more money.

As of Monday, domestic infection cases reached 11,139, excluding those from the Diamond Princess cruise ship that was quarantined near Tokyo in February.