Japan advises against travel to some 50 nations including U.S., China

Japan on Tuesday raised its travel advisory for some 50 countries including the United States, China and South Korea to level 3, warning against any trips to these areas as the novel coronavirus continues to spread globally.

That is one step down from the Foreign Ministry's highest level, which urges Japanese nationals to "evacuate immediately" from a country or area and "avoid all travel regardless of purpose." 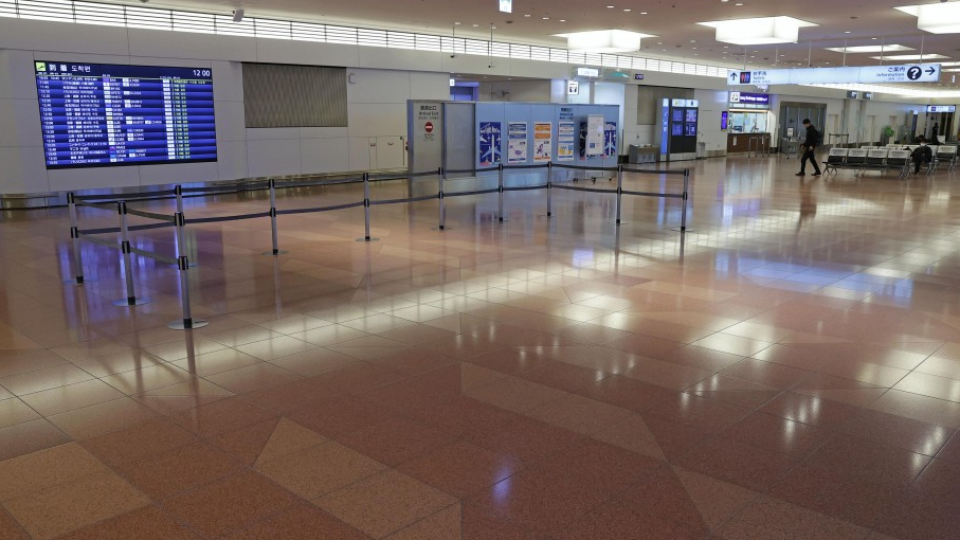 (Few people are seen in the international arrival lobby of Tokyo's Haneda airport on March 30, 2020.)

Prime Minister Shinzo Abe's government is expected to impose an entry ban on foreign travelers who have recently been to the listed countries, which now cover more than a third of the world including most of Europe and Southeast Asia.

Japan is rushing to stem a rise in infections brought in by returnees and foreign visitors, with imported cases making up about one in four of the total in recent days.

But some who have undergone virus testing at airports after arriving have raised doubts on the country's quarantine process.

A 35-year-old man, who was instructed by his company to return to Japan from a posting in Germany, said he had to wait over three hours at the quarantine station at Narita airport to undergo the virus test, which took less than a minute.

Those waiting to be tested were in an enclosed space in close contact with each other -- an environment ripe for the spread of infection.

The returnee was also made to spend a night in a conference room on the airport grounds while waiting for his test results, before being taken to a nearby hotel.

Tokyo on Tuesday reported a record daily increase of 78 new infections, raising its total to 521. Of that number, 10 cases are from what authorities believe is a cluster infection at Eiju General Hospital in Taito Ward. Tokyo reported seven deaths among infected residents Tuesday.

At the hospital, a total of 106 have been found to be infected so far and seven of them have died.

Tokyo Gov. Yuriko Koike met with Abe on Tuesday and reported the current situation of infections and the number of available hospital beds in Tokyo.

The number of cases, excluding about 700 from the virus-hit Diamond Princess cruise ship, topped 2,000 in the country as of Tuesday afternoon as local governors and medical experts have increasingly called for a state of emergency be declared to reduce the spread of infections and avoid overcrowding of hospitals.

On Tuesday alone, local governments together reported slightly over 200 new infections, the largest single-day increase in the country so far.

In addition to the risk of infection, Foreign Minister Toshimitsu Motegi cited border closures and stay-in-place orders enacted abroad as reasons for raising the travel advisory.

"Global infections have been increasing at a faster pace...and we are deeply concerned for the safety of our citizens," he told a press conference.

Among the countries that were raised to level 3 on Tuesday, 21 are in Europe, nine in the Middle East and Africa, seven in Southeast Asia and six in South America.

More than 780,000 have tested positive for the coronavirus worldwide, with the death toll topping 37,000, according to data compiled by Johns Hopkins University.

The global coronavirus outbreak that began in China's Wuhan late last year has already led to travel restrictions and lockdowns in some of the hardest-hit countries such as Italy and France.

Despite a gradual rise in overall infections, Japanese government officials say the country is facing a critical moment to prevent an explosive increase that would prompt Abe to make an emergency declaration.

With the start of the new academic year in early April approaching, education minister Koichi Hagiuda said the government currently does not plan to make another request to uniformly shut schools in Japan.

"We hope local authorities will take a flexible approach" to the reopening of schools, Hagiuda told a press conference after a Cabinet meeting on Tuesday.

The government made an abrupt request in late February that all schools across the country be closed before spring break started to lower transmission risks.

Although Abe had decided to allow schools to reopen in the new academic year, he said Saturday he would first listen to expert opinions, hinting at the possibility that the decision may change.

Abe and other Cabinet ministers began wearing masks and sitting further apart in government meetings Tuesday to prevent infection among them.