Share houses in Tokyo come in all shapes and sizes, but a nonprofit organization for rescue dogs has delved into a fresh approach -- having abandoned canines as housemates.

"Wans Heim," which draws its name from a colloquial Japanese word for "dog" and the German word for "home," occupies the first floor of a two-story house in the quiet city of Higashiyamato, western Tokyo. On the second floor sits the dog shelter for Wanspace, an organization headed by its founder Mie Suzuki, who also birthed the idea for the share house.

"It was ideal for my dog, and I could also share my life with others," said Atsuko Takada, a woman in her 50s who moved into Wans Heim as soon as it opened in May 2018. 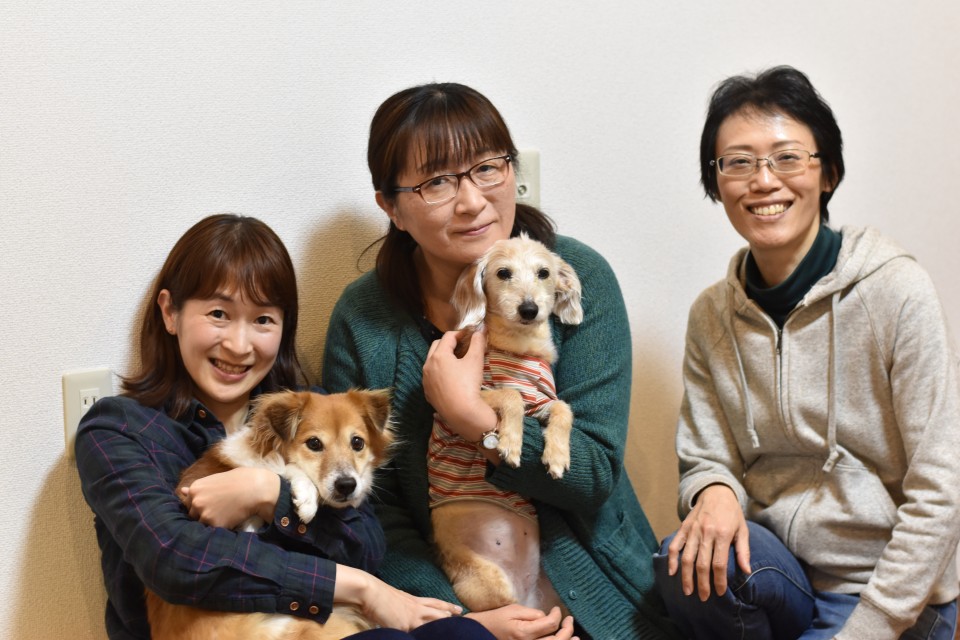 (Wanspace founder and president Mie Suzuki, right, pictured on Feb. 16, 2020, with Miho Hayashi, left, and Atsuko Takada, the two tenants of her share house in Higashiyamato, as they hold Sana and Tea, respectively.)

Her caramel-colored dachshund mix roams the cozy living room as Takada sits at a table accompanied by Suzuki and Miho Hayashi, the other tenant of the two-person residence.

Takada, who works full-time in a daycare center for the elderly in Mitaka, western Tokyo, said the set up was perfect for her needs as it was spacious and would allow someone to watch her 12-year-old dog, Tea, while she was at work.

"I was a bit concerned at first because Tea-chan has always been alone. But through living here, I've been able to learn more about dogs and their personalities," said Takada.

While potential tenants can bring their pets if they pay an additional monthly fee, the primary purpose of the living arrangement is to provide a dog-filled home for people who, for some reason, are unable to own a dog. At the same time, it also serves as an outlet for shelter dogs, currently undergoing rehabilitation, to interact with people.

The approximately 14-square-meter room Takada rents costs 55,000 yen ($510) per month inclusive of utilities, plus an additional 3,000 yen per month for Tea's boarding.

There are usually at least one or two dogs living on the first floor with the occupants, who get involved in dog duties as part of the agreement to live at Wans Heim. This includes taking turns to feed and walk the dogs, and also temporarily looking after dogs from the shelter upstairs when it gets too full.

Hayashi, who occupies the other room, is a nurse in her 40s from nearby Kodaira who moved in shortly after Takada in the summer of 2018. She had volunteered with Wanspace since 2014, first learning of the organization after seeing a poster at Higashiyamatoshi station, which is located within walking distance of the shelter.

"The dog on the poster reminded me of my dog that passed away," Hayashi said. 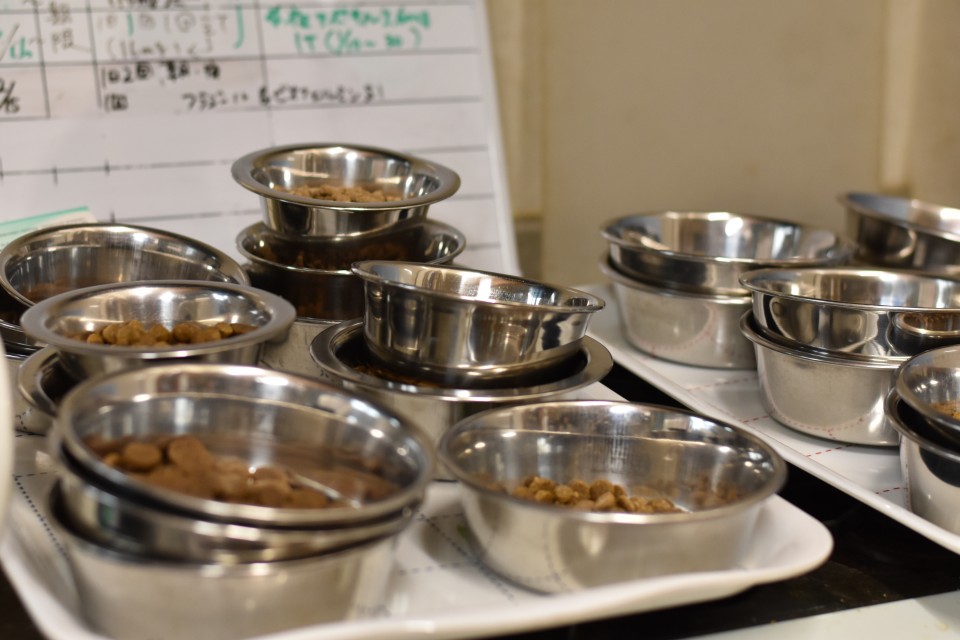 (Bowls of dry food are prepared multiple times a day for the dogs at Wanspace.)

Now living in Wans Heim, she helps to look after Tea and Sana, a timid shelter dog currently undergoing rehabilitation. Both pay 3,500 yen per month on top of their rent to support the activities of Wanspace, and the pair also takes turns cooking, often sharing their meals with Suzuki.

"More than feeding the dogs, I'm actually most grateful that they feed me," Suzuki said with a laugh.

Suzuki, who felt moved to devote herself to animal welfare after raising a shelter dog of her own, said her life experiences became a driving force for exploring new ways humans and dogs can coexist.

She currently resides on the second floor of the house with the shelter dogs but is usually so exhausted from caring for the dogs that she has little energy or time left to cook for herself.

"I personally had a lot of family problems and worries, and even developed a distrust of people, but I changed a lot after meeting (a shelter dog). He became the catalyst for starting Wanspace," she said of her terrier mix Chip, who passed away last year at 17. 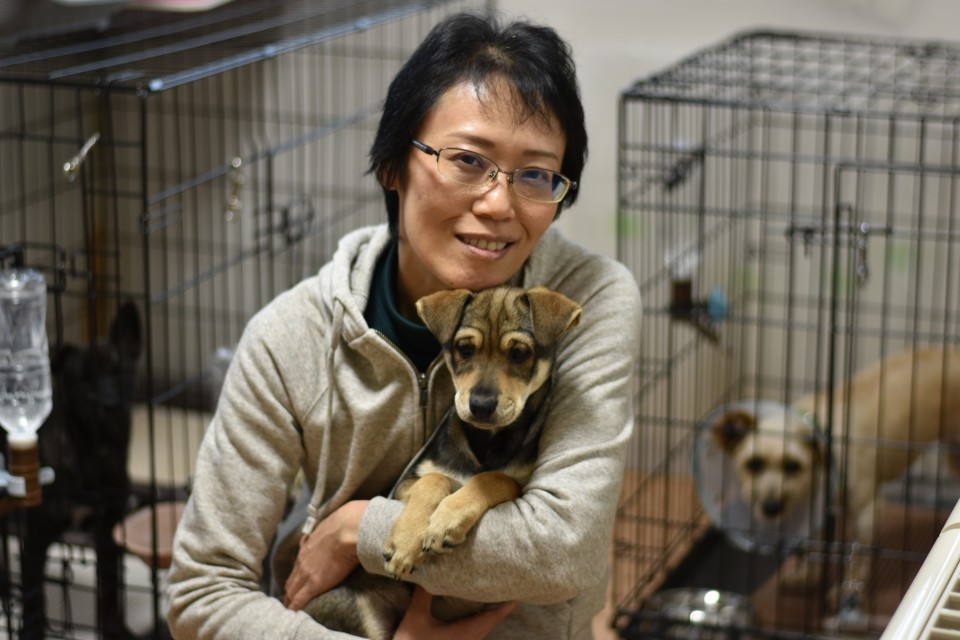 (Suzuki hugs Megane, a puppy who got his name from the folds of skin around his eyes, on Feb. 16, 2020. Megane means "glasses" in Japanese.)

According to Suzuki, the shelter she had adopted Chip from had only allowed it because she was still living with her father at the time. Many organizations in Japan back then were hesitant to allow single people or the elderly to adopt dogs due to fears that they would have trouble raising the animal.

Suzuki, who subsequently moved out and lived alone with Chip, said she established Wanspace in the hopes of creating a system that would provide more opportunities for those sincere about raising a shelter dog.

"I lived by myself and always want to be with shelter dogs even when I grow old in the future. My wish would never come true at this rate, and I started to worry and despair. I never once thought about purchasing a dog from a breeder or pet shop," she said.

Wanspace pays a set amount every month for the dogs' medical fees and for them to be flown over from Okinawa. It also handles the home search and adoption process in the Kanto region and provides training and treatment when necessary. 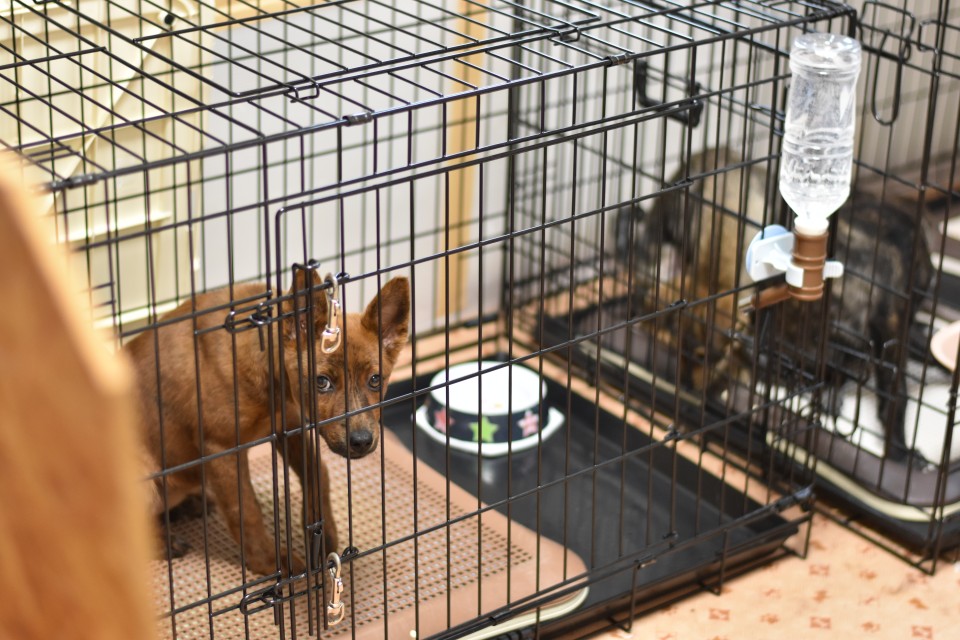 (A recently-arrived puppy from Okinawa looks on curiously as she is quarantined in a room with other new arrivals on Feb. 16, 2020.)

In addition to her experience with Chip, Suzuki felt compelled to devote herself to animal welfare after watching a documentary, more than 10 years ago, on the hundreds of thousands of dogs and cats being abandoned in Japan, and how they were euthanized in gas chambers.

"I was stunned at how behind Japan was in animal welfare and the seriousness of the issue. After seeing that (program), I felt I had to do something," Suzuki said.

Japanese law stipulates that stray dogs and cats that have not been reclaimed or rehomed within a certain timeframe must be put down. While local governments use a range of methods, including intravenous injection of an anesthetic agent, most euthanize using gas chambers due to the more economical cost.

Statistics from the Ministry of Environment show that 7,687 dogs were officially culled in Japan in fiscal 2018. But the number has been consistently dropping, in part due to greater awareness driven by animal welfare groups.

The data also shows that the number of dogs at public centers across Japan being reclaimed or rehomed has risen from around 30 percent in 2008 to almost 80 percent in 2018.

"As we get many young dogs flown over, the rehoming rate at Wanspace is around 90 percent. No dogs have died at our shelter in the last 10 years, and that includes due to accidents or sickness," Suzuki said. 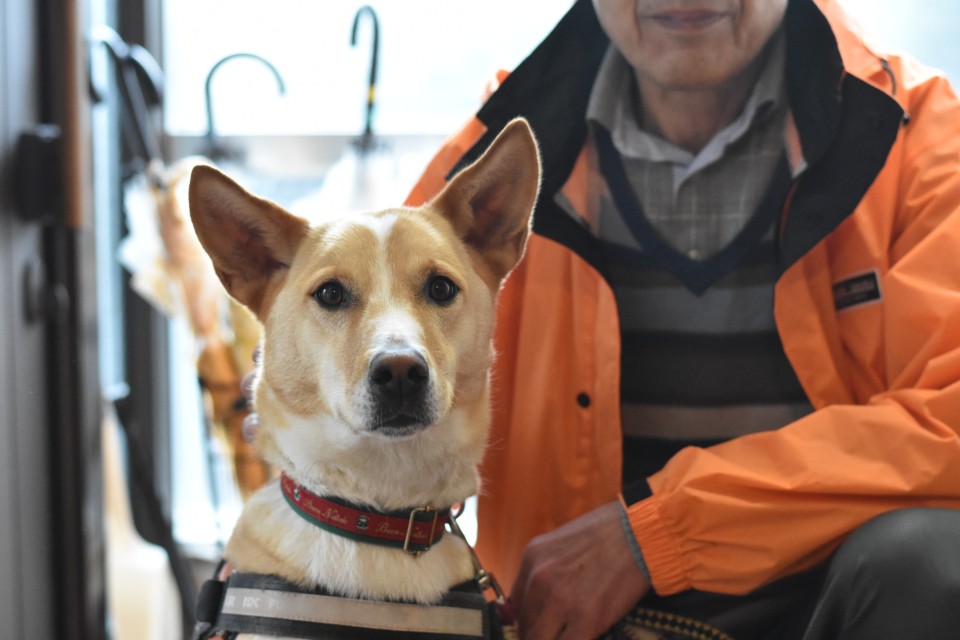 (A volunteer prepares to walk one of the larger shelter dogs at Wanspace on Feb. 16, 2020.)

Wanspace is run by four staff in addition to Suzuki and around 200 to 300 registered volunteers, of whom 15 to 20 are active. They regularly come to help with dog walking and cleaning, or temporarily foster some dogs as a maximum of only around 15 can be kept at the shelter.

Suzuki's ultimate dream is to operate a shelter-annexed condominium in which each tenant of a self-contained apartment can raise a shelter dog, or look after shelter dogs together with other residents if they are unable to raise one independently.

"There are people who wish to own dogs but can't because they are busy with work, or have a lot of business trips, or are concerned about their health or old age. I hope to create a facility that will allow those kinds of people to come to the shelter and look after the dogs with others. That is ideal," she said.