Regional Japan is no stranger at dressing up its historical icons to be paraded as tools for economic revitalization but for residents of Aizuwakamatsu City in Fukushima Prefecture, such icons and their legacy remain a source of pride and identity.

During the Meiji Restoration, when Japan transitioned from shogunate to practical imperial rule, Aizuwakamatsu City, center of the then Aizu Domain, was one of the country's last samurai strongholds where Aizu clan samurai remained loyal to the shogun until their defeat at the hands of imperial forces during the Boshin War in November 1868.

In defeat, senior clan members were exiled to the Shimokita Peninsula in Aomori Prefecture and the new Meiji government ordered Aizuwakamatsu’s Tsuruga Castle to be razed to the ground.

The move preceded a period of marginalization for the people of Aizu from positions of authority by a government dominated by members of the victorious Satcho Alliance, (a situation that some feel is still evidenced in the politics of Japan today).

Marginalized, maybe, but these events have done little to erase the legacy of Aizu's samurai which remains a source of pride for the people of Aizuwakamatsu today, as well as a generator of local industry and economy, as it was before their defeat.

The city of around 120,000 is dotted with facilities established by the Aizu clan samurai, who assumed rule over the domain in the mid-17th century, many of which have been relocated and restored after destruction during the Boshin War.

In the city's north Aizu Hanko Nisshin-kan is a reconstruction of the school where samurai would send their children to be educated.  Established in 1803 and said to have been one of the best of over 300 Edo-era clan schools in Japan at that time (and the first school in Japan to serve kyushoku, school lunches) Nisshin-kan organized classes according to neighborhood groups in order that younger students could learn respect for their elders and good manners, with teachings often reflecting the influence of Confucianism in Japan at that time. 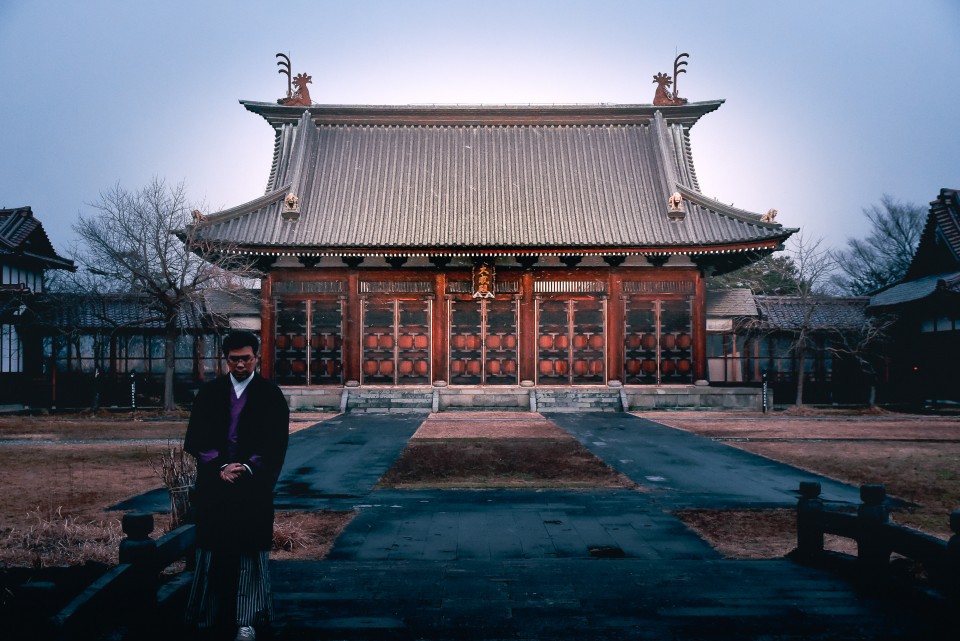 The young samurai have long since graduated but like many of the city's clan treasures, local people bring them to life and class at Nisshin-kan is still in session today -- visitors here can try their hand at kyudo (the Japanese martial art of archery) and zazen, a Buddhist meditative discipline practiced by many samurai.

Hoshina Masayuki became the first lord of Aizu in 1643 after being handed rule by his half-brother and third shogun Tokugawa Iemitsu.  In establishing the family precepts Masayuki cemented samurai loyalty to the Tokugawa shogunate.

Stark reminders of this loyalty can be seen around the city.  In Aizu Bukeyashiki, a beautiful reconstruction of the home of a former samurai in the eastern suburbs of the city, an antechamber marks the haunting scene of jijin -- suicide by the sword -- commited by women and children of the samurai’s family during the Boshin War in order that they might not become a burden as the war dragged on.

On Iimoroyama, a hill east of downtown Aizuwakamatsu, the gravestones of 19 Byakkotai -- teenage samurai fighting for Aizu during the Boshin War -- is a further reminder.  The young fighters committed ritual suicide when from the same hill they saw what they thought to be the city’s castle, Tsuruga-jo, ablaze and their cause to be lost. 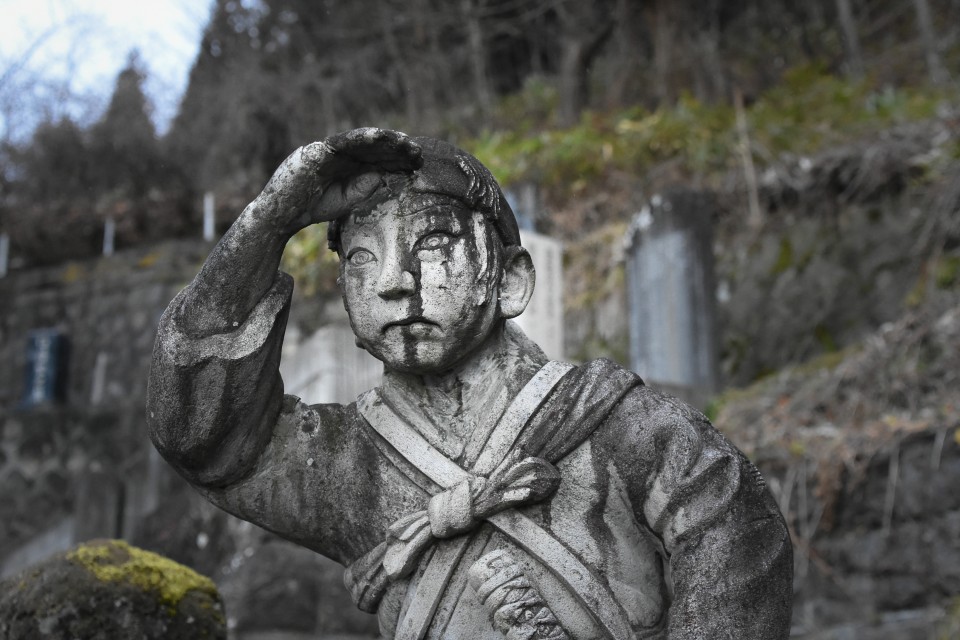 (Byakkotai statue on Iimoriyama looks out over the city of Aizuwakamatsu)

Though less dramatic, loyalty to the city, its traditions and people can be seen today.

In 2007 Keiji Usuki (44) returned to Aizuwakamatsu from a life in Tokyo working in video production to succeed his father in the family business, Yamagataya, producing and selling traditional painted candles.

The industry of painted candles, e-rosoku, which were originally used as offerings for the deceased, has some 500 years of history in Aizuwakamatsu and was developed as a key source of income for the area by samurai of the Aizu clan.  During the Edo-era, wax produced in Aizu accounted for around 60-80 percent of the candle wax used in Edo (now Tokyo), according to Usuki.

Today Yamagataya is one of only five painted-candle makers in the city, but that still makes the area the center of production in Japan, with Usuki speculating there to be only four or five other producers across the rest of the country. 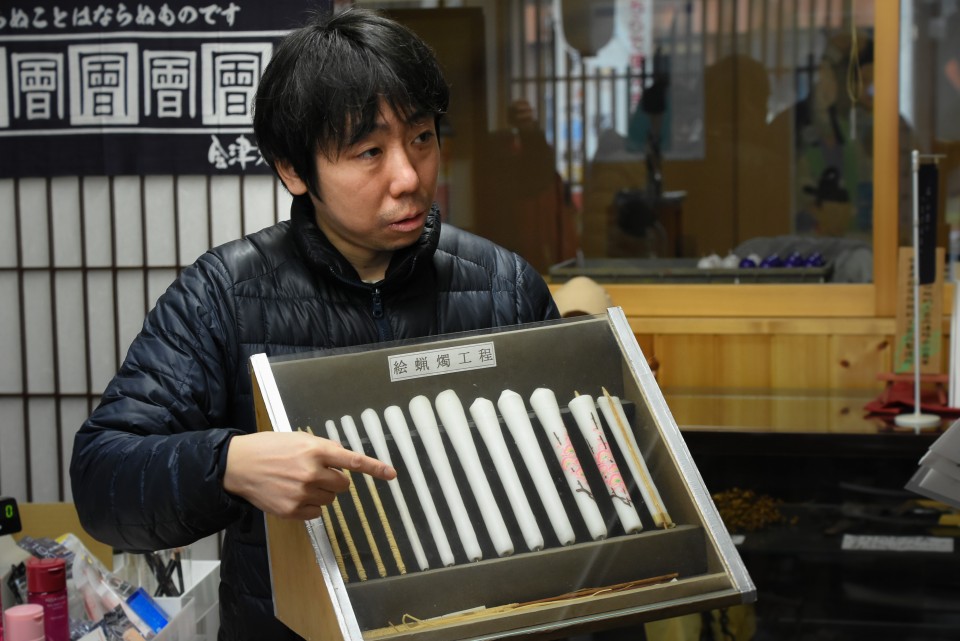 In such circumstances Usuki understood the importance of succeeding his father to keep the business alive.

"When I was living in this area it felt natural, I didn’t think of it as anything new," he said of the role of the business during his youth.

"But when I was living in Tokyo, I looked back and saw the family business and Aizuwakamatsu from afar and I felt differently about it.  The industry is very rare. Not so many people are working in it and I thought it would be a shame to see this tradition decline."

"Some long-established stores have already closed because they were unable to find a successor.  It’s a shame because we now have these beautiful traditional buildings left unused. We have to think about ways in which to bring them back to life."

The local industry suffered further following the Great East Japan Earthquake in 2011 and subsequent nuclear disaster in Fukushima, with rumours about radiation leading to a decline in visitors and less business for the city’s painted candle makers, according to Usuki.

Today Yamagataya gets about 25 percent of its revenue through workshops and visits from school groups coming from the surrounding prefectures.  The candles themselves, of which one worker at Yamagataya produces around 300-400 per day or so, are sold primarily to souvenir stores in the city and the broader Fukushima region. 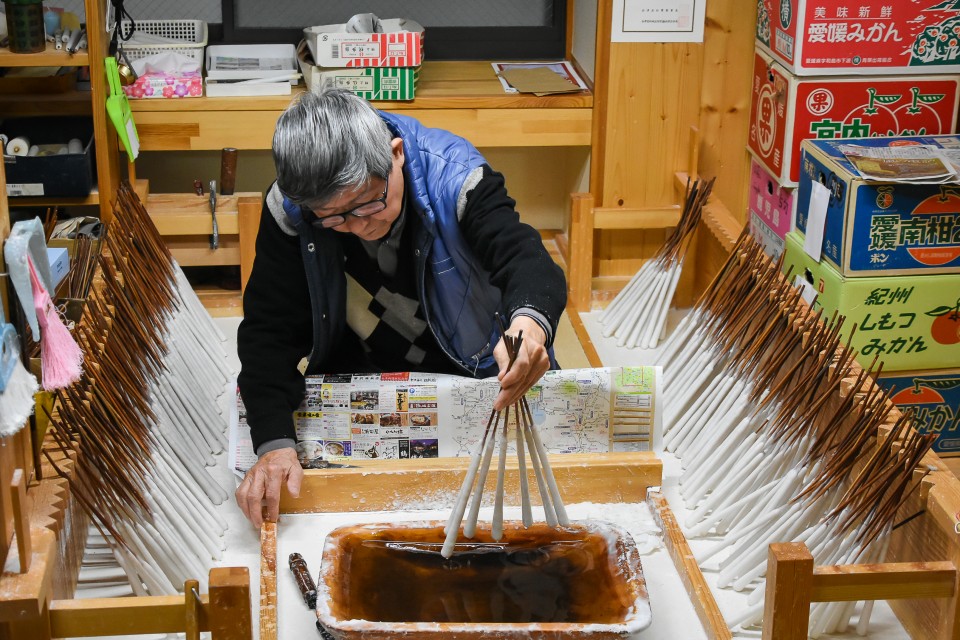 "As a business, it's difficult to live on the income from sales alone.  It's not just candle making. It’s the same with lacquerware (another of the city’s traditional crafts)," explained Usuki.  "The production process is long and hard and isn't matched by the retail value. This is something we need to think about in efforts to preserve the industry."

Despite the challenges though, Usuki said he has yet to use any of the financial support made available by the prefectural government.  Perhaps it's the pride of the samurai in him.

Sake brewing was another industry championed by Aizu clan samurai.  Established during the middle of the Edo Period as part of measures to stimulate the local economy following the Great Tenmei Famine (approx. 1782 - 1788), today the local industry continues to flourish.

In contrast to a typically secretive industry, a sharing of knowledge and progressive techniques between local brewers has seen Aizuwakamatsu help to establish Fukushima Prefecture as Japan’s leading sake producer -- breweries from the prefecture having claimed the most gold medals in the prestigious Sake Competition for seven consecutive years up to 2019.

One of these breweries is Suehiro Shuzo Kaei-gura, established in Aizuwakamatsu in 1850.  In 7th-generation president Shinjo Inokichi (69) the brewery and the city has a larger-than-life figurehead who lists among his family friends the Matsudaira’s, whose lineage includes the first lord of the Aizu Domain.

Nobel Prize-nominated bacteriologist Hideyo Noguchi (born in nearby Inawashiro) was also a visitor to the brewery -- "He liked a drink," said Inokichi -- and tours of Suehiro Shuzo reveal a treasure trove of items accrued by Inokichi's family over the years, including calligraphy written by Noguchi himself and that of Matsudaira Katamori, the final lord of Aizu.

Visitors who also like a drink can do so at the brewery's tasting corner where they can sample up to 10 kinds of sake on any given day including, at the time of visiting, the Suehiro Yamahai Junmai Ginjo a brew chosen by sommelier to be served to world leaders at the 2019 G20 Osaka summit.

"It was amazing," said Inokichi.  "We started getting a lot of orders in from Osaka, and initially I didn’t know why." 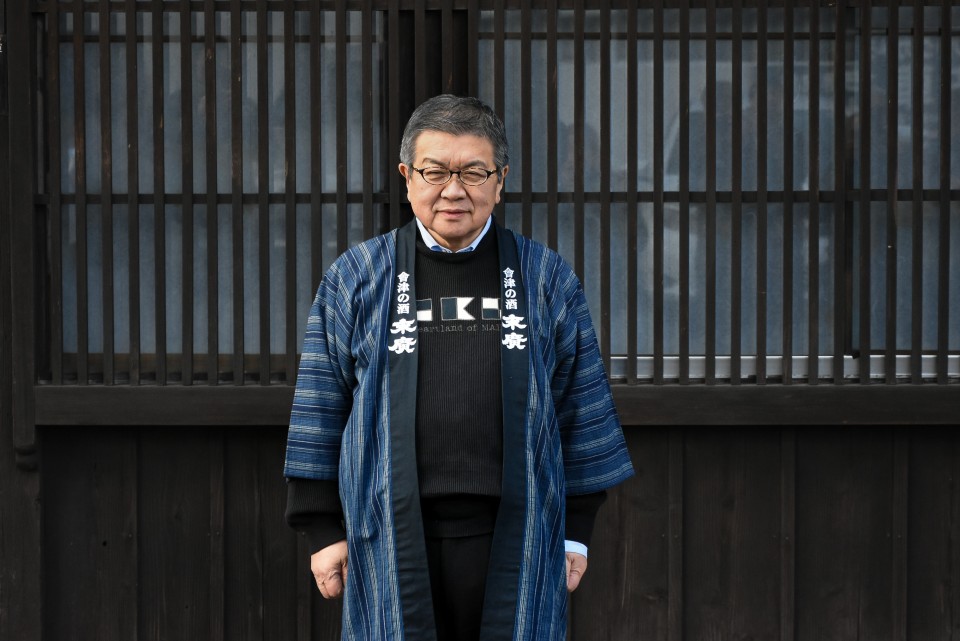 Inokichi's humour perhaps belies the symbolism, from suffering defeat in civil war to having a local product, a legacy of the samurai, representing the country at the highest tables of international governance, a deep-rooted pride would seem to have brought the city a long way.

The people here though appear to remain grounded in their efforts to convey the city's unique, at times tragic, history to the wider world.

After a visit to Fukunishi Honten, a former merchant home in the center of town where  government investment and the donations of private collectors is helping to preserve and exhibit local artifacts, curator Takashi Yoshida was considered when asked about visitor numbers to the facility.

"Should we go the way of popular culture and numbers of tourists or should we focus on real Japanese culture and tradition?" he questioned.  "I remember a time when there were around six million tourists coming to Japan, and now there are over 30 million. I wonder how we got here and if it’s being done in the best way."

"We are doing this to preserve and showcase our identity as the people of Aizu," he said.

Visitors to the city of Aizuwakamatsu then should be wary of any trite Hollywood stylings of the "last samurai" moniker, and instead come prepared to see its real and lasting legacy.