Hakuho trusted his attacking instincts in a lightning victory over Yutakayama as he improved to a perfect 6-0 Friday at the Spring Grand Sumo Tournament.

But the sailing was less smooth for fellow Mongolian-born grand champion Kakuryu, who dropped to 4-2 after losing to No. 2 maegashira Tokushoryu (1-5), the surprise winner of the January tournament. 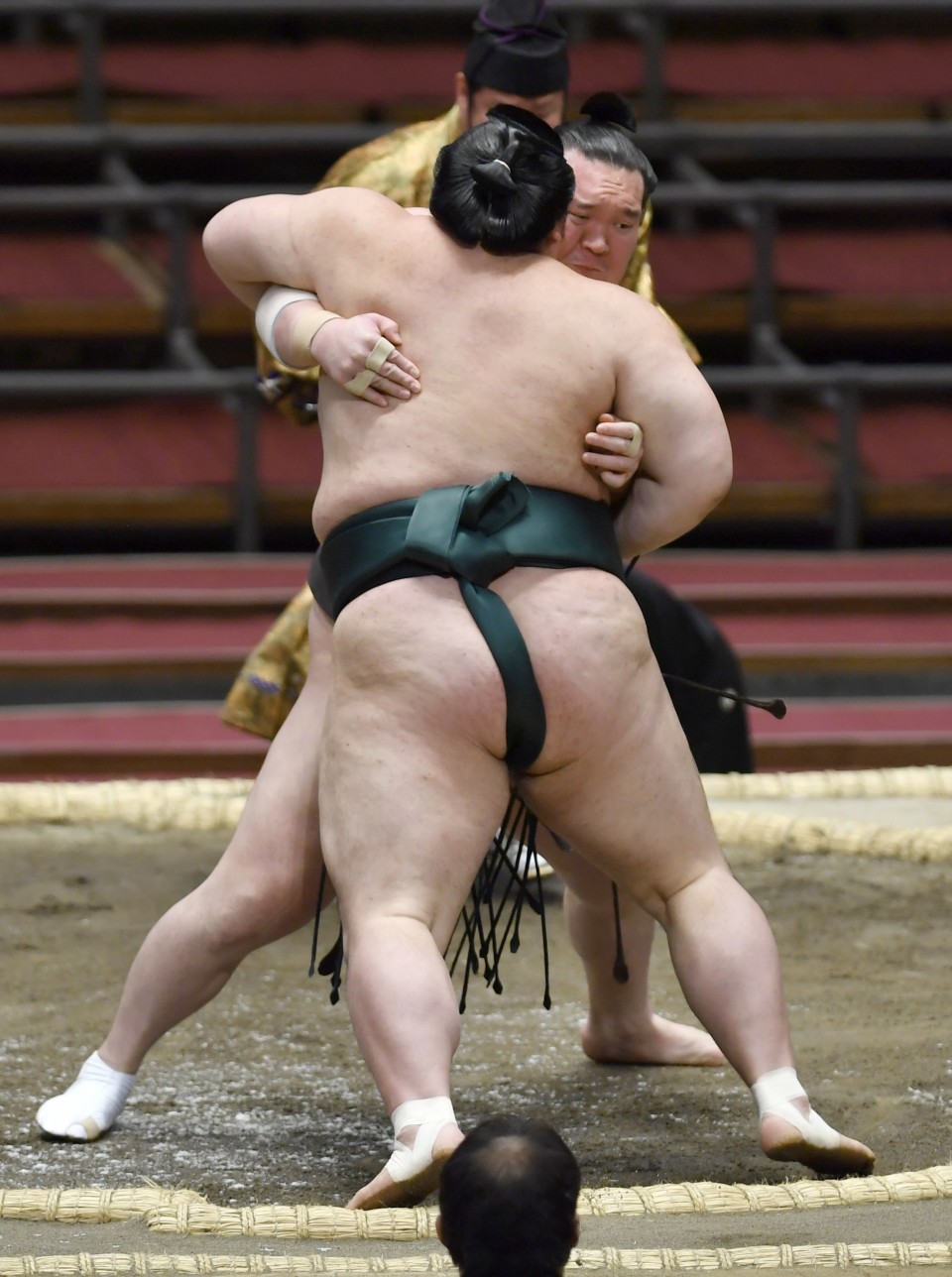 Hakuho, looking for a record-extending 44th grand tournament championship, easily overpowered No. 3 Yutakayama in the penultimate bout of Day 6 at Edion Arena Osaka, where the tournament is unfolding without spectators due to the coronavirus pandemic.

The 35-year-old yokozuna, who had looked less than his best despite remaining unbeaten here, claimed a quickfire victory to go 3-0 in his career against Yutakayama (2-4). After delivering a powerful left-hand slap, Hakuho took a double inside grip and drove the maegashira straight out.

"I finally got to the point where I attacked instinctively, so that was cool," Hakuho said of a bout that didn't take 2 seconds. "It felt like I just pressed the attack at exactly the right moment."

The grand champion will start Saturday in a three-way tie for the lead with rank-and-file grapplers Mitakeumi and Aoiyama. 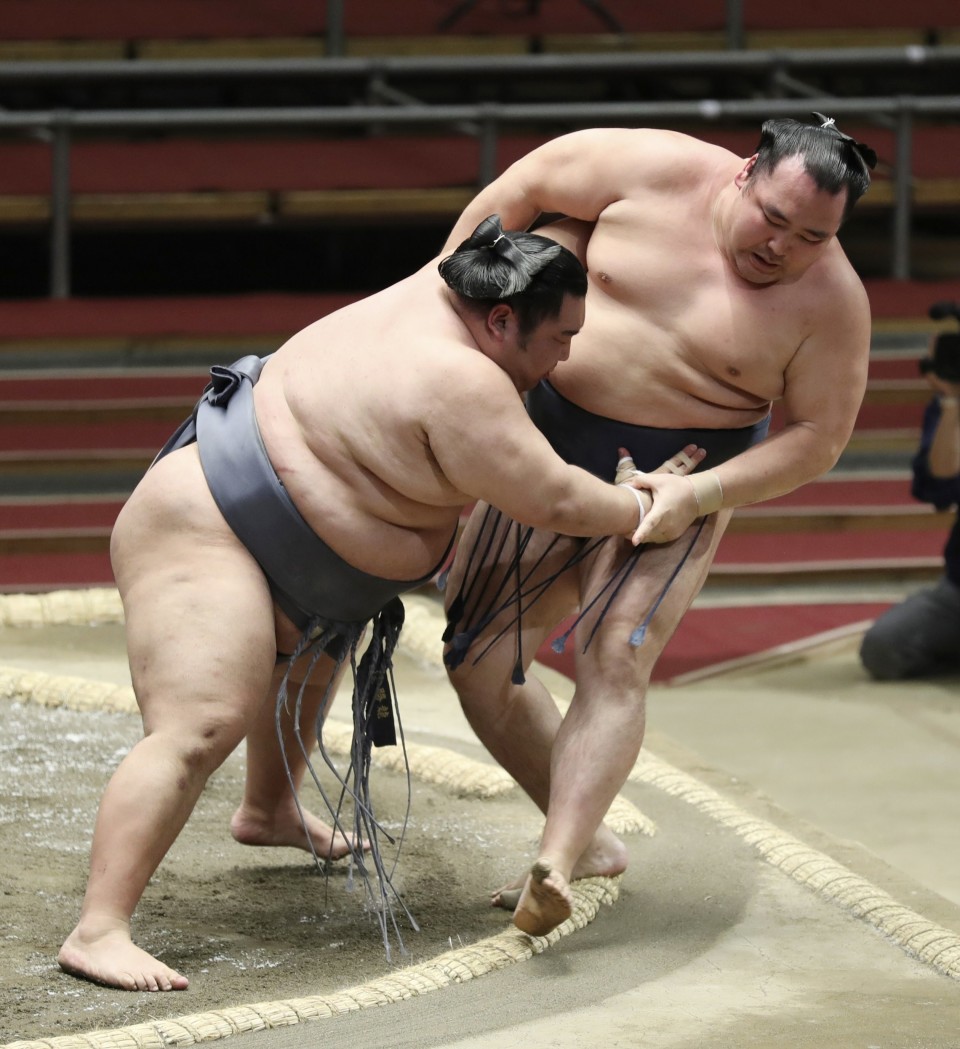 In the last bout of the day, Kakuryu took a belt grip with both arms, but Tokushoryu used his 188-kilogram frame to twist his way out of the hold and bounce the yokozuna over the edge.

Tokushoryu -- who stunned the sumo world by winning the New Year meet from the lowest rank of No. 17 maegashira -- earned his first career "kimboshi" for beating a yokozuna as a rank-and-file wrestler.

The 33-year-old journeyman, whose January title propelled him upward 15 places in the rankings, said he had been determined to rack up a victory following a run of losses against tough opponents here.

"I've lost to several top-ranked wrestlers here, so I was adamant about winning today," said Tokushoryu, adding that his title-winning run was a distant memory.

No. 3 Mitakeumi, who aims to return to the three "sanyaku" ranks below yokozuna, handed sekiwake Asanoyama his first loss of the tournament.

In one of the day's most entertaining bouts, two-time Emperor's Cup winner Mitakeumi took a double inside grip from the jump and withstood multiple throw attempts on the way to a force out victory.

After the pair locked up, Asanoyama dragged the maegashira around the ring and looked primed for an arm throw, but Mitakeumi stayed tight and drove the promotion-seeking sekiwake out.

The 27-year-old Mitakeumi -- who not so long ago was an ozeki aspirant himself -- will face Hakuho on Day 7.

Following consecutive losses, sole ozeki Takakeisho got back on the winning track with an easy thrust out win against wildly popular No. 4 Enho (2-4).

Takakeisho (3-3) used his superior bulk to keep the diminutive maegashira at arm's length, denying him the opportunity to go inside before pushing him out.

Sekiwake Shodai (3-3) suffered his second straight loss, dropping to 3-4 in his career against No. 1 Daieisho. Former komusubi Daieisho (3-3) put on an impressive display of thrusting sumo, maintaining the momentum from the outset for a frontal push out.

The Ishikawa Prefecture native got inside Hokutofuji's defense from the initial charge and used his stronger position to push his opponent out.

No. 13 Aoiyama stayed perfect at 6-0 by slapping down No. 17 Meisei (2-4). The big Bulgarian is on track for his first winning record since last July.