The House of Representatives passed a bill Thursday that would allow Prime Minister Shinzo Abe to declare a state of emergency to deal with the coronavirus outbreak in Japan if needed.

Following its passage through the more powerful of Japan's two chambers of parliament, the bill is set to clear the House of Councillors on Friday. Opposition lawmakers are supporting the bill to ramp up efforts to contain the virus, although criticizing Abe for his slow response to the outbreak.

COVID-19, the illness caused by the virus, has been spreading globally from the central Chinese city of Wuhan, leading the World Health Organization to describe the situation as a "pandemic."

Japan will go ahead with the plan to host the Tokyo Olympics and Paralympics this summer, Yoshihide Suga, the top Japanese government spokesman, reiterated.

The bill to revise the law on new types of influenza and infectious diseases will temporarily give the prime minister the authority to declare a state of emergency when coronavirus infections spread rapidly across the country and raise fears of a grave impact on people's lives and the economy. 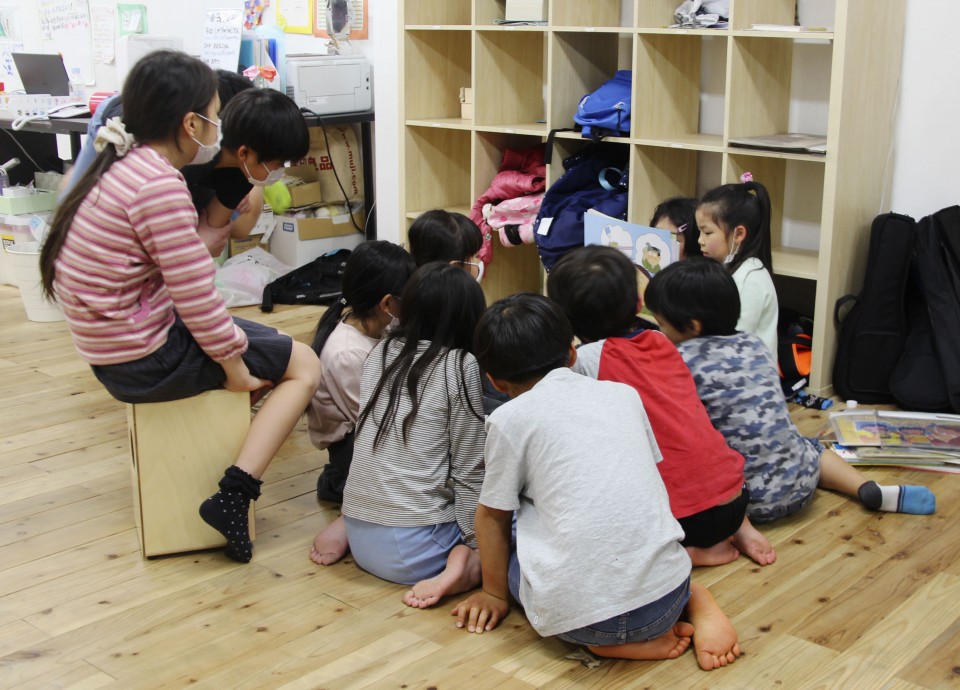 (Children watch a picture-card show at an after-school club in Tokyo on March 3, 2020. Amid the spread of the new coronavirus, they are unable to attend school until after the spring break, but activities such as this are permitted.)

Once a declaration is made for specific areas for a limited period of time, prefectural governors can demand that residents stay indoors and ask for school closures as well as event cancelations.

Local governments can also demand that essential supplies such as medicine and food be sold to them. They can also temporarily take over private land and facilities to provide medical care.

Both ruling and opposition party lawmakers say the government should be cautious about declaring an emergency that would suppress people's rights.

Abe has already requested that all schools shut temporarily until a spring break ends and big events be canceled, postponed or scaled down, but he did so without the legal basis to enforce them.

The government has unveiled a series of support measures for parents who need to take time off to care for their children and businesses hit by the viral outbreak.

Abe has said the envisaged legal change, effective for two years, is designed to prepare for a worst-case scenario. Earlier this week, he told parliament he will carefully decide on whether to declare a state of emergency, considering its potential impact on society.

Abe said Japan is in an "extremely important" time to prevent the virus from spreading further in the country.

On Tuesday, he requested that organizers cancel or postpone big events to reduce group transmission risks for an additional 10 days through late March, raising concern among economists that the economy will take a hit from slowing activity.

A Kyodo News tally showed that seven out of the 18 education boards are going ahead with their initial plans to resume classes next Monday.

The reopening comes amid growing concern that students have been deprived of the opportunity to learn and parents are shouldering the extra burden placed by school closures.

But some local officials say the spreading virus is forcing them to reconsider their earlier plans.

"We believe it's better for the benefit of children to review our plan if the first infection is confirmed in our prefecture," Saga Gov. Yoshinori Yamaguchi said. All public schools in the southwestern prefecture will reopen while private school operators can decide what to do.

The education board in the central Japanese city of Toyama will also enable children to go to school. It cited a recent assessment by a government panel of experts that Japan has not seen infections exploding, adding that no cases have been confirmed in the city.

The total number of domestic cases has surpassed 1,300, including around 700 from the Diamond Princess cruise ship that was under a 14-day quarantine near Tokyo in February.