Abe has pledged to compile the "boldest-ever" package that would exceed the 56.8 trillion yen stimulus at the time of the 2008 global financial crisis. His administration plans to finalize the details by early April and secure funding in an extra budget for fiscal 2020.

The LDP is proposing that fiscal spending should be around 20 trillion yen, compared with the 15 trillion yen in the stimulus package formulated in the aftermath of the collapse of Lehman Brothers Holdings Inc.

The coronavirus outbreak that began in China late last year has already dealt a blow to a weakening economy hit by a consumption tax hike in October from 8 percent to 10 percent. Opposition lawmakers, along with some within the LDP, have been stepping up calls for lowering the tax rate to reduce the burden on struggling households. 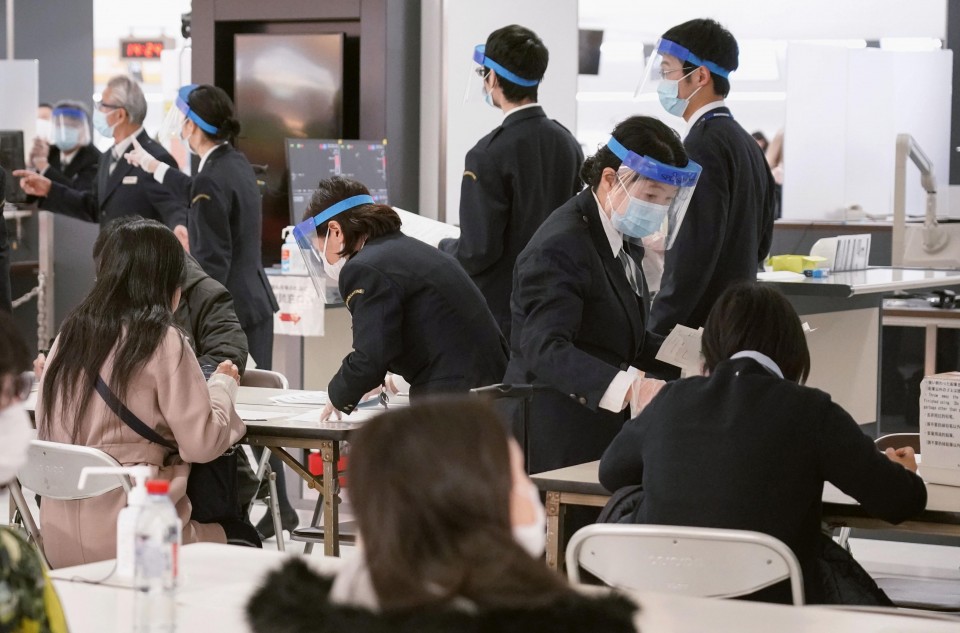 Abe, who went ahead with the twice-delayed tax hike, has sounded negative about lowering it now, casting doubt over its effect.

In its recommendations, the LDP aims to give benefits worth over 10 trillion yen, equivalent to a 5 percentage point cut in the consumption tax rate. Such benefits include cash handouts to households, and subsidies to small and midsized companies and freelancers.

The proposals came after Abe unveiled a plan to give cash to households during a press conference on Saturday, though he said the government would limit eligibility after some lawmakers stressed the need for a nondiscriminatory cash handout scheme.

To expand financial support to small and midsized companies, Abe pledged to provide loans with no interest or collateral at private financial institutions.

The LDP said over 40 trillion yen is needed to ensure companies can have access to funding and to give subsidies to firms that keep jobs despite the difficult business environment.

The compilation of the supplementary budget comes immediately after parliament approved Friday a record 102.66 trillion budget for fiscal 2020 from April.

Restoring Japan's fiscal health, the worst among major developed economies, is being put on the backburner to cope with spending needs in a crisis situation.

Japan has so far avoided an explosive increase in coronavirus infections. While a recent surge in infections in Tokyo has raised alarm, Chief Cabinet Secretary Yoshihide Suga reiterated Monday that the situation does not call for a state of emergency declaration.

The number of infections in Japan has surpassed 2,600, including about 700 from the Diamond Princess cruise ship that was quarantined near Tokyo in February.

Once a state of emergency is declared by the prime minister, local governors can request that residents stay home and restrict the use of schools and other facilities where large numbers of people gather.

To contain the spread of COVID-19, the illness caused by the new coronavirus, Japan will step up border control measures in the coming days.

Japan is planning to place an entry ban on foreigners who have recently been to the United States, China, South Korea and most of Europe, government sources said.

The measure would apply to foreign nationals who have been to any of the listed regions within 14 days of arriving in Japan.

All Japanese returnees and foreigners who have traveled outside the banned areas will be asked to self-quarantine for 14 days and watch for symptoms of COVID-19, according to the sources.

Some areas of China and South Korea such as Hubei Province and Daegu as well as more than 20 European countries had already been subject to an entry ban imposed by Japan.

Coronavirus cases have surged in the United States, which has overtaken Italy and China to become the country worst-hit by the pandemic that has killed more than 33,000 globally, according to data compiled by Johns Hopkins University of the United States.

Other parts of Europe such as Spain and Germany have also been heavily impacted.