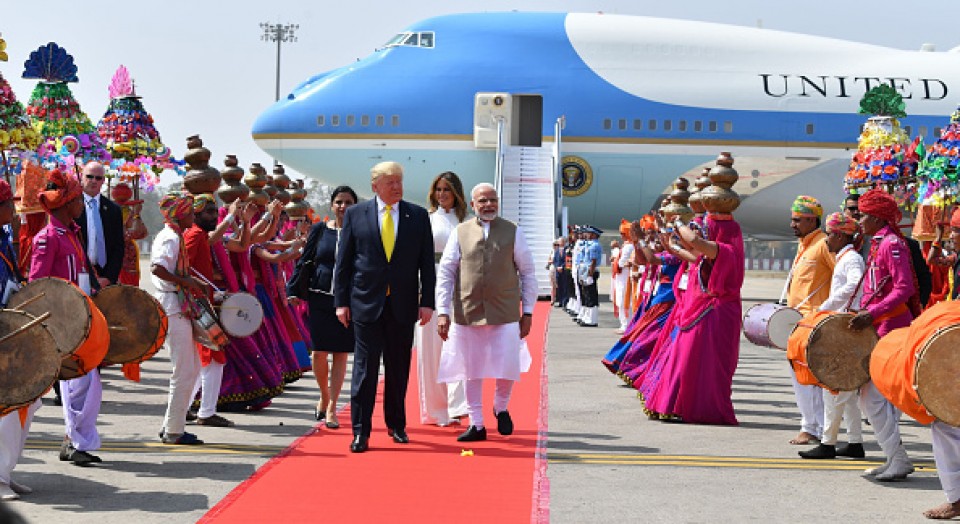 Trump, at a press conference with Modi held to wrap up his two-day visit, said it yielded agreements for India to purchase more than $3 billion of advanced American military equipment, including Apache and Seahawk helicopters.

"These deals will enhance our joint defense capabilities as our militaries continue to train and operate side-by-side," he said.

On the two countries' efforts to reach a comprehensive trade agreement, Trump said, "Our teams have made tremendous progress...and I'm optimistic we can reach a deal."

He stressed the need for bilateral economic ties to be "fair and reciprocal," while boasting that since he took office in January 2017, U.S. exports to India are up nearly 60 percent, with energy exports leading the way.

Modi called India-U.S. ties "the most important partnership of the 21st century." Trump, for his part, said the bilateral relationship "has never been as good as it is right now."

"Today, President Trump and I have taken a decision to raise our partnership to the level of a 'comprehensive global strategic partnership,'" Modi said.

Praising increased defense and security cooperation between India and the United States, he said, "Cooperation in ultra-modern defense equipment and platforms will enhance India's defense capabilities. Our defense manufacturers are becoming a part of each other's supply chains."

Trump said he and Modi "affirmed our two countries' commitment to protecting our citizens from radical Islamic terrorism," while alluding to mutual concerns over Pakistan-based terrorists.

He noted that a high-level Quad meeting has already been held under his presidency to discuss such matters as "expanded cooperation on counterterrorism, cybersecurity and maritime security to ensure a free and open Indo-Pacific."

Trump also alluded to Japan and Australia as partners in creating the "Blue Dot" infrastructure network, which he described as "a major initiative to ensure countries around the world to have access to private-sector-led, sustainable and trustworthy options for high-quality infrastructure development."

The joint project, launched at a regional meeting in Bangkok last November, involves U.S. Overseas Private Investment Corp. in partnership with Australia's Department of Foreign Affairs and Trade and the Japan Bank for International Cooperation.

Trump said a secure 5G wireless network is of particular concern, and care must be taken to ensure that the emerging technology not "do anything where it could be even conceived as a conduit for suppression and censorship."