As Japan deals with one of the worst outbreaks of a new coronavirus outside China, foreign tourists here remain largely confident -- for the moment -- that they will be safe in the country.

There were over 70 confirmed cases in Japan as of Wednesday, the third highest number after China, where the virus originated, and Singapore. The figure does not include the 621 cases among passengers and crew aboard the Diamond Princess, a cruise ship quarantined until Wednesday in Yokohama, which the World Health Organization regards as having occurred on an "international conveyance."

A New Zealander at Tokyo Tower, one of the Japanese capital's major sightseeing spots, said that while her parents tried to stop her from traveling, she does not have any concerns about the outbreak.

"It doesn't sound that deadly, as long as you're relatively healthy and keep washing your hands," said Alur Saguinsin, 21, an engineering student, referring to COVID-19.

She had originally planned to transit in China on her way home but changed her plans at the last minute due to travel restrictions now in place for arrivals from the Chinese mainland.

A couple from France, also visiting the tower, had called the French defense ministry and texted a Japanese acquaintance in mid-January to make sure it was safe to visit.

"We were worried at first, but not now, we feel safe. In France we have the flu and a lot of people die," said Elodie Haouas, 36, as her 35-year-old husband Omar procured a miniature bottle of hydroalcoholic gel from his bag with a grin. 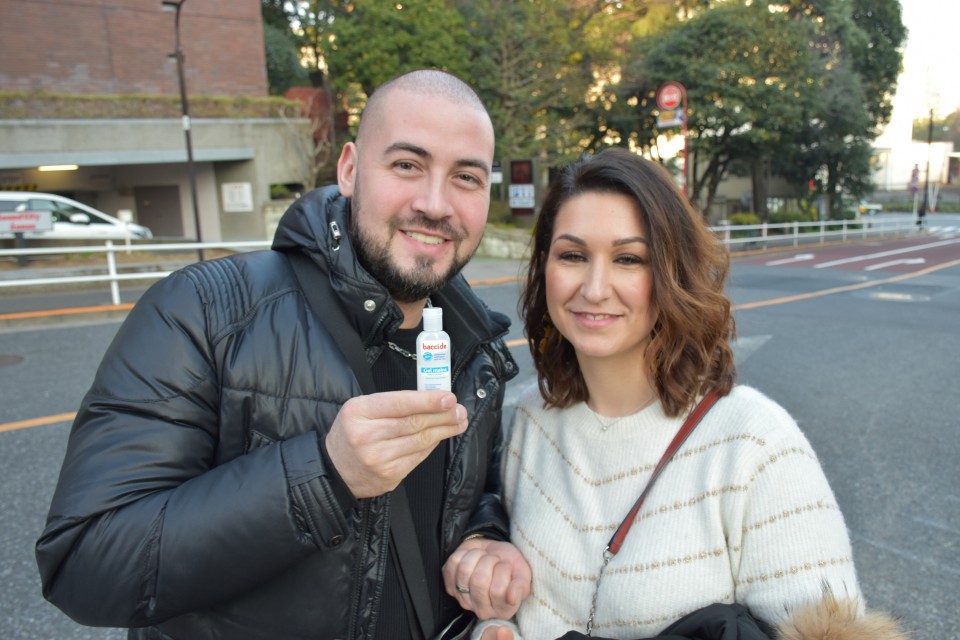 Peggy Reed, who was visiting from the United States with her daughter, said she has no plans to cancel their skiing trip in northern Japan.

"I would not go to China now, but I'm no more worried being here than I would be in New York. I think it's made into a bigger deal. We wash our hands a lot. I'm not particularly worried," the 46-year-old said.

Some travelers from Australia were likewise unfazed by the virus outbreak, with Japan still listed at the lowest risk level on the government's official travel advisory website.

A 23-year-old Australian university graduate who gave her name as Lou B. expressed only mild concern as she waited with her sister Gabby, 21, by the iconic scramble crossing in the Shibuya entertainment district. 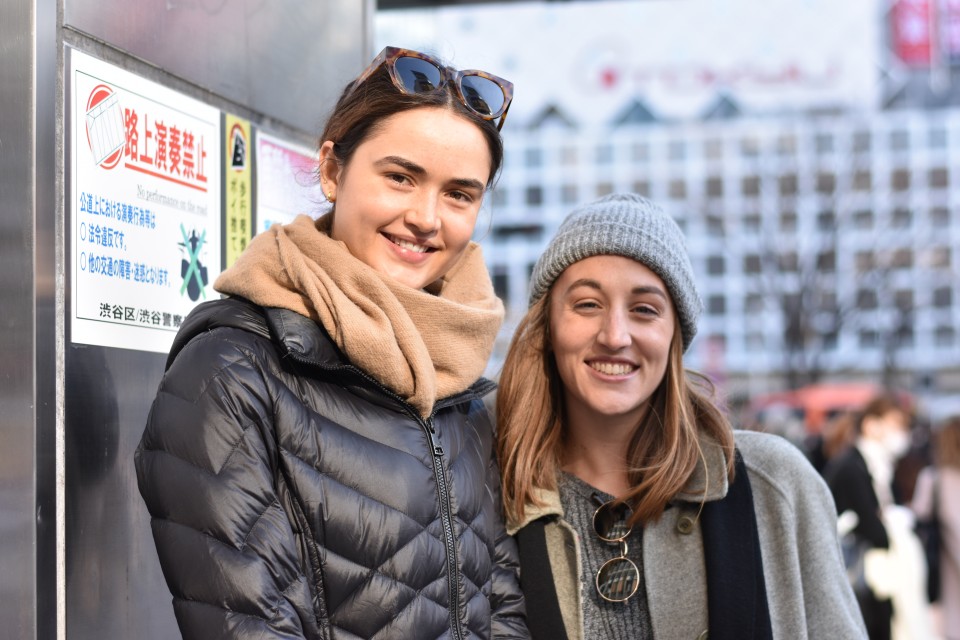 Gabby said that while she may face some quarantine restrictions on her return to Australia since she works in a hospital, the pair would have still chosen to come at this time.

"We would just have brought more masks and hand sanitizers. Although, we both travel a lot so I feel hand sanitizers would have been normal to take anyway," said Lou.

Another pair from Australia, a young couple in their 20s, said they came in February for the snow and would be heading to Hokkaido as planned.

His girlfriend Abby Bush, 22, felt that information on the virus was sufficient, saying "You just have to do your own research, find your own news sources." 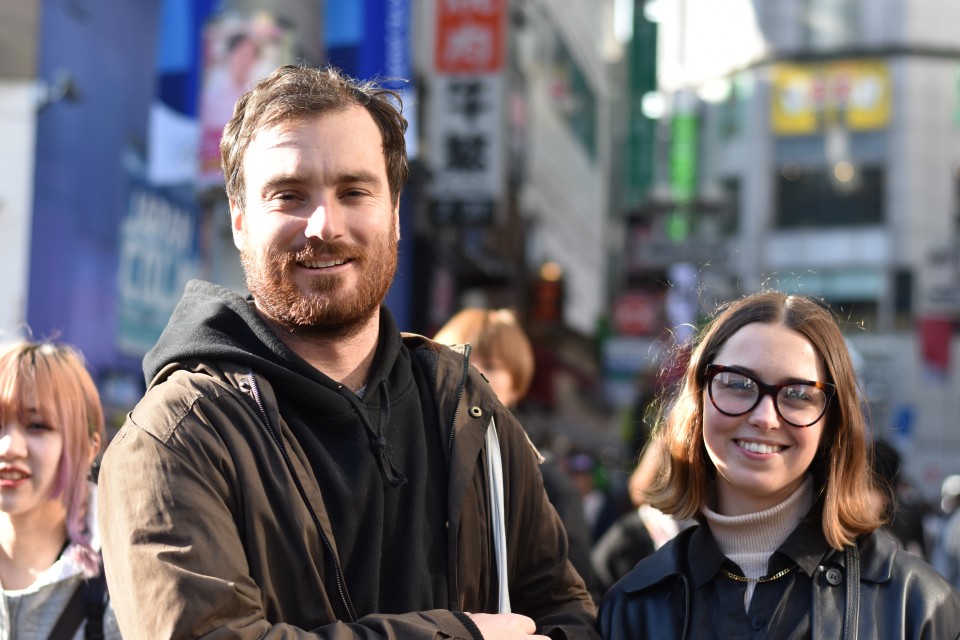 A recent survey on foreign visitors to Japan found that 55.5 percent of those surveyed had to search for information about the new coronavirus outbreak on their own.

Of the 256 respondents, 66.8 percent said they tried to collect information on the epidemic through websites from their home countries, followed by 55.1 percent who relied on social networks and online communication with friends.

Two visitors from the Philippines who gave their names as Gerard M., 35, and Mark P., 32, said they had received more information than the average citizen on the virus as they work in a hospital.

"We get upper level information directly from the Department of Health on prevention and care," said Mark, as he and his travel companion posed for photos with the famous Hachiko dog statue at Shibuya Station right by the scramble crossing. 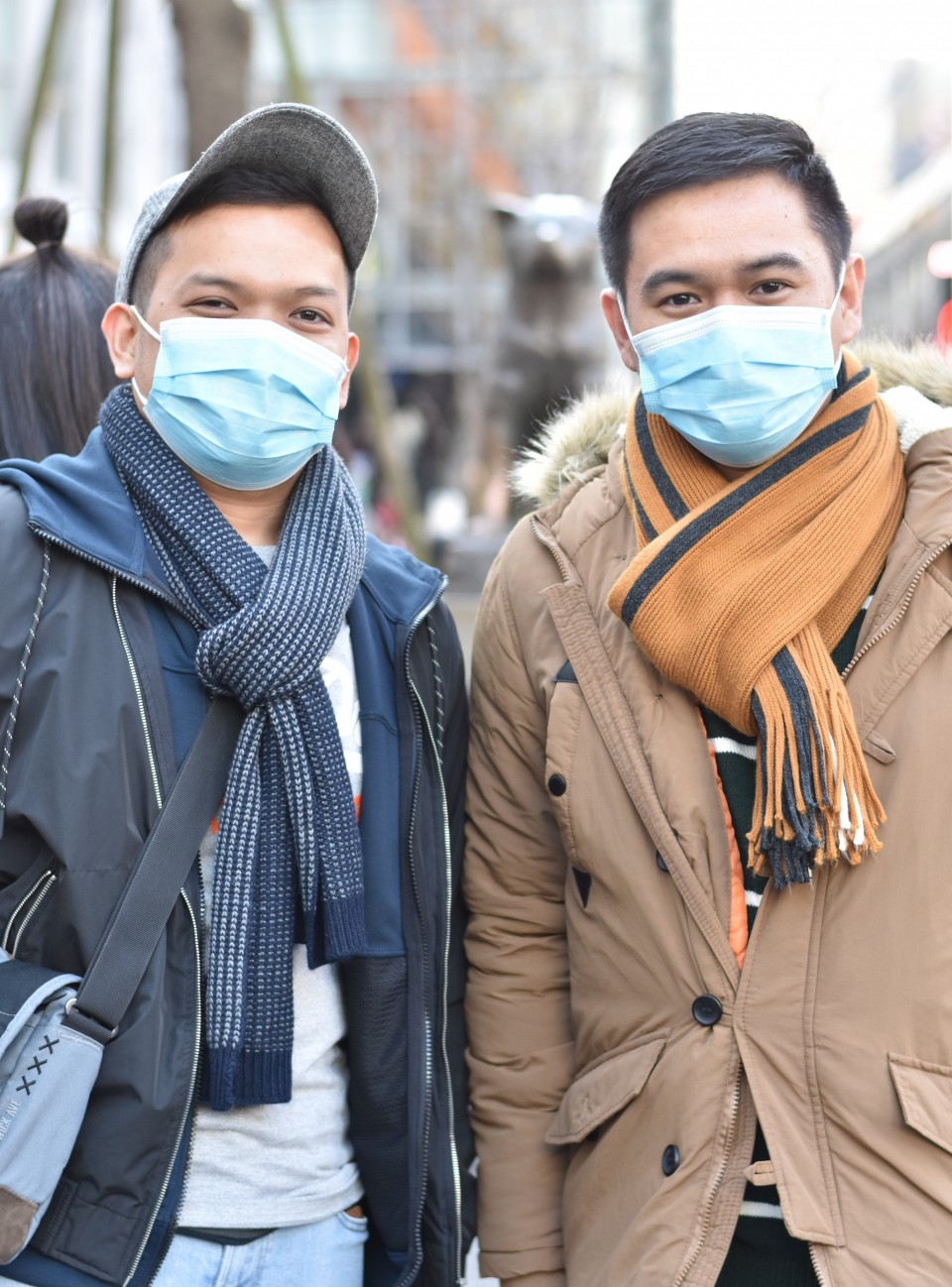 Both sporting surgical face masks, they said they booked their trip last November and would have postponed their holiday if they had known such a virus outbreak would occur.

"We were a bit worried because of Japan's high number of cases," said Gerard. "But we still didn't hesitate to come (in the end)."

According to data released Wednesday by the Japan Tourism Agency, the estimated number of foreign tourists to Japan only dropped 1.1 percent in January from a year earlier, with visitors from China hitting a record high for the reporting month at 924,800, up 22.6 percent.

But the February figure is expected to nosedive following the Chinese government's ban on group travel and some individual trips overseas from Jan. 27 to curb the spread of the pneumonia-causing virus.

Japan's regional economies are already feeling the pinch, with the annual snow festival in the northern Japanese city of Sapporo, popular among Chinese travelers, seeing visitor numbers plunge some 710,000 through Feb. 11 -- to 2.02 million -- compared with last year.

According to the Hokkaido prefectural government, at least around 147,000 guests have cancelled accommodation bookings in Sapporo and other cities in the district for stays up until March.

Chinese at present account for 30 percent of the total number of foreign visitors to Japan and have been the largest group since 2015.

Some of those still able to travel were thankful that Japan has not implemented a blanket ban on all visitors from China, where the death toll has exceeded 2,000 in over 75,000 infection cases. The vast majority of new deaths and infections have been reported in the central Chinese province of Hubei, whose capital, Wuhan, is the epicenter of the outbreak.

"I'd like to thank the Japanese government, since as the virus spread wasn't serious in my hometown, I could come to Japan as planned," said Wang Xiaojie, 55, who hails from Liaoning Province in northeast China.

Japan has currently only banned entry of those who hold passports issued from China's Hubei or Zhejiang provinces, and foreign nationals who have visited the two provinces in the last 14 days.

Wang said she watches the news every day and checks China's social networking platform WeChat to keep up with information on the virus.

Her one concern during her stay was that Japan was not offering enough information on the virus to foreign visitors, she said near a drugstore in Tokyo's Shinjuku district.

Cheng Min, 30, who flew from Shanghai to Tokyo with two family members on Jan. 20, was a little more concerned about the spread of the virus in Japan.

"The viral outbreak nearly delayed our trip for a month," she said in Tokyo's Ginza district, adding that the family had only left their guesthouse to get food during the entire trip.

It was only with one day to go before their departure that she came out to do some clothes shopping in the district's upscale shops.

Jin Liping and Cheng Rongxin, both 27, arrived from the southwestern Chinese city of Chengdu on Feb. 9 to celebrate Valentine's Day in Japan and mark 3,000 days since they first met.

The couple ended up staying longer than they had initially planned after their original accommodation choice canceled bookings from China over virus fears.

"We'd been looking forward to this day for a long time and having a wonderful trip, but we didn't expect the virus outbreak," Cheng said.

(Reito Kaneko and Su Xincheng contributed to this story.)