The International Monetary Fund on Wednesday warned that economic impacts from the new coronavirus outbreak in China could spill over into the global economy, and called for international collaboration to contain the economic damage.

In a report released ahead of a meeting of finance chiefs from the Group of 20 major economies in Saudi Arabia, the IMF said global growth appears to be "bottoming out" and the projected recovery is "fragile" amid some downside risks. 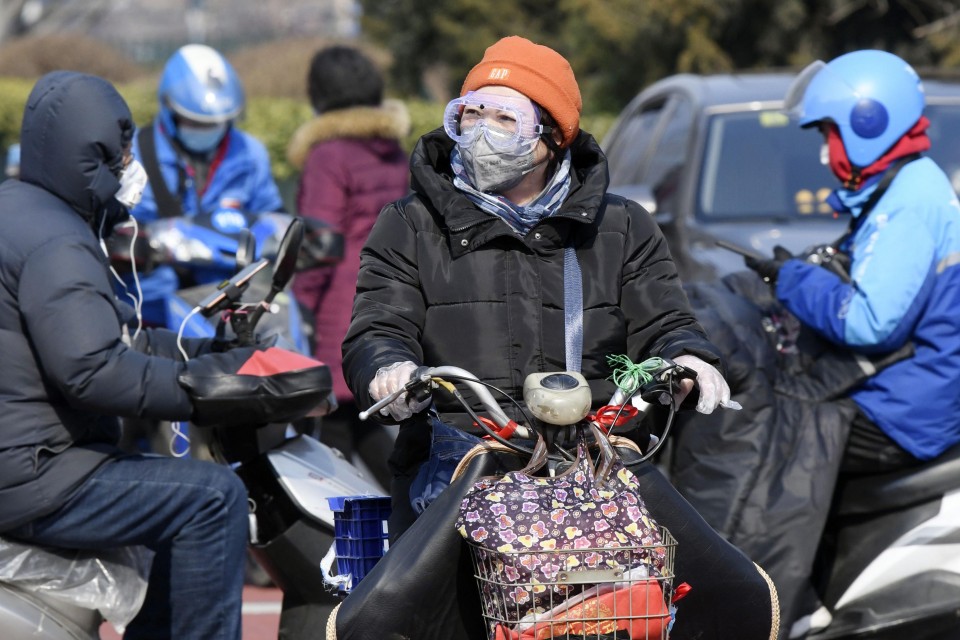 (People wear goggles and masks while riding motorcycles in Beijing on Feb. 19, 2020, amid fears over the spread of a new coronavirus.)

"Several headwinds continue to hold back growth. The coronavirus, a human tragedy, is disrupting economic activity in China as production has been halted and mobility around affected regions limited. Spillovers to other countries are likely -- for example through tourism, supply chain linkages, and commodity price effects," the Washington-based institution said.

On China, the IMF said that the "current scenario" suggests that "the spread of the virus will be contained quickly, with a bounce-back later in the year as pent-up demand spurs economic activity," as seen in the case of the SARS outbreak in 2002-2003.

But it also said there are risks of other scenarios, in which "a wider and more protracted outbreak or lingering uncertainty about contagion could intensify supply chain disruptions and depress confidence more persistently, making the global impact more severe."

The IMF emphasized the importance of global collaboration not only to bring the deadly virus under control but also to "contain the economic damage and strengthen our capacities to react to future epidemics wherever."

The report is expected to serve as a springboard for discussions when the G-20 finance ministers and central bank governors meet for two days through Sunday in Riyadh to assess the situation of the global economy.

The death toll from the new pneumonia-causing coronavirus has reached over 2,000 in mainland China, exceeding the 774 deaths globally in the severe acute respiratory syndrome epidemic. The virus has also spread to more than two dozen countries.

In an update of the World Economic Outlook report in January, the IMF projected global growth to be 3.3 percent in 2020, as compared to 2.9 percent last year.

By country, the IMF has forecast that Japan's economy will grow 0.7 percent this year, supported by stimulus measures to mitigate the impact of a consumption tax hike in October, and that the Chinese economy will expand 6.0 percent.

The IMF said in the Wednesday report that a partial trade deal signed between the United States and China in January has somewhat reduced "short-term uncertainty" and led to an upward revision in growth projections for China.

But it added that the so-called phase one deal is not enough to fully resolve the trade dispute between the two economic giants, with some of the punitive tariffs imposed on each other during the trade war still remaining.

"Thus, trade restrictions and lingering uncertainty over trade policy continue to act as a drag on investment and sentiment," the IMF said.

Under the phase one deal, the United States alleviated some of its punitive tariffs imposed on Chinese goods in exchange for Beijing's commitment to make additional purchases of U.S. products and strengthen intellectual property protections.