During the talks in the United Arab Emirates capital Abu Dhabi, Abe briefed the crown prince about Japan's deployment of a destroyer and reconnaissance planes to waters in the Middle East, excluding the Persian Gulf, to safeguard commercial shipping, Japanese officials said.

The crown prince hailed Tokyo's role in ensuring maritime safety and pledged to offer cooperation as a country in the region.

Located near the Strait of Hormuz, a critical sea lane, the UAE is the second-largest crude oil supplier to Japan, which relies on the Persian Gulf state for about a third of its imports. A series of attacks on tankers, including one operated by a Japanese firm, have taken place near the strait.

Abe expressed gratitude for the UAE's efforts for a stable oil supply to Japan, and the crown prince replied that he will continue to put a great deal of consideration toward that end, according to the officials. 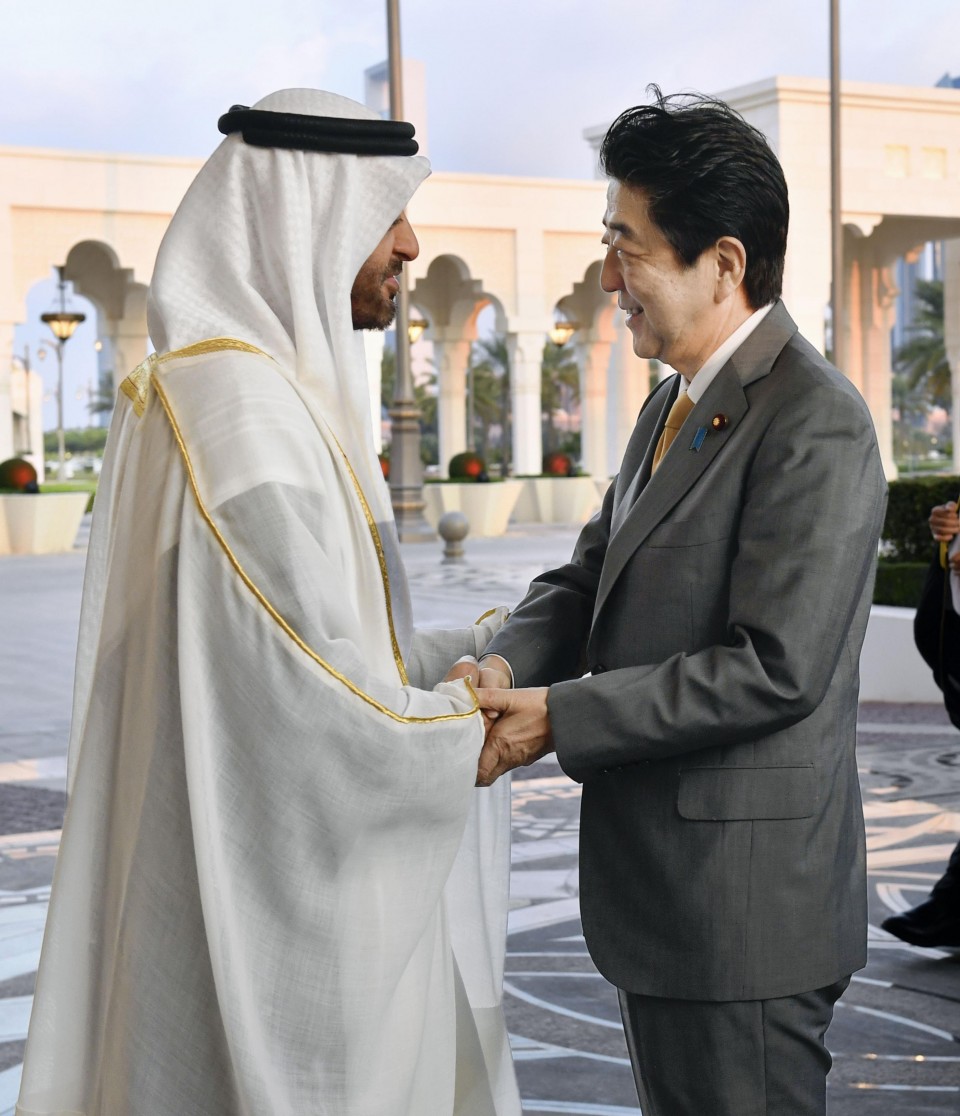 With stability in the Middle East a priority for Japan, Abe has been stepping up diplomatic efforts to reduce tensions that recently spiked when the U.S. killing of a top Iranian commander was followed by Tehran's retaliatory missile strikes against Iraqi bases hosting American troops.

Abe told the crown prince that he is "deeply concerned" about the rising tensions in the Middle East and said that Japan is ready to play a role in defusing them.

The crown prince told the Japanese premier that the UAE will make diplomatic efforts in coordination with relevant countries.

The UAE is the second leg of Abe's five-day trip to the Middle East aimed at stressing the importance of diplomatic efforts in de-escalating the situation in the region.

Abe visited Saudi Arabia for talks with King Salman and Crown Prince Mohammed bin Salman on Sunday, during which the premier expressed concern about the consequences of a military confrontation and sought Saudi Arabia's help in stabilizing the region.

As Japan's own initiative, independent of a U.S.-led maritime security coalition, the Self-Defense Forces will be deployed on an intelligence-gathering mission to the Gulf of Oman, the northern part of the Arabian Sea, and the Bab el-Mandeb Strait connecting the Red Sea and the Gulf of Aden.

Both Saudi Arabia and the UAE have joined the U.S. initiative.