Japan confirmed Friday a second infection related to a deadly new coronavirus, rushing to take preventive steps against the outbreak in China ahead of an expected influx of tourists from that country during its Lunar New Year holiday.

The patient was a man in his 40s visiting from Wuhan, the central Chinese city where the virus originated, the Ministry of Health, Labor and Welfare said, adding he had been hospitalized in Tokyo and was in a stable condition.

The infection was confirmed on the first day of the holiday, during which Chinese people are expected to make 3 billion trips. More than 7 million people are likely to travel overseas during the weeklong holiday, including to Japan.

The Foreign Ministry, meanwhile, cautioned against traveling to Hubei Province, raising the warning level to 3 on its four-point scale. The ministry had issued a level 2 warning for Wuhan, the provincial capital, on Thursday, advising against nonessential travel.

More than 700 Japanese nationals reside in or are currently visiting Wuhan, according to the ministry.

Japan confirmed its first infection related to the pneumonia-causing virus on Jan. 15, a Chinese national in his 30s who returned to his home in Kanagawa Prefecture after traveling to Wuhan.

The second patient arrived in the country last Sunday after contracting a fever five days before and had not left Tokyo since visiting a hospital on Monday, according to the health ministry.

The man, whose symptoms had eased by the time he arrived in Japan, had visited a hospital in China on Jan. 15 and Jan. 17. 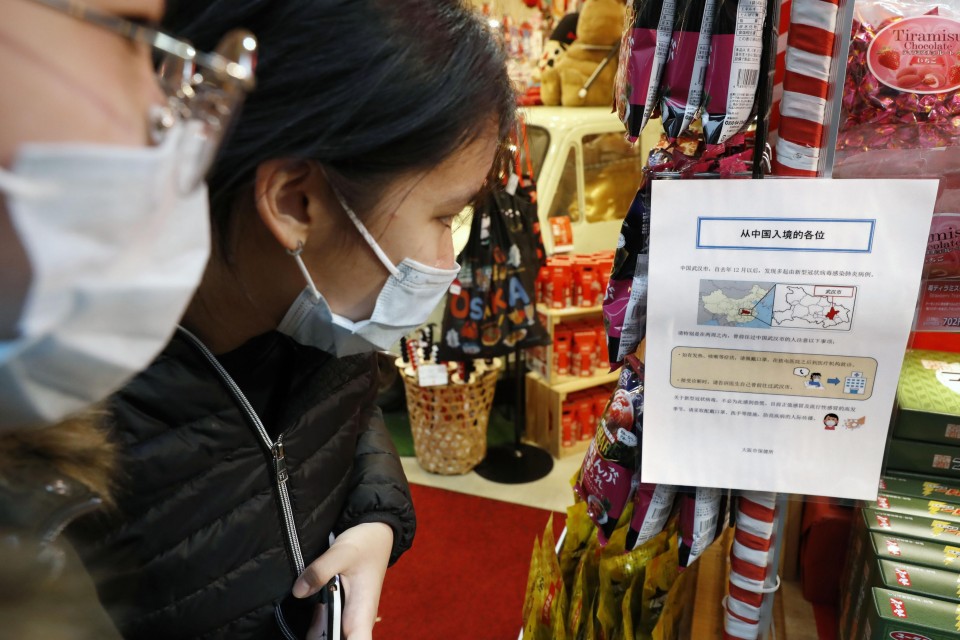 (Photo taken in the Dotonbori commercial district in Osaka on Jan. 23, 2020, shows tourists from Shanghai looking at a notice written in Chinese regarding the spread of pneumonia caused by a new coronavirus in the city of Wuhan in central China.)

He visited a hospital in Tokyo on Monday, and as he continued to have a fever and a sore throat returned for another checkup on Wednesday, when he was diagnosed with pneumonia.

The man was transferred to a different Tokyo hospital and the National Institute of Infectious Diseases confirmed that he had tested positive for the virus, which has killed at least 26 in China and infected around 900 in Asia and the United States. The institute informed the health ministry of the infection around 1 a.m. Friday.

The patient said he had mostly stayed in his hotel room and that he wore a mask when going outside, according to officials. He also said he had not visited the seafood market in Wuhan linked to the initial outbreak, they said.

Two family members he traveled with and around 20 medical staff who have been in close contact with him are being monitored, according to the health ministry. They have not shown any symptoms such as a high fever, it said.

Some businesses in Japan are now requiring employees to wear masks or asking customers to wash their hands and gargle. All Nippon Airways Co. canceled all flights between Wuhan and Narita near Tokyo through Feb. 1, affecting around 2,400 people.

China has stepped up measures to contain the outbreak, imposing travel restrictions in Wuhan and nearby cities, and reportedly building a new 1,000-bed hospital to treat infected people.

Foreign Minister Toshimitsu Motegi said at a press conference the Japanese and Chinese governments are "working together at various levels," without providing details.

The World Health Organization on Thursday called for urgent measures but said the situation is not yet a global health emergency.

Coronaviruses usually cause common cold symptoms affecting the nose, sinuses or upper throat and are spread through sneezing, coughing or direct contact.

The new coronavirus is spreading in Asia and beyond after reports of mysterious pneumonia cases in Wuhan surfaced in late December. Cases of infection have been confirmed in Japan, Taiwan, Singapore, Vietnam, Macau, Hong Kong, Thailand, South Korea and the United States.