Unshaken by a slowing economy, millions of Chinese tourists are expected to continue to venture overseas during the upcoming Lunar New Year holiday, driving popular destinations to scramble to accommodate.

This year, an escalating new coronavirus outbreak that originated from China's central city of Wuhan and quickly spread to neighboring countries like Japan and Thailand as well as across the Pacific to the United States, has added complications to travelers and facilities like airports and embassies.

Last year, over 6.3 million people traveled overseas during the holiday, up 12.48 percent from 2018, according to the Chinese National Immigration Administration. Ctrip.com expects a similar number of tourists to travel to over 400 cities in more than 100 countries in the coming days, with Japan ranking first regionally.

This year's holiday officially takes place from Jan. 24 to 30, but the travel season is expected to last well into February. 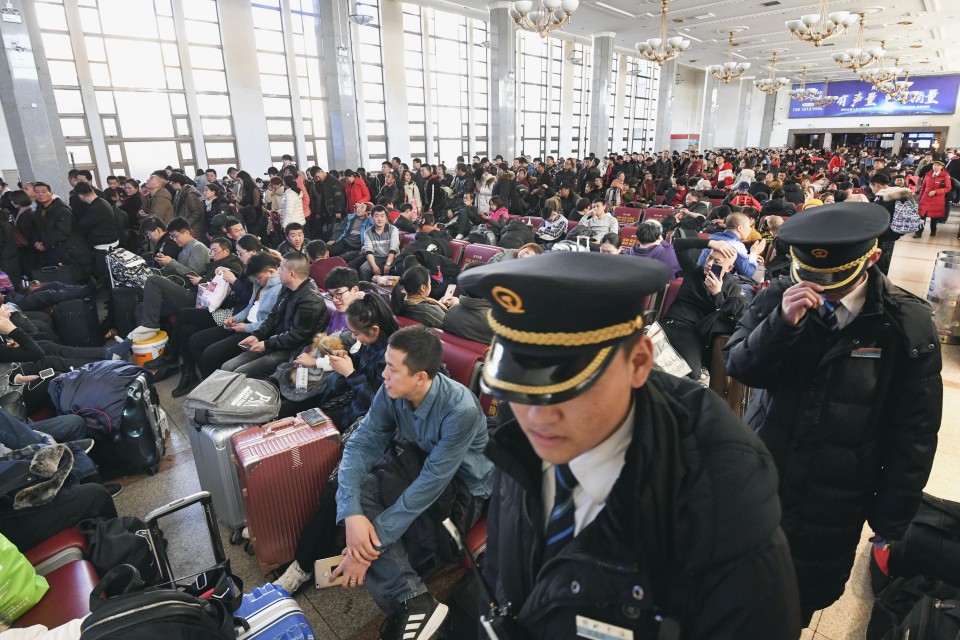 (Travelers crowd the Beijing railway station on Jan. 21, 2019, ahead of the Spring Festival, or Chinese Lunar New Year)

While most Chinese spend those days visiting relatives, an increasing number of people use the weeklong break to travel abroad, making it one of the busiest seasons for embassies and consulates issuing visas to Chinese citizens as well as airports in popular tourist destinations like Japan, Australia and Thailand.

Unable to accommodate the mass influx in visa applications, the Philippine Embassy in Beijing had to turn away travelers beginning mid-December, forcing some to change vacation plans.

For Sandy Li, a public relations manager in her late 20s, this nearly cost her whole vacation.

"The embassy told me that they had to cancel fast-track processing and limit walk-in visas to only the first 30 people per day because hundreds of people were lining up," Li said, adding that she had to rebook her flights and hotels.

"Luckily, I could change the hotel reservations for free. But changing the flights did cost me a bit," she said, explaining that the airline originally tried to charge her $1,300 to change her flights but by canceling and rebooking new flights, she was able to keep the extra costs down to about $150.

But visa issues are not the only thing forcing people to change travel plans or making embassies hustle this year.

The new coronavirus, which has taken lives and infected hundreds of people across China so far, is causing some to abandon their travel plans and airports and embassies to implement new precautionary measures to prevent the spread.

"I'm not leaving Beijing nor my house for the next week," said a Chinese man in his 40s who was considering traveling to Shanghai for a couple of days, until the virus was confirmed in both Beijing and Shanghai.

For those who planned to visit Wuhan, some airlines, railways, travel agencies and hotels are offering refunds after the Chinese health authorities confirmed the disease can be transmitted between humans.

Embassies of Japan, Singapore, and the United States among others in Beijing have issued health advisories warning their citizens who have traveled to Wuhan to seek medical care right away if they feel sick with fever, cough or difficulty breathing.

Airports around the world are also on high alert, carrying out stricter screening measures for passengers arriving from China, including having them fill out questionnaires and taking their temperatures.

But many Chinese passengers are already taking precautionary measures themselves by wearing surgical masks and carrying hand sanitizers.