"There are many ways to ask your passengers to fasten their seat belts. The easiest is to say 'seat belt please' but you should never add the word 'take' as it then means you want that to be stolen," said an English teacher in Japanese, with a subtle smile.

With the Tokyo Olympics half a year away, just like athletes, a wide array of business sectors in Japan are ramping up their preparations.

The taxi industry, which has recently benefited from more inbound tourists, is a leading example of those regarding the quadrennial extravaganza as a once-in-lifetime opportunity to maximize profits. 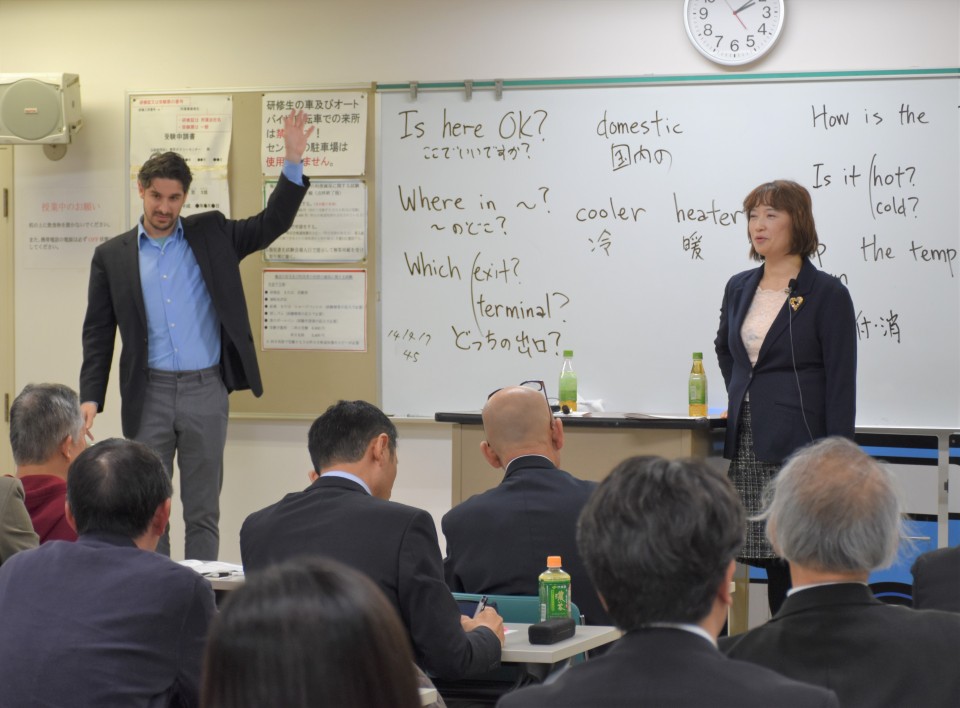 One day in January, a classroom in Tokyo was packed with taxi drivers taking a practical, serious and above all humorous English lesson taught by a pair of teachers, an American and a Japanese.

The students, mostly middle-aged men, were instructed to remember a number of short but important phrases such as "keep the change."

"Everybody, if I say keep the change, I want you to say out loud 'thank you so much' with feelings of gratitude," said the Japanese teacher, Chiho Kusaka.

After the students repeated the expression quietly, the American teacher, James Fishel, instantly encouraged them to say it louder. Kusaka then questioned how they should respond if the change was very small, followed by Fishel, in providing an answer, who simply verbalized, "Thanks."

The Japanese teacher gave another tip: "Make sure you don't use a loud voice when you, for example, receive only 10 yen. It would sound sarcastic if you did so."

At the international terminal of Tokyo's Haneda airport, only taxi drivers who have completed a mid- or higher-level English course are permitted to pick up passengers.

"This has served as an incentive for taxi drivers to take foreign language courses," said Katsumi Yasuda, director for educational affairs at the Tokyo Taxi Center, noting that visitors from abroad tended to travel a longer distance from the airport than other places in the Japanese capital.

The restriction was put in place gradually after 2014. Since then, nearly 500 have passed an English certification exam who can even have the privilege of driving their cars into a special lane that allows them to approach taxi stands with a shorter waiting time, among a total of 1,500 cabs coming to the terminal daily on average, according to Yasuda.

To take the exam designed to test communication skills, drivers must finish an advanced English course.

The center mainly provides training for people who want to be taxi drivers, but it now organizes English language courses at different levels at least twice a month for those who have already been behind the wheel.

"We have seen a spike in foreign customers and I feel that a lot of chances are out there," said Minoru Ishibashi, who attended the class. "I'm definitely going to get the certification after finishing the high-level course."

"I would be lying if I said I'm not hoping for an increase in my earnings during the Olympics," said the 65-year-old driver who had lived in the United States for six years, adding he wants to contribute to Tokyo's good image that it is "clean" and people in the city are "kind," which he has often heard over the years from foreign visitors.

In January 2018, the Japan Federation of Hire-Taxi Associations formulated a set of measures to be taken for the Olympics and Paralympics.

"We are making efforts to make sure that foreign visitors can comfortably and safely use Japanese taxis without language or payment problems as if they were in their own countries," said Takatsugu Kosuge, a managing director of the association.

Under the so-called action plan, the association set the goal of 9,000 taxi drivers receiving English lessons by April 2020, but more than 16,000 have already completed them. 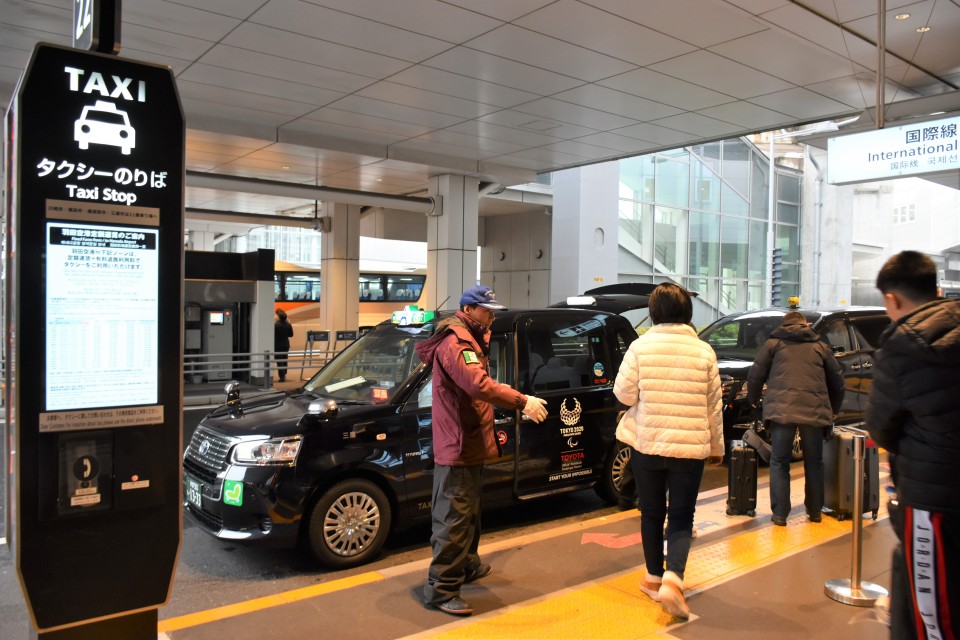 "We don't want the drivers to avoid foreigners. That's why we have been carrying out such programs on how best to treat customers," Kosuge said. "Difficult communication skills are not needed. To start with, it would be enough if they could say hello, ask where to go and say thank you."

Not just making efforts to live up to Japan's reputation for hospitality, the industry has also revamped the equipment side of its business in the months leading up to the Olympics, which will run from July 24 to Aug. 9.

On Tokyo's roads, box-shaped taxi cars, specially manufactured by Toyota Motor Corp., with Olympic and Paralympic logos plastered on each side have become part of the everyday scenery.

The deep indigo vehicles feature powered rear sliding doors and large interior space to accommodate wheelchair users and passengers with large luggage, and they have become widespread with the help of subsidies from the central and Tokyo metropolitan governments.

But it remains unclear to what extent the taxi industry will be able to reap the fruits of all its preparations.

The Tokyo metropolitan government estimated in 2017 that the economic ripple effects of the Olympics and Paralympics will be about 32 trillion yen ($292 billion) over a span of 17 years before and after the Summer Games.

The industry, which is said to have an annual revenue size of about 1.6 trillion yen, has not calculated the games' potential economic impact.

A transport ministry report released last year, based on written questionnaires and interviews collected from about 900 foreign visitors leaving from the Tokyo airport, found that 46.5 percent of them used taxis during their stays.

The report and similar surveys, however, cited that many foreigners felt fares for taxis in Japan were high and that they did not see the need for them in the first place, as a major city like Tokyo has good metro and other public transportation systems.

Moreover, as quite a few roads and expressways are planned to be restricted during the games, there could be heavy traffic, although the central and metropolitan governments have called on companies and individuals to refrain from driving their vehicles in central Tokyo and commuting during rush hours in any means of transportation.

But Tetsuro Hyodo, a transportation policy expert, thinks the likelihood of Tokyo seeing serious road congestion is not so high as a range of countermeasures to be implemented are expected to work well.

"Based on that assumption, demand for taxis is expected to fall slightly as the steps are aimed at discouraging people living in the metropolitan area from going out," said Hyodo, a professor at the Tokyo University of Marine Science.

"However, it is almost certain that there will be special demand from visitors as Tokyo's taxis can travel safely and quickly to their destinations," he said. "I also believe that taxis will be indispensable means of transportation during the Olympics and Paralympics, given that universal design taxis are increasing."