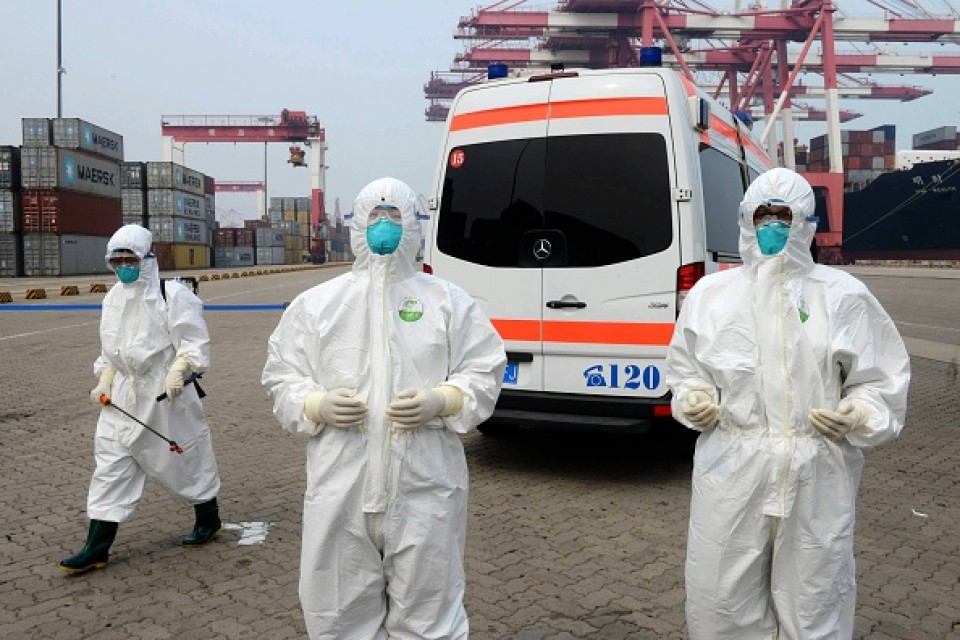 (Medical workers wait for disinfection after medical aid on "suspected case" during anti-MERS drill at Qingdao Port on June 18, 2015 in Qingdao, Shandong province of China)[VCG/Getty/Kyodo]

TOKYO - A man has tested positive in Japan's first confirmed case of infection with pneumonia caused by a new coronavirus from China, the Japanese health ministry said Thursday.

The man in his 30s, a resident of Kanagawa Prefecture, south of Tokyo, returned to Japan on Jan. 6 after traveling to Wuhan, central China where an outbreak of pneumonia associated with the new virus began in December, according to the Ministry of Health, Labor and Welfare. A government source said the man is a Chinese national.

The Japanese authorities said he possibly caught the disease from a carrier in the Chinese city and there are currently no suspected cases of secondary infection in Japan, including among his family members who live with him or doctors who have treated him.

"The chances are slim that the infection will expand (in Japan)," a health ministry official said.

The man first developed a fever on Jan. 3 while in Wuhan, and on his day of return visited a local doctor in Japan, mentioning his visit to the Chinese city. He visited another doctor last Friday since his fever did not abate and was hospitalized the same day.

After concluding from an X-ray of his lungs on Tuesday that his condition with a fever of unknown origin could possibly deteriorate, the hospital notified the health ministry later that day.

His infection was confirmed Wednesday by the National Institute of Infectious Diseases after two laboratory tests, where the first one showed negative.

The man was discharged Wednesday and is now at home recuperating, with no fever but a slight cough, the ministry said.

The man passed the quarantine test at the airport upon his return because he had taken some fever medicine.

While the Japanese government declined to reveal the name of the airport, transport minister Kazuyoshi Akaba said his ministry will "do everything it can" to detect possible patients at airports and seaports.

The pneumonia caused by the virus, which the World Health Organization recognized Tuesday as a novel coronavirus, has infected 41 people in Wuhan, with preliminary evidence suggesting the outbreak was associated with exposure in a seafood market as many among them worked or were customers there.

The Chinese resident in Japan has told the Japanese health authorities that he did not visit the seafood market, making it likely that he had close contact with a carrier.

The Chinese city's public health authorities have said they are investigating a case of an outbreak within a family over the possibility that the virus could be transmitted among humans.

A Japanese health ministry official said the virus might be transmitted among humans if a person spends a long time with a carrier in proximity.

One person among the 41 infected has died but the WHO said on its website Sunday that the patient had "other underlying health conditions."

Thailand's Public Health Ministry reported Monday that a 61-year-old Chinese tourist from the city was confirmed to have the viral pneumonia.

MERS, which is thought to spread from camels, was first reported in Saudi Arabia in 2012.

These syndromes were ruled out as the cause of the outbreak in Wuhan.

Japan's health ministry has called for people to wash their hands, gargle, and wear masks as a preventative measure as influenza and colds are common in this period.

It has also said that nationals who have visited Wuhan should wear masks and get a medical checkup as soon as possible if they find themselves with a fever or cough, and tell medical institutions that they have returned from the city.