The Japanese government prevented a Chinese corporation from getting operating rights at a port in El Salvador to be built with a concessional loan from Tokyo, diplomatic sources said Monday.

The government warned of withdrawing its plan to provide 11.2 billion yen ($102 million) in official development assistance after Washington took issue with the Chinese company's interest in the project and pressured the El Salvadoran government into suspending a tender, Japanese and U.S. diplomatic sources said. 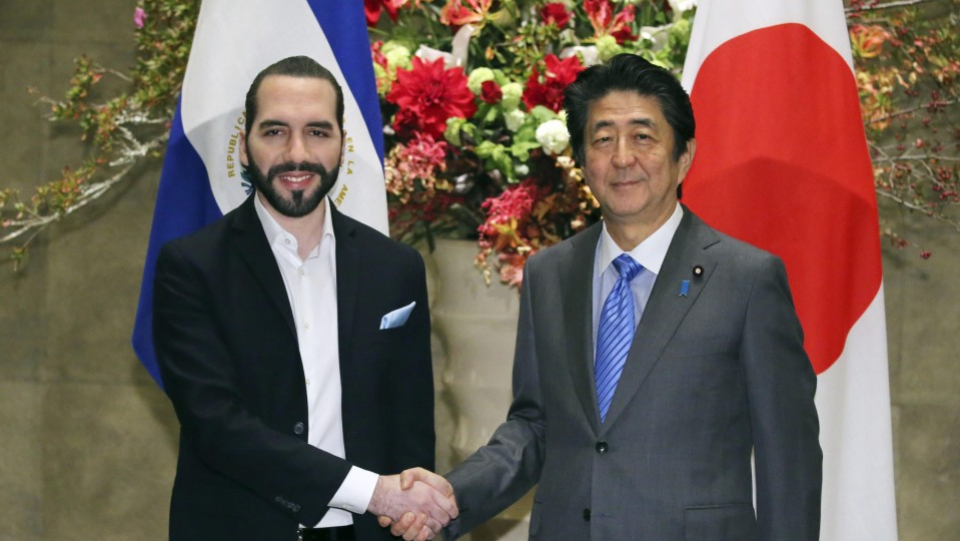 (Abe, right, and Bukele in November)

As part of its "One Belt, One Road" project, China has port rights in some countries, worrying Japan and the United States about possible military implications.

"Beijing is looking to make inroads into Latin America, which the United States considers its backyard," a Japanese Foreign Ministry official said.

Several companies including the Chinese firm had indicated interest in the western El Salvador port project when Japanese officials briefed potential bidders in October 2018, shortly after the Latin American republic had severed diplomatic relations with Taiwan -- a U.S. ally -- to establish ties with China.

Coordinating with Washington, Tokyo told El Salvador that the contract must be one that satisfies Japan, the sources said.

In their meeting in November, Abe cautioned Bukele that numerous developing countries are saddled with large financial debts owed to Beijing.

Bukele responded that El Salvador would not allow China to get involved in running important infrastructure, the sources said.

Abe eager to invite Xi as state guest despite some opposition