China may seek to drop India from a mega free trade agreement with mainly Asian nations if ongoing negotiations of the Regional Comprehensive Economic Partnership including the two most populous countries remain at a standstill, observers say.

China has recently been keen to bolster economic cooperation with its neighbors such as Japan and South Korea, with its exports -- a key driver of economic growth -- shrinking against the backdrop of a tit-for-tat trade dispute with the United States. 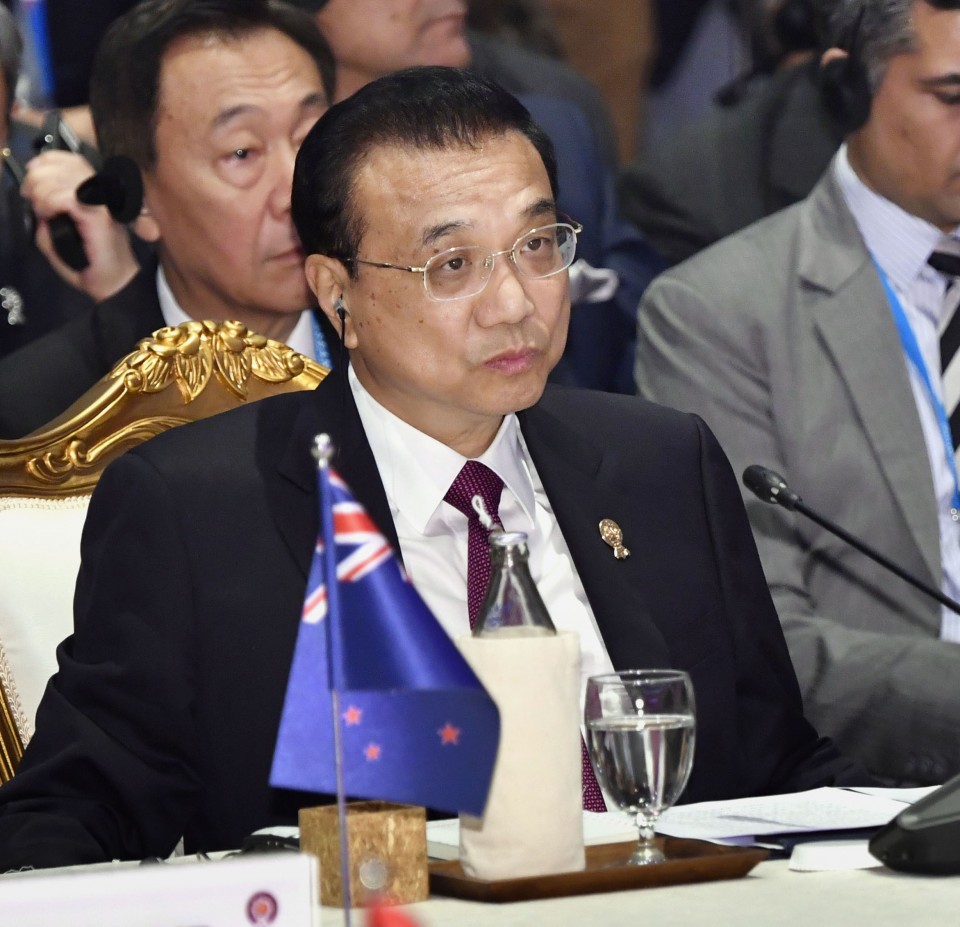 But the outlook for the 16-member RCEP negotiations is very uncertain, as India, which has a population of more than 1.3 billion, has been reluctant to lower its trade barriers, saying it has suffered massive trade deficits with China for many years.

With New Delhi warning that it will pull out of RCEP negotiations, Beijing is likely to aim to accelerate free trade talks with 15 Asia-Pacific countries without India, sources close to the matter said.

Accounting for half of the world's population, RCEP brings together Australia, China, India, Japan, South Korea and New Zealand, as well as the 10 Association of Southeast Asian Nations. Originally proposed by ASEAN leaders in 2012, it would be the world's largest free trade zone once realized.

"China has put emphasis on wrapping up the RCEP negotiations, but the country's top priority appears to be concluding a free trade agreement with Japan and South Korea," a diplomatic source in Beijing told Kyodo News.

In a joint statement released after the RCEP summit on Monday in Thailand, leaders from the 16 Asia-Pacific nations effectively declared their intent to give up on achieving the goal of finalizing their free trade deal by the end of this year.

Instead, the leaders pledged to sign the agreement in 2020, but some RCEP officials have indicated that talks will not go smoothly given India's cautious stance on opening up its economy. India still has concerns in key areas such as tariffs and market access.

Indian foreign ministry official Vijay Thakur Singh said at a press conference on Monday, "India conveyed its decision at the summit not to join the RCEP agreement."

Indian Prime Minister Narendra Modi "highlighted that he was guided by the impact (that RCEP) would have on the lives and livelihoods of Indians, especially vulnerable sections of society," she said, adding, "We took the right decision in the national interest."

At their one-on-one meeting last month, Modi and Chinese President Xi Jinping reaffirmed the importance of multilateral trade and agreed to work toward reducing India's trade deficit with China.

"India, however, has not become optimistic about the trade issue with China. And China is prepared to pave the way for a free trade deal with major Asian countries excluding India," the diplomatic source said. "For China, India is a headache."

In fact, China sounded out some Asia-Pacific nations on beginning talks to create a free trade zone without India earlier this year, a RCEP source said.

In light of the difficulties in concluding the RCEP, China was interested in building a free trade area based on the framework of the "East Asia Economic Caucus," a free trade bloc proposed by Malaysian Prime Minister Mahathir Mohamad in the 1990s.

The EAEC, an East Asian-only alternative to the U.S.-led Asia-Pacific Economic Cooperation forum, is regarded as the forerunner of the "ASEAN plus three" (China Japan, South Korea) forum that excludes RCEP members India, Australia and New Zealand.

So far, China has promoted RCEP negotiations to shore up its exports, as the world's second-biggest economy has continued to record slower growth.

In particular, its exports to the United States -- the world's largest market -- plunged 10.7 percent from the previous year for the nine months from January, with little sign of trade tensions between Beijing and Washington easing soon.

"China has been eager to join a mega free trade zone. China apparently believed that if free trade talks move forward within the EAEC framework, it would take the initiative as it has economic influence in the region," the RCEP source said.

Tokyo has opposed Beijing's proposal to exclude India, a Japanese government official said, adding it is "meaningless" to establish a free trade area without the South Asian nation in an attempt to counter rising protectionism across the globe.

If India leaves RCEP, "We will also withdraw," the Japanese official said.

Nevertheless, the official expressed concern that some RCEP countries close to China, like Cambodia and Laos, are expected to fall in line with Beijing.

Malaysia may also agree with China, as Mahathir has said that RCEP participants would have to consider which framework would be the best -- Beijing's suggested 13-nation free trade pact or the original 16-country deal.

"We are still worried about whether RCEP will be threatened by China and a few ASEAN nations," the Japanese official said.