At the summit on the outskirts of Bangkok, Abe also urged the leaders of countries in ASEAN-plus-three -- China, South Korea, the Association of Southeast Asian Nations and Japan -- to fully implement U.N. sanctions on Pyongyang to achieve denuclearization of the Korean Peninsula, the Japanese government said.

Abe told the leaders that he is eager to meet with North Korean leader Kim Jong Un "without conditions" to make a breakthrough over the issue of Pyongyang's abductions of Japanese nationals in the 1970s and 1980s, according to the government.

In recent months, North Korea has continued to test-fire weapons considered to be short-range ballistic missiles.

On Oct. 5, North Korea resumed working-level dialogue with the United States on denuclearization in Stockholm after months of stalemate, but the talks ended without progress.

North Korea has warned it may restart nuclear and intercontinental ballistic missile tests unless negotiations with the United States move forward by the end of this year. 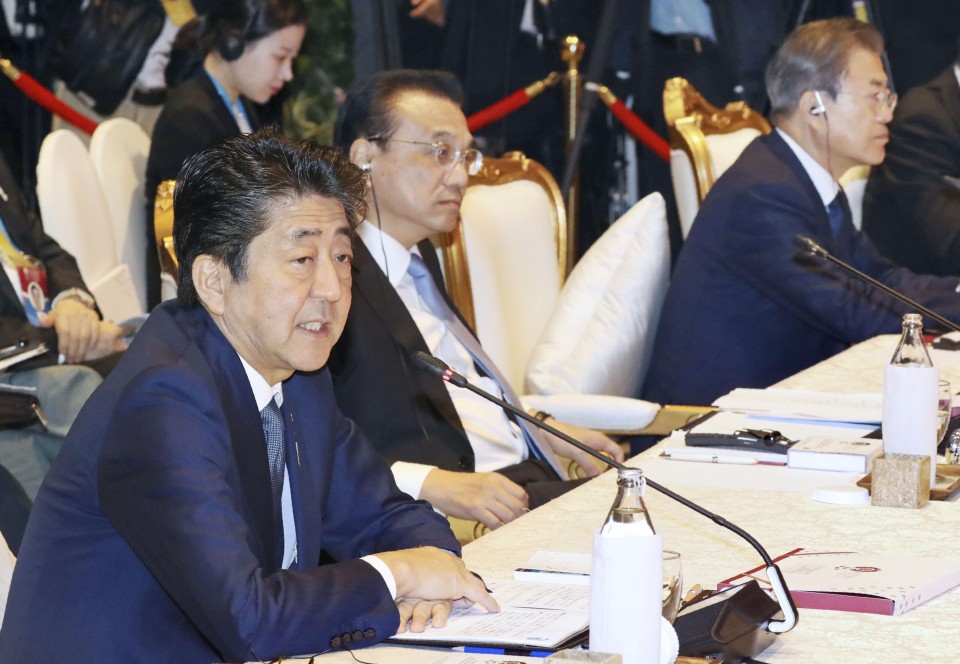 Ahead of Monday's summit, meanwhile, Abe held brief talks with South Korean President Moon Jae In, with ties between the two Asian countries remaining frayed by a dispute over wartime compensation and trade.

Tensions between the neighbors have escalated since late last year when South Korea's top court ordered a Japanese company to pay compensation for forced labor during Japan's 1910-1945 colonial rule of the Korean Peninsula.

Seoul said Abe and Moon agreed on the need to resolve outstanding bilateral issues through dialogue.

ASEAN groups Brunei, Cambodia, Indonesia, Laos, Malaysia, Myanmar, the Philippines, Singapore, Thailand and Vietnam. All the members have diplomatic relations with North Korea, although Japan does not.

China plans to hold summit with Japan, S. Korea in Dec. in Chengdu

Japanese views on China remain negative despite thaw in ties