Yasuhiro Nakasone, a former Japanese prime minister with his Cold War-era tenure best characterized by his close bond with U.S. President Ronald Reagan and pursuit of a robust bilateral alliance, died Friday, the ruling Liberal Democratic Party said. He was 101.

Nakasone, in office between 1982 and 1987, witnessed Japan's rise as an economic power and trade friction with the United States while enjoying the "Ron-Yasu" friendship. Siding with British Prime Minister Margaret Thatcher, he aimed to raise the country's presence as a member of the West that confronted the former Soviet Union.

At home, Nakasone sought to "finalize the settlement of postwar politics," pushing for administrative and fiscal reform in support of a smaller government. He led efforts to privatize key state-owned enterprises, including Japan National Railways.

Prime Minister Shinzo Abe described Nakasone as someone who navigated the nation at a critical juncture in postwar Japan. "I cannot help but feel deeply sad," he said in a statement. 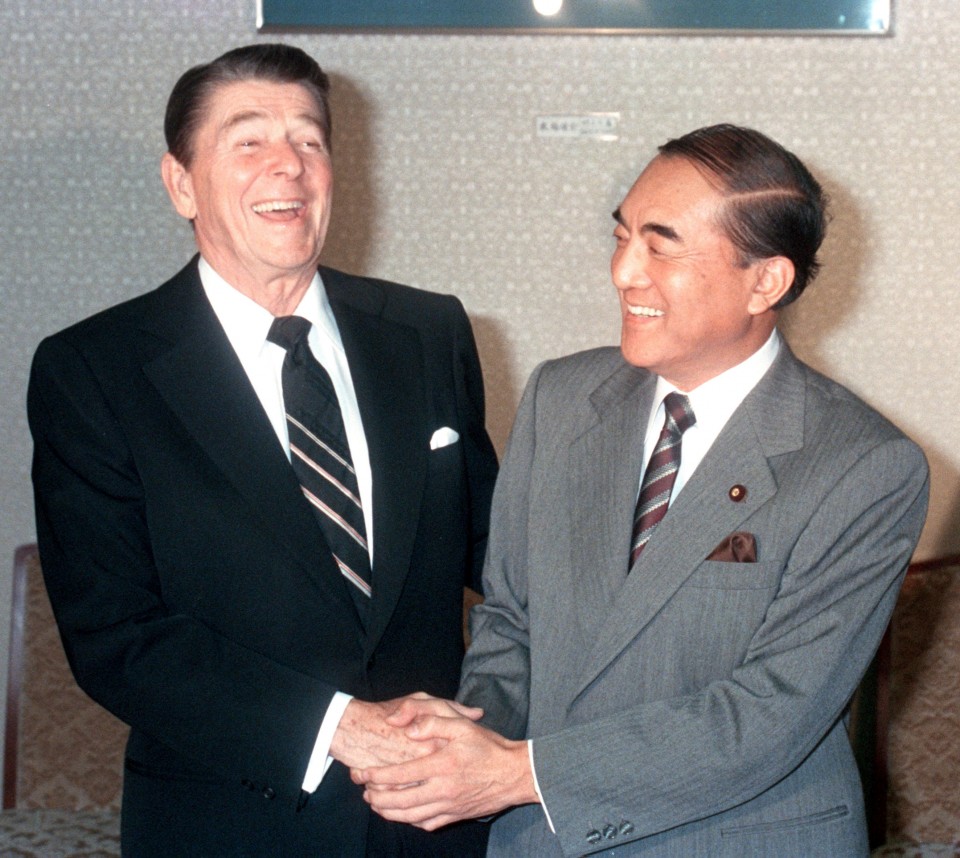 In the 1,806 days in office -- the fifth-longest in postwar Japan -- and beyond, Nakasone, who died at 7:22 a.m. at a Tokyo hospital, was an ardent supporter of amending the postwar Constitution, a goal shared by Abe.

Nakasone aspired to beef up the country's defenses by eliminating its cap on defense spending, which had been kept within 1 percent of gross national product.

Shortly after becoming prime minister, Nakasone made the first official visit as Japanese premier to South Korea in January 1983, helping improve ties between Seoul and its former colonial ruler.

In 1985, the conservative lawmaker made history by visiting Yasukuni shrine for the first time as Japanese prime minister on the Aug. 15 anniversary of Japan's surrender in World War II, outraging China.

The Shinto shrine in Tokyo is still a source of diplomatic friction decades later with China and South Korea, which suffered from Japanese wartime aggression, as they view it as a symbol of Japan's past militarism. 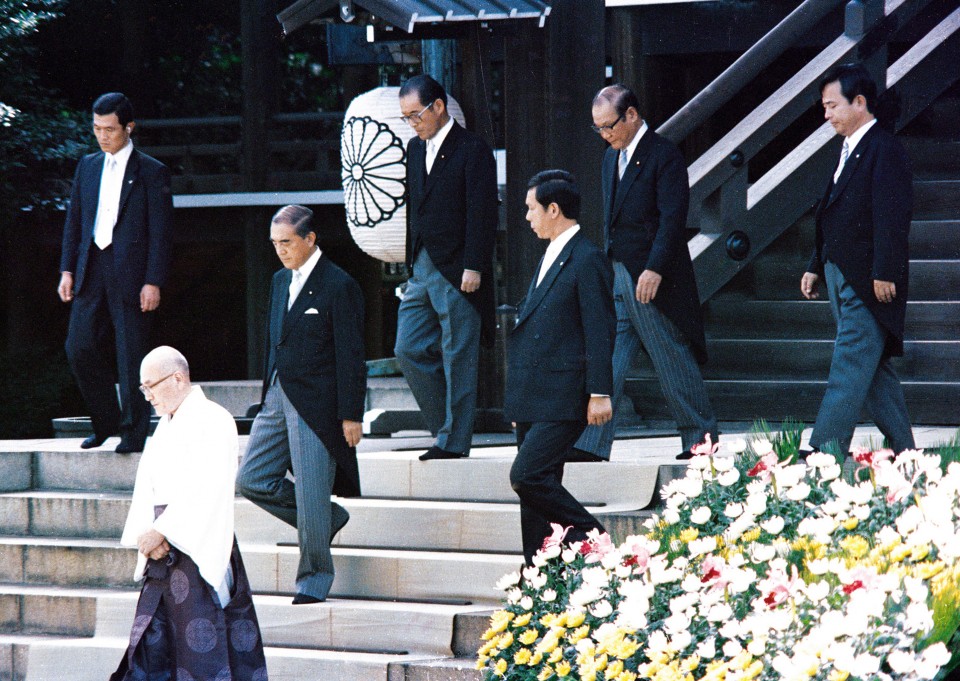 Nakasone, a political hawk, also caused a stir with his remarks that Japan should be like an "unsinkable aircraft carrier" for the United States in defending against Soviet Backfire bombers and controlling strategic straits to block the passage of Soviet ships.

He also suggested at an LDP seminar in 1986 that blacks and Hispanics were responsible for lowering the average intelligence level in the United States.

On the economic front, the Nakasone administration allowed the Japanese yen to appreciate against the U.S. dollar under the 1985 Plaza Accord.

The pact was reached among Britain, France, then-West Germany, Japan and the United States to weaken the dollar relative to other major currencies through coordinated intervention.

But the yen's sharp rise plagued the export-reliant Japanese economy, prompting monetary easing by the Bank of Japan that led to an asset-inflated bubble in the economy in the latter half of the 1980s before its burst in the early 1990s.

Born in Takasaki, Gunma Prefecture, on May 27, 1918, Nakasone graduated from Tokyo Imperial University, the precursor of the University of Tokyo, and worked for the home affairs ministry and later the Imperial Japanese Navy.

He joined the LDP in 1955, when it was created through a merger between the Liberal Party and the Democratic Party. He won his first Cabinet post as director general of the former Science and Technology Agency in 1959.

After serving as minister of transport, head of the then Defense Agency, minister of international trade and industry, and LDP secretary general, he succeeded Zenko Suzuki as the 71st prime minister.

First elected to the House of Representatives in 1947, he served 20 terms in the chamber, mostly as a member of the long-governing LDP until he retired from politics in 2003.

His retirement came in response to a request from then Prime Minister Junichiro Koizumi, who said any LDP lawmaker aged 73 or older should not be endorsed as a party candidate in elections. Nakasone was in his 80s at the time.

Even after his retirement, Nakasone continued to work on his lifelong mission of seeking changes to the U.S.-drafted Constitution.

Nakasone was awarded the Grand Cordon of the Supreme Order of the Chrysanthemum, one of the nation's highest decorations, in 1997.

May 27, 1918 -- Born in Takasaki, Gunma Prefecture. Later graduates from Tokyo Imperial University, now the University of Tokyo, and works for the home affairs ministry before serving in the Imperial Japanese Navy during World War II.

June 1959 -- Obtains his first Cabinet post as chief of the now-defunct Science and Technology Agency under Prime Minister Nobusuke Kishi.

December 1966 -- Launches his own political faction in the LDP.

January 1983 -- Becomes the first Japanese premier to make an official visit to South Korea. Travels to the United States a few days later, reaffirming bonds with U.S. President Ronald Reagan as "Ron-Yasu" relationship. Faces criticism after saying Japan should be like an "unsinkable aircraft carrier" in defending against the Soviet Union.

December -- The LDP loses majority in the lower house election.

January 1985 -- Vows to "finalize the settlement of postwar politics" in a policy speech to spearhead reforms.

Aug. 15 -- Makes official visit to the war-linked Yasukuni shrine in Tokyo as the first postwar Japanese prime minister to do so on the 40th anniversary of Japan's surrender in World War II.

July 1986 -- Clinches landslide victory for the LDP in double elections of the lower chamber and the House of Councilors.

December -- The Nakasone Cabinet decides to break away from policy of limiting the defense budget under 1 percent of the gross national product.

November -- Steps down as prime minister.

May 1989 -- Quits the LDP to take political responsibility for the Recruit shares-for-favors scandal that implicated numerous politicians. Returns to the party in April 1991.

April 1997 -- Awarded the Grand Cordon of the Supreme Order of the Chrysanthemum, one of the country's highest decorations.

October 2003 -- Retires from politics as requested by then Prime Minister Junichiro Koizumi. 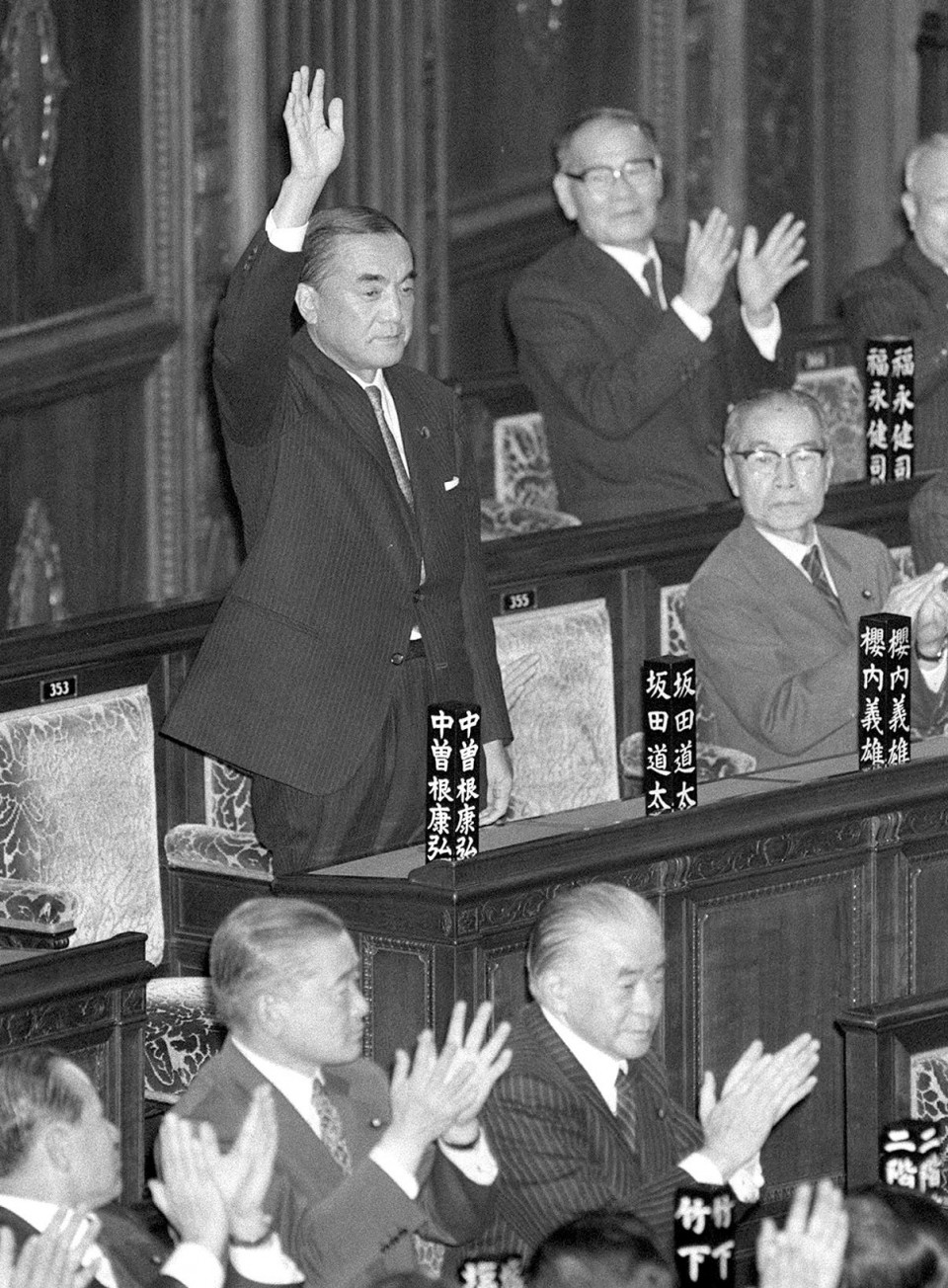 (November 1982: Nakasone raises his hand as he is named prime minister at a House of Representatives plenary session) 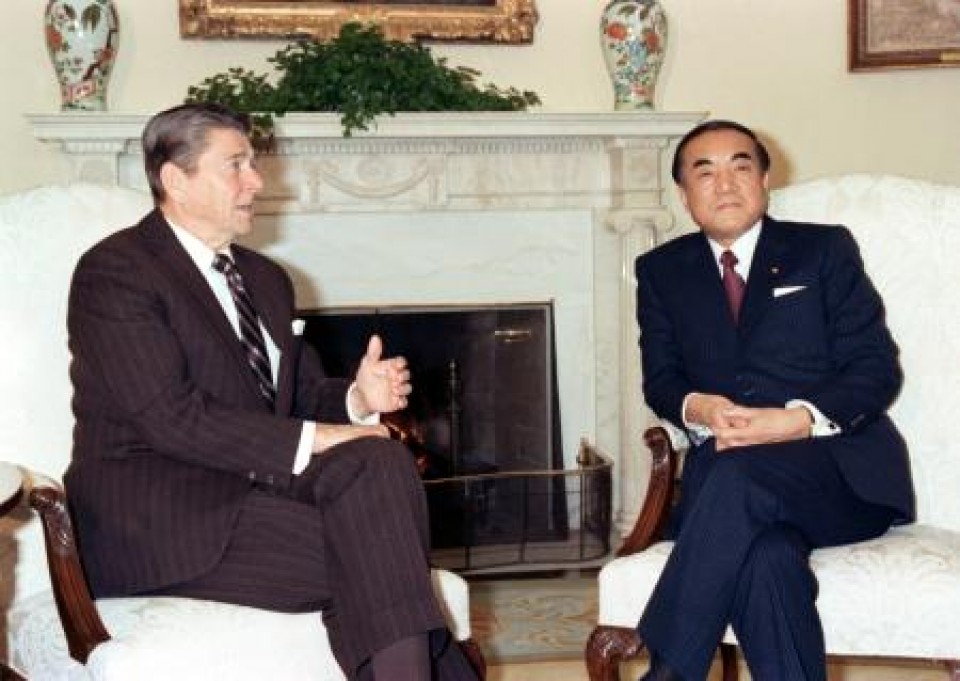 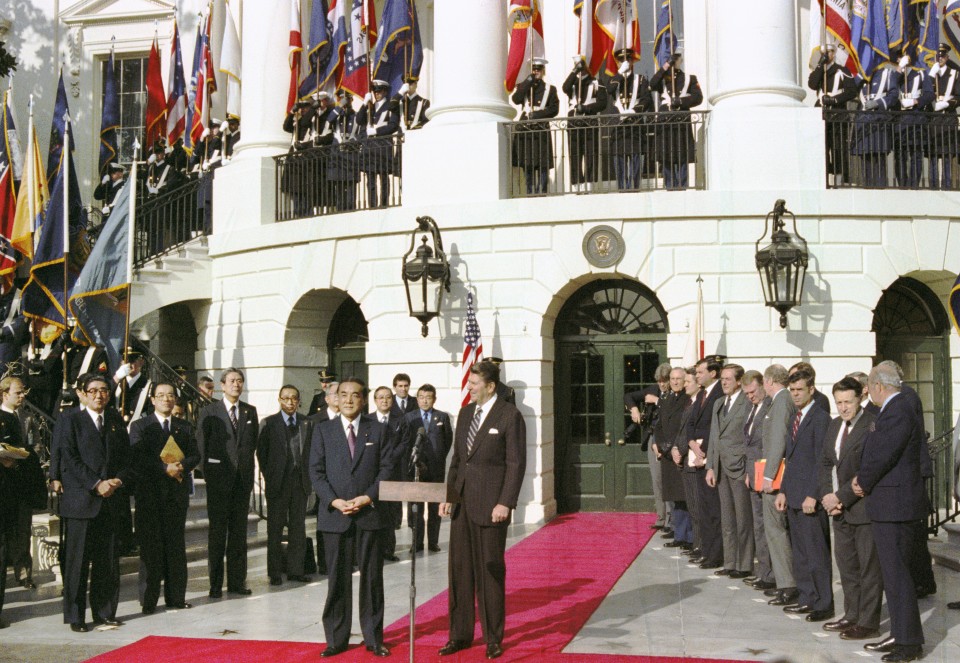 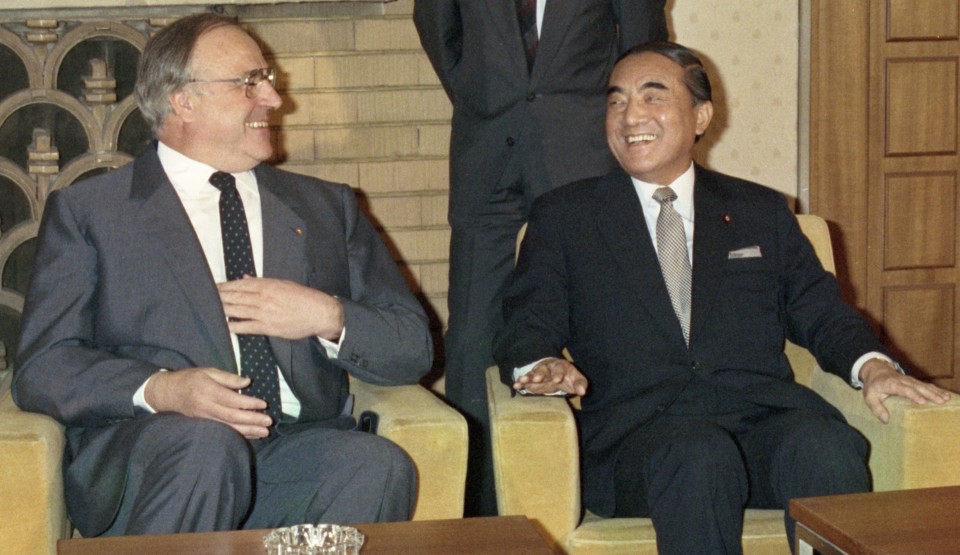 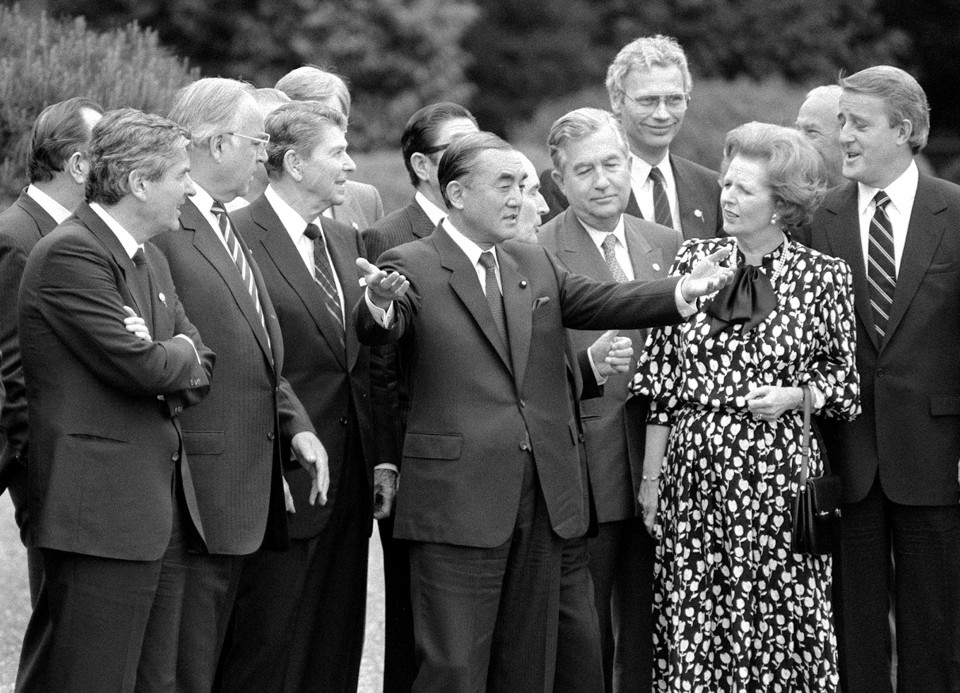 (May 1986: Nakasone, 4th from left, chats with other Group of Seven leaders in Tokyo) 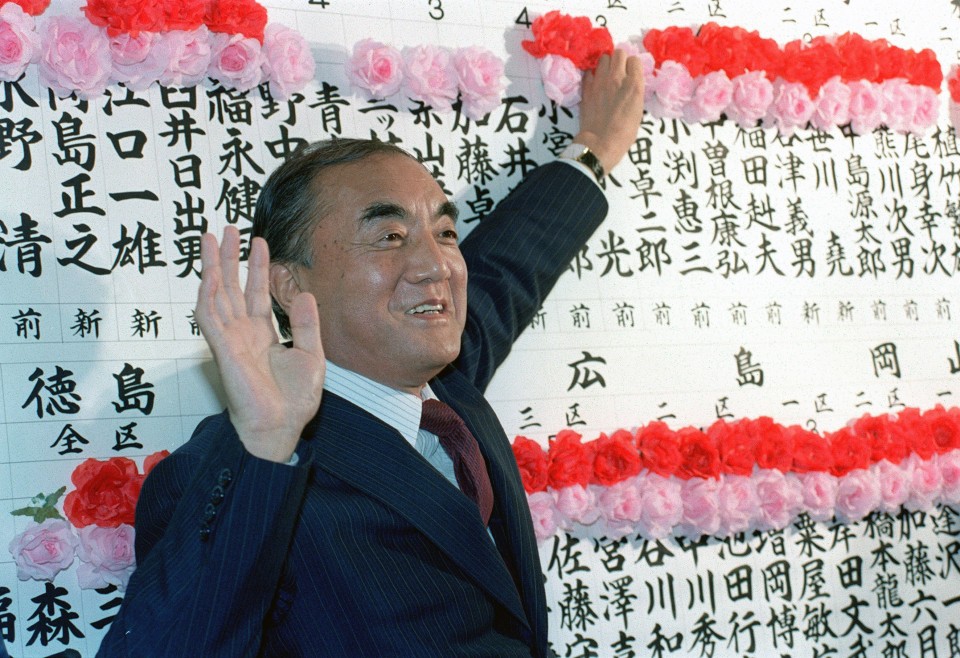 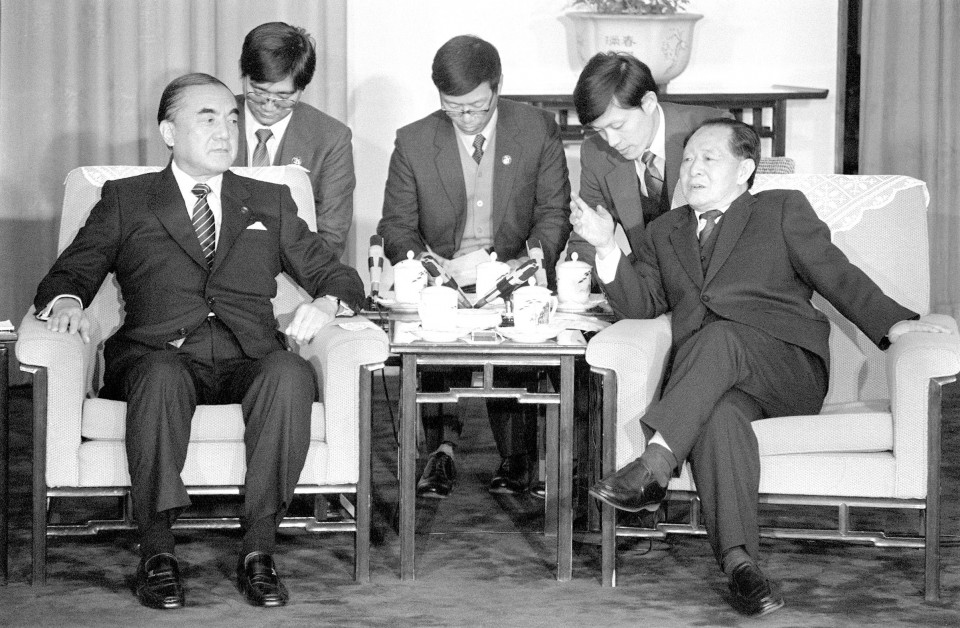 (November 1986: Nakasone, left, and Hu Yaobang, general secretary of the Chinese Communist Party, hold talks at the Great Hall of The People in Beijing) 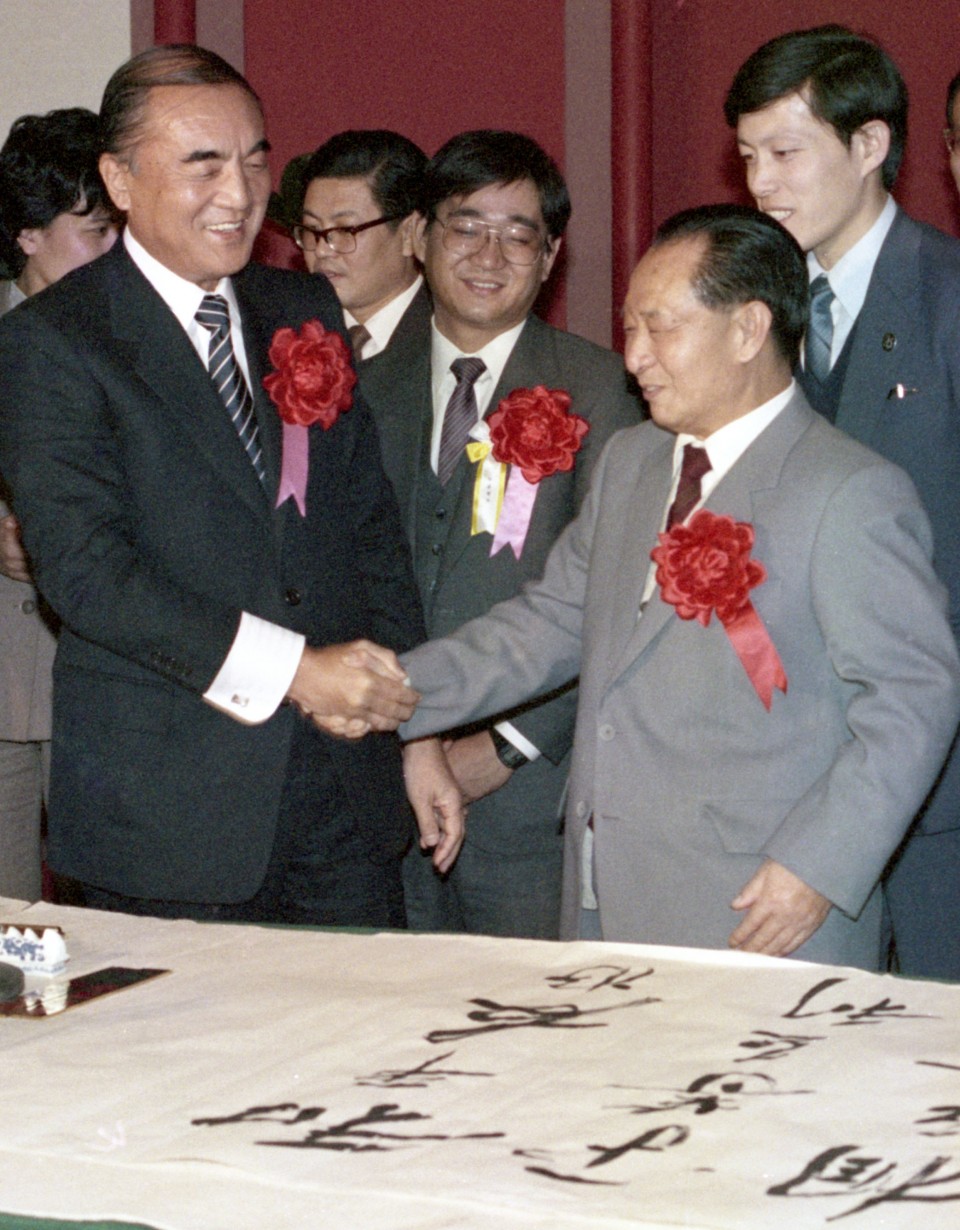 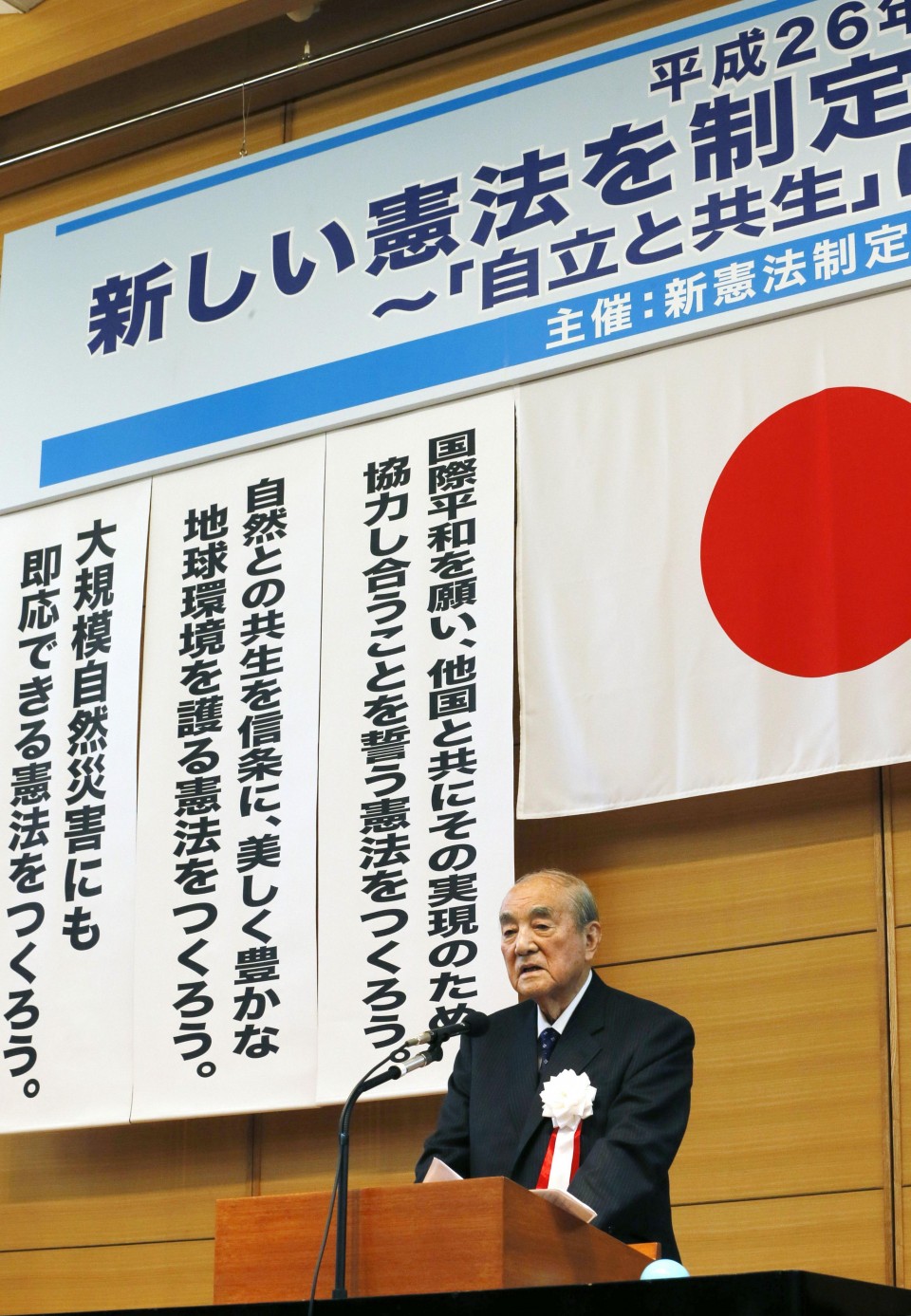 (May 2014: Nakasone addresses a parliamentarians' gathering calling for a revision to the nation's Constitution) 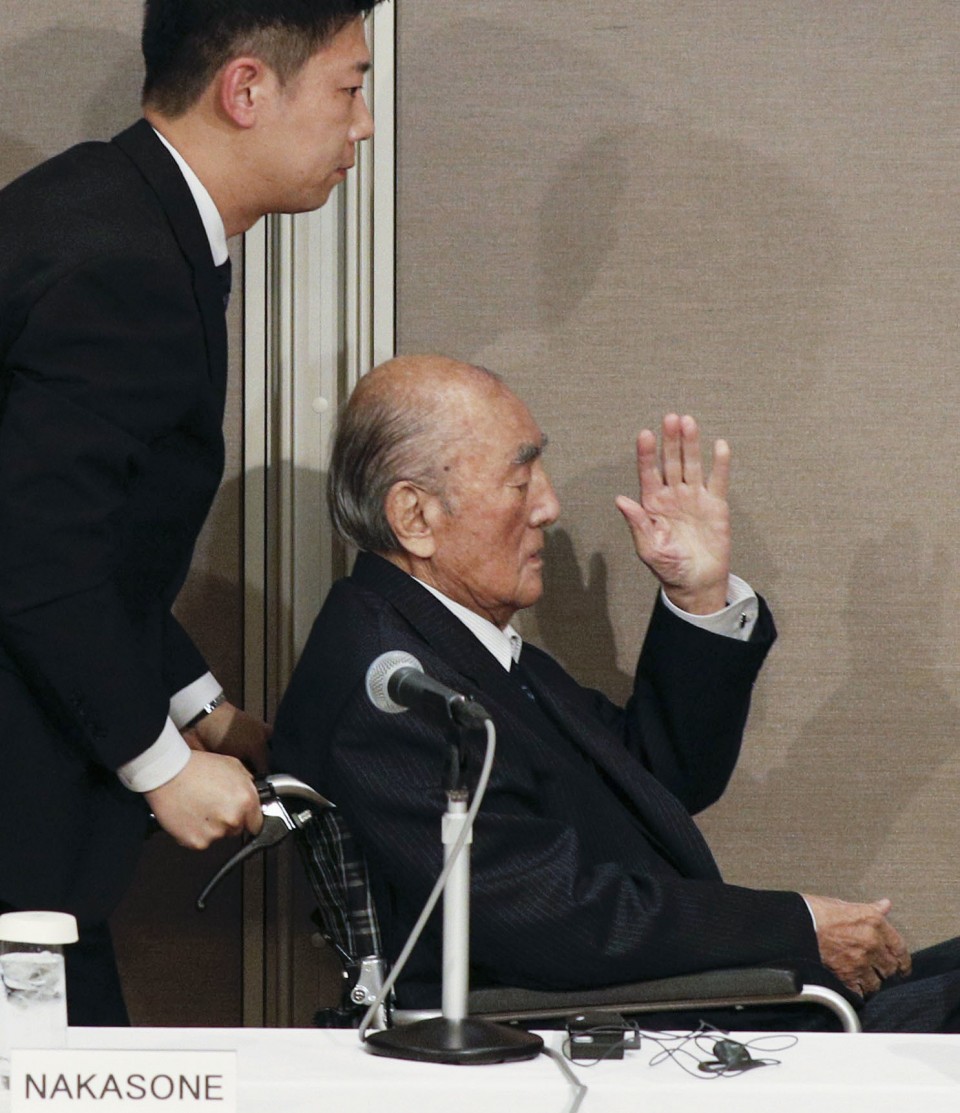 (June 2018: Nakasone attends a press conference in Tokyo after turning 100 the previous month)