A ceremony was held Friday to mark one year since the opening of a new fish market in Tokyo's Toyosu waterfront district, which replaced the 83-year-old Tsukiji market, a popular tourist attraction.

The capital's iconic wholesale market, famous for tuna auctions, was relocated over concerns about sanitation, earthquake resistance and fire safety at the aging facility.

"Amid a changing logistical and commercial environment, wholesale markets will play an even more crucial role," Tokyo Gov. Yuriko Koike said at the ceremony. "We'd like to develop this site further as Japan's core market and a new location to transmit food culture."

The transfer of the market was delayed by about two years as additional safety work was conducted to address concerns over soil and groundwater contamination at the Toyosu site, which was formerly a gas plant.

Designed to be the new "kitchen of Japan," the market occupying a 40-hectare site is 1.7 times larger than Tsukiji and equipped with an enhanced sanitary management system, including enclosed facilities to regulate internal temperatures.

Its improved functions have helped increase transactions with countries that have strict quality controls such as Australia. 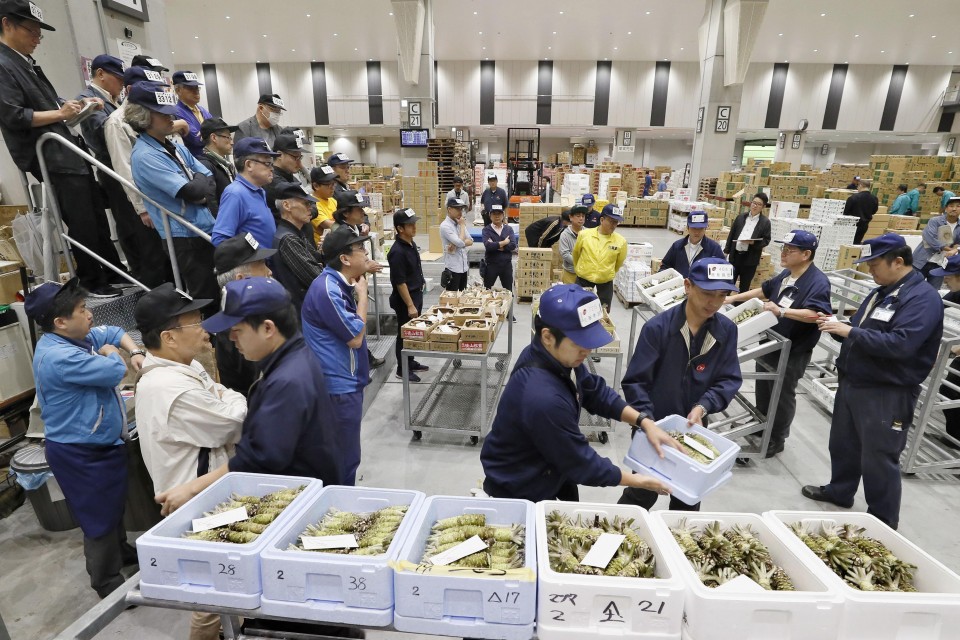 However, the overall volume of fishery products handled at the Toyosu market has declined compared with the level before the relocation, affected by Japan's population decline, changes in domestic consumers' tastes and reduced fish catches.

In the 10 months between November last year and August, the volume handled at the Toyosu market stood at 289,000 tons, down 6 percent from the level at the Tsukiji market during the same period the previous year.

Another challenge for the Toyosu market is how to improve its appeal for tourists.

Tsukiji was popular with visitors as it allowed them to see tuna auctions up close and feel the hustle and bustle of the market.

At the Toyosu site, concerns over sanitation and safety have relegated the tourists to a spot behind glass on a deck 3 meters above ground to observe the auctions.

Furthermore, commuter access has become more difficult with only one station serving the area on the Yurikamome train line in Tokyo's bay area.

Workers at the market have asked the Tokyo metropolitan government to improve the site's access by increasing the number of bus services and opening a subway station.

The 23-hectare former Tsukiji market site on reclaimed land in the heart of the capital will be temporarily used to pool transport vehicles for the 2020 Tokyo Olympics and Paralympics.

An expressway extension will also run through the site to improve access from central Tokyo to the bay area, where some Olympic facilities will be located.

After the games, the Tokyo metropolitan government, which owns the land, will work with private companies to build a complex comprising an international convention center, luxury hotels, a research and development facility, and restaurants by the 2040s.