In a world where stats abound, it's somewhat ironic that the favorite saying of one of the major reasons for Japan's success on the international rugby field in recent years is "It's only a number, mate."

Luke Thompson confirmed after last Sunday's Rugby World Cup quarterfinal against South Africa that he was retiring from the international stage, having represented Japan 71 times.

"I'm just really tired," he said at the post-tournament press conference when asked how it felt to hang up his test-match boots.

It was not the first time the lock had made such an announcement, having initially said his time in the red and white was done after the 2015 World Cup.

"Four years ago I really meant it," he said, only to return to national colors in 2017 to help out with an injury crisis, a game that was supposed to be a one-off affair.

Though as he reminded the media after that match against Ireland, "Never say never."

But while watching Japan play Italy on TV a year later, "My wife saw how animated I was and asked 'Do you still want to do it?' And I thought to myself, 'Maybe.' Thought about it more and realized I did."

Following a phone call with Japan assistant coach Tony Brown -- in his role as Sunwolves head coach -- and with wife Nerissa's support, Thompson joined up with Japan's Super Rugby franchise and made his debut against the Sharks in Singapore.

When reminded then that -- at 37 years and 306 days -- he was the oldest player to make his debut in Super Rugby, Thompson simply laughed and said, "Age is just a number."

Thompson arrived in Japan 15 years ago and was initially based in Ota, Gunma Prefecture.

However, after two years with Sanyo (now Panasonic) Wild Knights, he moved down to Osaka to join Kintetsu Liners, made his international debut against Hong Kong in April 2007, and became a Japanese citizen four years later.

He retires with 71 caps, nine test tries, a Japan record 14 Rugby World Cup matches and hundreds upon hundreds of tackles to his name.

Numbers, however, as Thompson points out, are often just that. And in this case they do no real justice to the impact he has had on the team since he made his international debut all those years ago.

When asked in February what he would bring to the Sunwolves, he answered with a Japanese term -- "Doryoku," he said, using a word meaning endeavor, ability and effort. "And hopefully a calming influence."

His teammates and coaches, however, have a few more words.

"He is so fit and tough for his age," said 33-year-old hooker Shota Horie. "I would love to be like him in four years' time, but I'm not sure I can be. I really respect him."

Kazuki Himeno has been tipped by many as a future Japan captain, and the 25-year-old back-row forward said Thompson was a player the whole squad looked up to.

"He is very experienced and very seasoned," he said. "If something goes wrong then his presence alone shines through. And when we see him making so much effort at training and in the games, then we also have to."

Japan coach Jamie Joseph has often referred to Thompson as world class and an inspiration to his teammates. 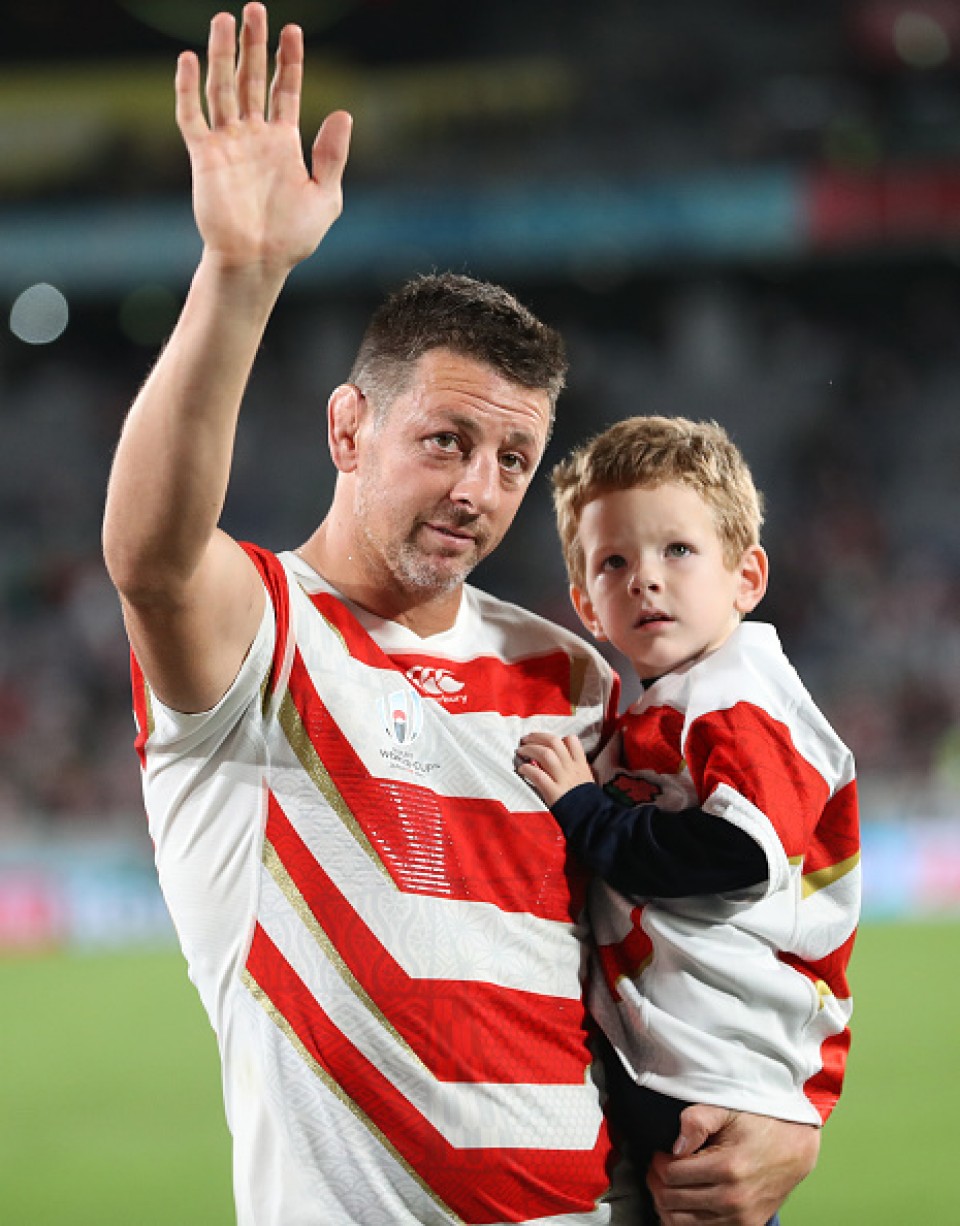 (Luke Thompson of Japan waves to the crowd after the Rugby World Cup 2019 Quarter Final match between Japan and South Africa at the Tokyo Stadium on October 20, 2019 in Chofu, Tokyo.)[Getty/Kyodo]

But perhaps the most telling comment comes from Brown, a man whose own playing career -- and at one stage, life -- was almost ended by a hard but fair tackle from Thompson that ruptured his pancreas, in a Top League game in 2009.

"When Luke first came here he was a country boy from Canterbury," the former All Black said. "He is a tough guy who wants to perform well every week and trains hard. It's so important having people at a World Cup who are so tough mentally."

For his part, Thompson said he will remember all the friends he made and all the memories that he will take home to New Zealand in January, following the completion of his final season with Kintetsu.

"I said zettai (absolutely) before too. But now I'm 38, I'm absolutely sure I'm done," he said after the South Africa game, when asked if this really was the end of his international career.

"I think I wouldn't believe all this a year ago. To play for the national team in the World Cup quarterfinals against South Africa, I wouldn't have believed it. I'm really thankful to my teammates and coaching staff for this chance."

A few days earlier, when asked if he had imagined all those years ago whether he could have imagined playing in a fourth World Cup, Thompson replied, "I didn't even think I would be playing rugby at 38, let alone at a World Cup."

The huge cheers that greeted his name whenever the Japan team was announced proved that not only did the nation treat Thompson as one of their own, but they were really thankful he had listened to his wife, so he could have one last hurrah in front of his adoring home fans.