Is escalator etiquette in Japan about to change?

The established custom of standing to one side and keeping the other side open for people in a hurry is being called into question by those who want to make moving stairways safer. 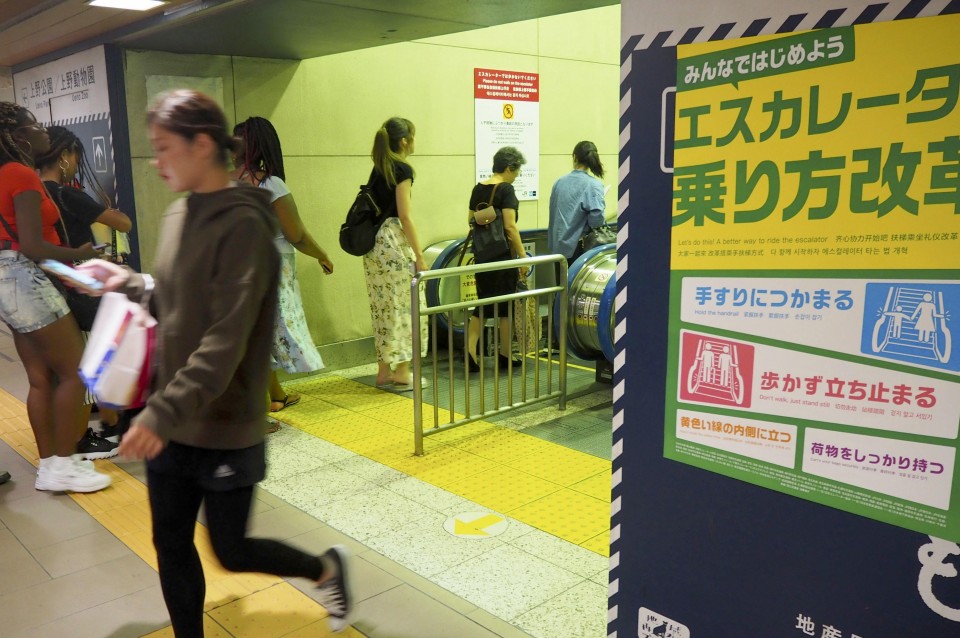 As next year's Tokyo Olympics and Paralympics approach, a campaign spearheaded by the Tokyo Physical Therapy Association is gaining traction to get users to stay put amid a spate of accidents involving escalators and concerns raised by persons with disabilities that they feel unsafe using them.

Many advocates of the change argue that escalators were never designed for walking up and down.

But the convention, said to have taken root in the 1970s in Osaka before spreading nationwide, is that passengers should stand to one side to allow those in a rush to pass them by -- although whether to stand to the right (Osaka) or the left (Tokyo) depends on where you are.

Akio Hinuma, 65, of Tokyo's Nerima Ward, suffered a stroke at work that left him partially paralyzed. He is unable to grasp the handrail with his left hand so flouts Tokyo convention by standing to the right when he uses an escalator. 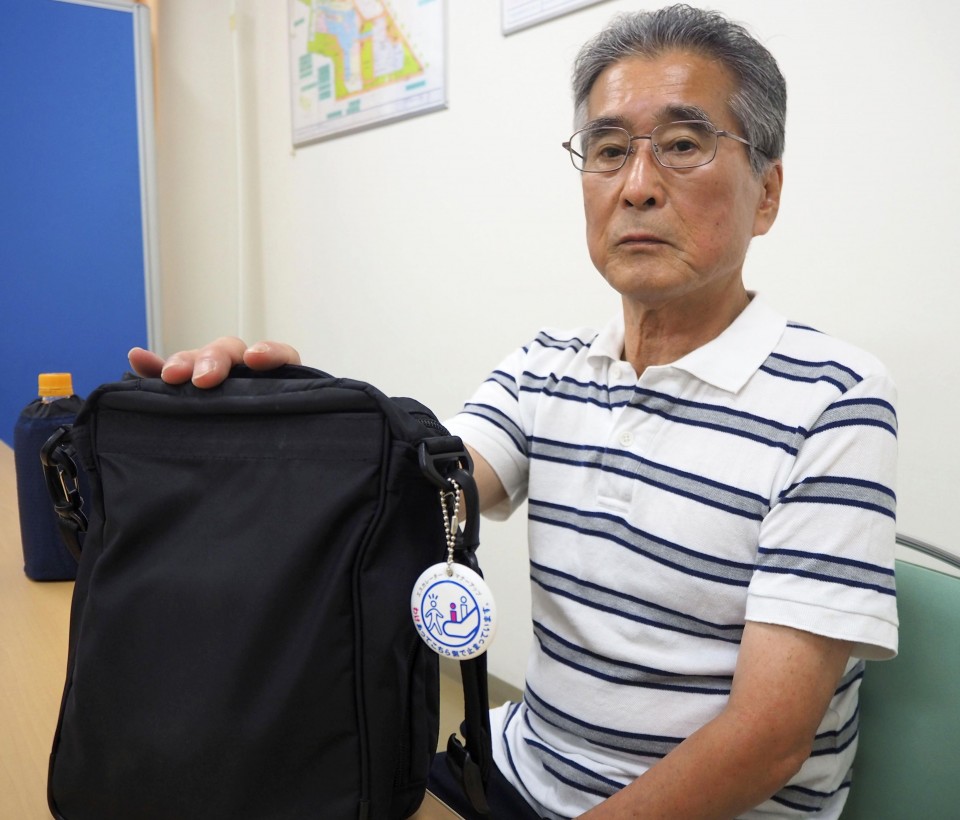 So far, he has not experienced any trouble from other escalator users, in part thanks to a badge on his shoulder bag that reads: "I am standing on this side for a reason."

The badge was created by the physical therapy association last year, and some 5,000 had been distributed free of charge by the end of August this year.

The association has begun conducting workshops on escalator etiquette, hoping to end walking on moving stairways ahead of the Tokyo Olympics and Paralympic Games, when visitors will pour into the capital.

"In the context of an increasingly diverse and inclusive society, we want people to realize there are those who prefer to stand when riding escalators and want this consideration to spread," said Hiroshi Saito, 40, in charge of the association's committee for promoting escalator etiquette.

According to Masaki Hashii, 68, of the Japan Federation of the Blind, visually impaired escalator users accompanied by a guide dog or helper sometimes have people push past them or click their tongues in disapproval for having their way blocked.

"We understand that people might want to rush, but we hope they can be more patient," Hashii said.

According to data released by the Tokyo Fire Department, around 1,400 people per year were taken to hospital from 2012 to 2016, more than 60 percent of whom were aged 65 and over in 2016, due to escalator accidents. 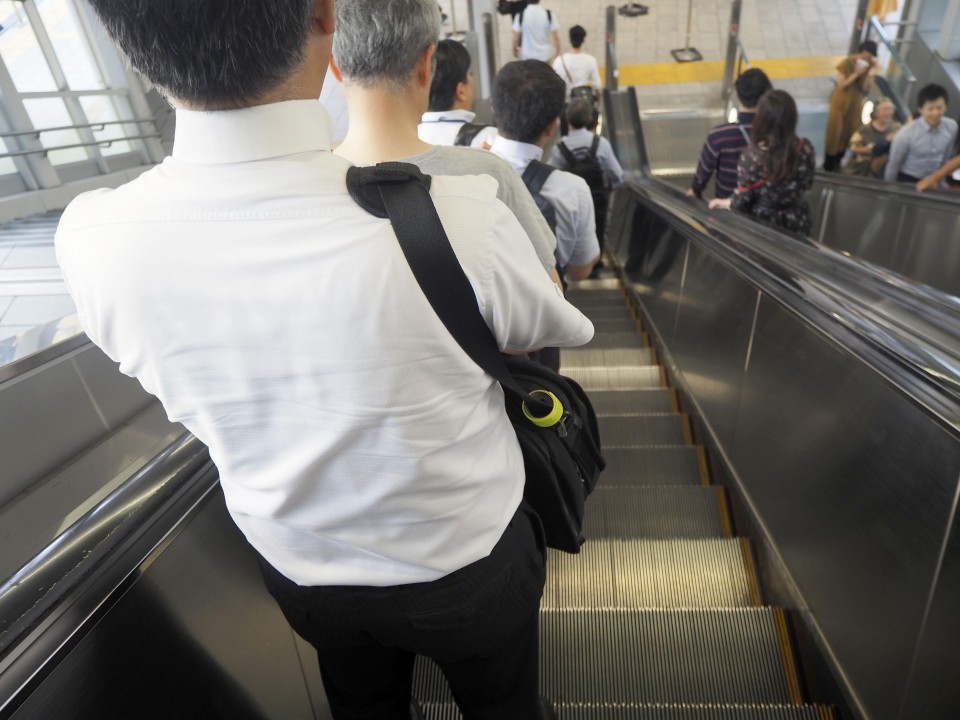 In fact, keeping passengers from walking up or down escalators has been on the to-do list of railway operators for many years.

Companies have held summer campaigns nearly every year, urging passengers to stand still and hold onto the handrail -- adding for the first time this year a direct request not to walk.

Despite some complaints from passengers who argue changing the convention is a nuisance for people on the go, the companies are asking for understanding out of safety concerns.

Japan, of course, is not the only country where convention dictates which side of the escalator people are expected to stand. "Please stand to the right" is the watchword on the London Underground.

Yet in 2016, Holborn Station experimented with standing-only escalators to see if they improved efficiency. The result? By having people stand on both sides, they were able to carry more passengers at peak times and cut congestion -- although the initiative has not been rolled out.

Back in Japan, user safety remains the prime motivation for promoting a change in habit, so that all escalators users may step aboard a moving stairway with peace of mind.

"All sorts of people stream onto an escalator -- from tourists with large pieces of luggage to the elderly using canes," said a JR East official as he contemplated the latest campaign. "It won't be easy to do away with this long-held convention right away, but we hope to make this an opportunity for change." 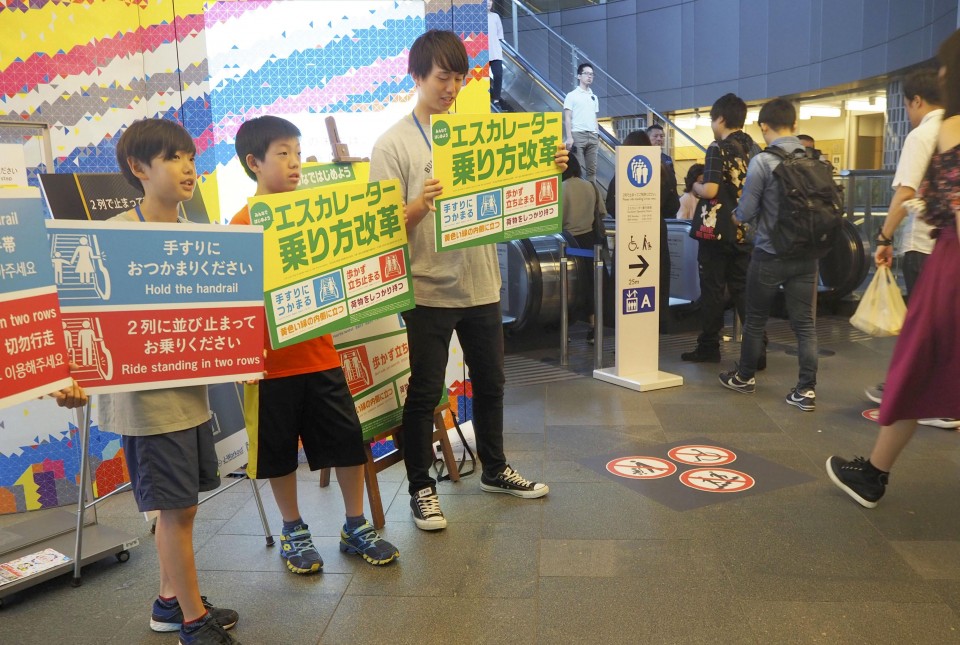