Three Vietnamese men on a foreign trainee program in Japan have sued a construction company for making them conduct radioactive decontamination work related to the March 2011 nuclear disaster in Fukushima Prefecture without prior explanation, supporters of the plaintiffs said Wednesday.

The lawsuit, dated Tuesday and filed with a branch of the Fukushima District Court, demanded that Hiwada Co., based in Koriyama in the northeastern Japan prefecture, pay a total of about 12.3 million yen in damages, according to the supporters. 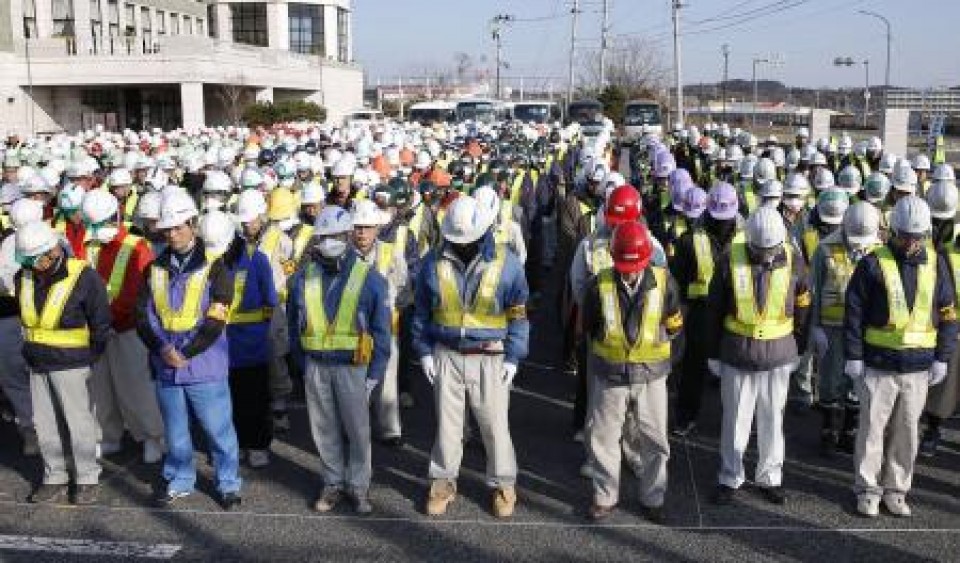 (Workers involved in decontamination work in the northeastern Japan town of Namie offer silent prayers to mourn victims of the March 2011 massive quake and tsunami on March 11, 2016.)

The case is the latest in a string of inappropriate practices under the Japanese government's Technical Intern Training Program which has been often criticized as a cover for cheap labor.

According to Zentouitsu Workers Union, a Tokyo-based labor union that supports foreign trainees, Hiwada made the plaintiffs conduct decontamination work in the cities of Koriyma and Motomiya in Fukushima Prefecture between 2016 and 2018.

The Vietnamese, who arrived in Japan in July 2015, also did pipe work in the town of Namie while evacuation orders were still in place.

The plaintiffs' contracts only said they would be engaging in reinforcing steel placement and formwork installation.

Hiwada did not provide them with detailed explanation on decontamination work beforehand, and it did not offer sufficient training either.

"We were not told that it was dangerous work. I am very worried about my future health," said one of the plaintiffs, a 36-year-old, in a written statement.

In separate instances, foreign trainees have said they were inappropriately involved in decontamination work in Fukushima, including a Vietnamese man who said in March last year that he was hired by a construction firm in Morioka, Iwate Prefecture.

The Justice Ministry and the Ministry of Health, Labor and Welfare have said decontamination work does not fit the purpose of the trainee program.