Japanese Prime Minister Shinzo Abe and Russian President Vladimir Putin remained at odds on Thursday over negotiations for a long-standing bilateral territorial dispute, with Putin citing the United States as an obstacle to signing a postwar peace treaty with Japan.

In a meeting in Vladivostok in the Russian Far East, Abe and Putin, however, agreed to promote talks for the dispute over four Japanese-claimed, Russian-held islands off Hokkaido and the conclusion of a peace treaty in a "future-oriented" fashion, a senior Japanese official said.

The two leaders will next hold a meeting on the sidelines of a summit of the Asia-Pacific Economic Cooperation forum slated for November in Chile, according to Deputy Chief Cabinet Secretary Kotaro Nogami.

Abe and Putin instructed their foreign ministers to speed up work so the two sides can find a mutually acceptable solution to the territorial issue, Nogami told reporters, without providing details about Thursday's meeting.

Speaking at a regional economic forum after talks with Abe, Putin said he sees many challenges before signing a peace treaty, including Japan's security alliance with the United States.

Moscow is concerned that handing over the islets -- which the Soviet Union seized after Japan's surrender in World War II on Aug. 15, 1945 -- would lead to an increased American military presence on its doorstep. 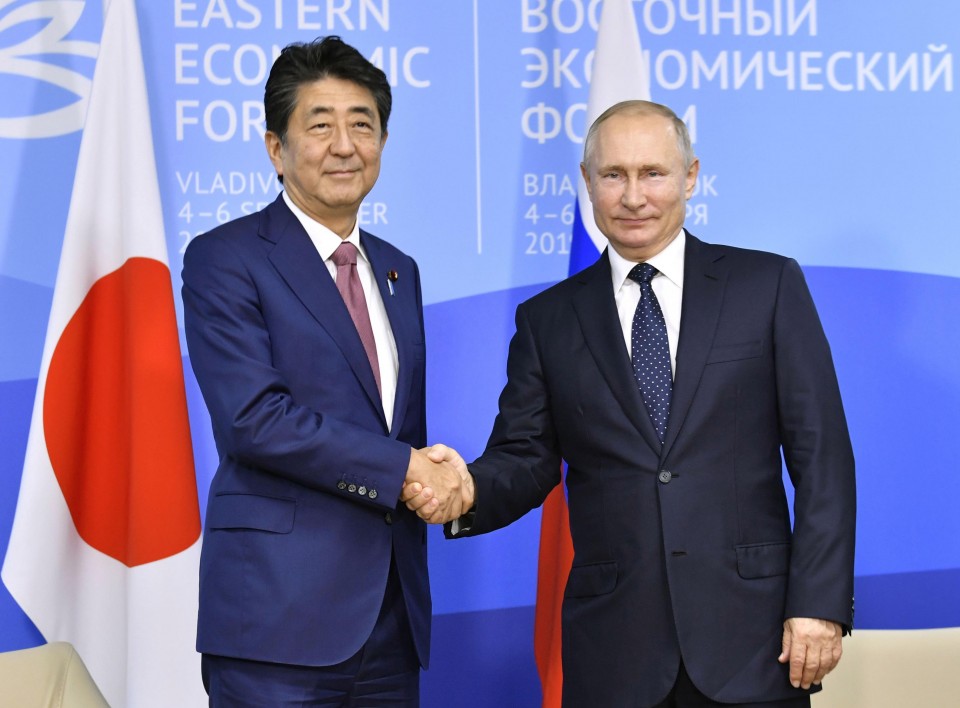 "There are issues of military and defense nature, the issues of security, and here we should take into account the position of third countries and Japan's commitment to third countries, including the U.S.," Putin was quoted by Tass news agency as telling a plenary session of the Eastern Economic Forum.

Putin also said that if the United States deploys missiles to Japan and South Korea, they will cover considerable part of Russia.

Speaking in the same session, Abe urged Putin to step up efforts to resolve the territorial dispute and sign a postwar peace treaty.

The Abe-Putin meeting, the 27th of its kind, came as Russia has recently hardened its stance on the disputed islets, known as the Northern Territories in Japan and the Southern Kurils in Russia.

Earlier Thursday, Putin welcomed the opening of a seafood processing factory on Shikotan by sending a video message to a ceremony marking the start of operations, a move seen as showing off Russia's control of the islands.

Two other islands are Kunashiri and the Habomai islet group.

However, Putin told the economic forum he will aim to conclude a peace treaty with Japan based on a 1956 joint declaration.

The declaration, approved by the parliaments of Japan and the Soviet Union, says Shikotan Island and the Habomai islet group will be handed over to Japan following the conclusion of a peace treaty.