Ichiro Suzuki, who amassed 4,367 hits over his historic career in Japan and the majors, was honored with the Seattle Mariners Franchise Achievement Award on Saturday and took the opportunity to thank the home crowd with a speech in English.

The 45-year-old, who announced his retirement in Japan in March following the Mariners' season-opening series in Tokyo, lamented being unable to share that moment with the Seattle fans who had supported him throughout the majority of his time in the big leagues.

"When I retired that night in Tokyo, I had an incomplete feeling because the great fans of Seattle could not be there. Tonight, I want to express my appreciation to you for your touching support over the years," Suzuki said. 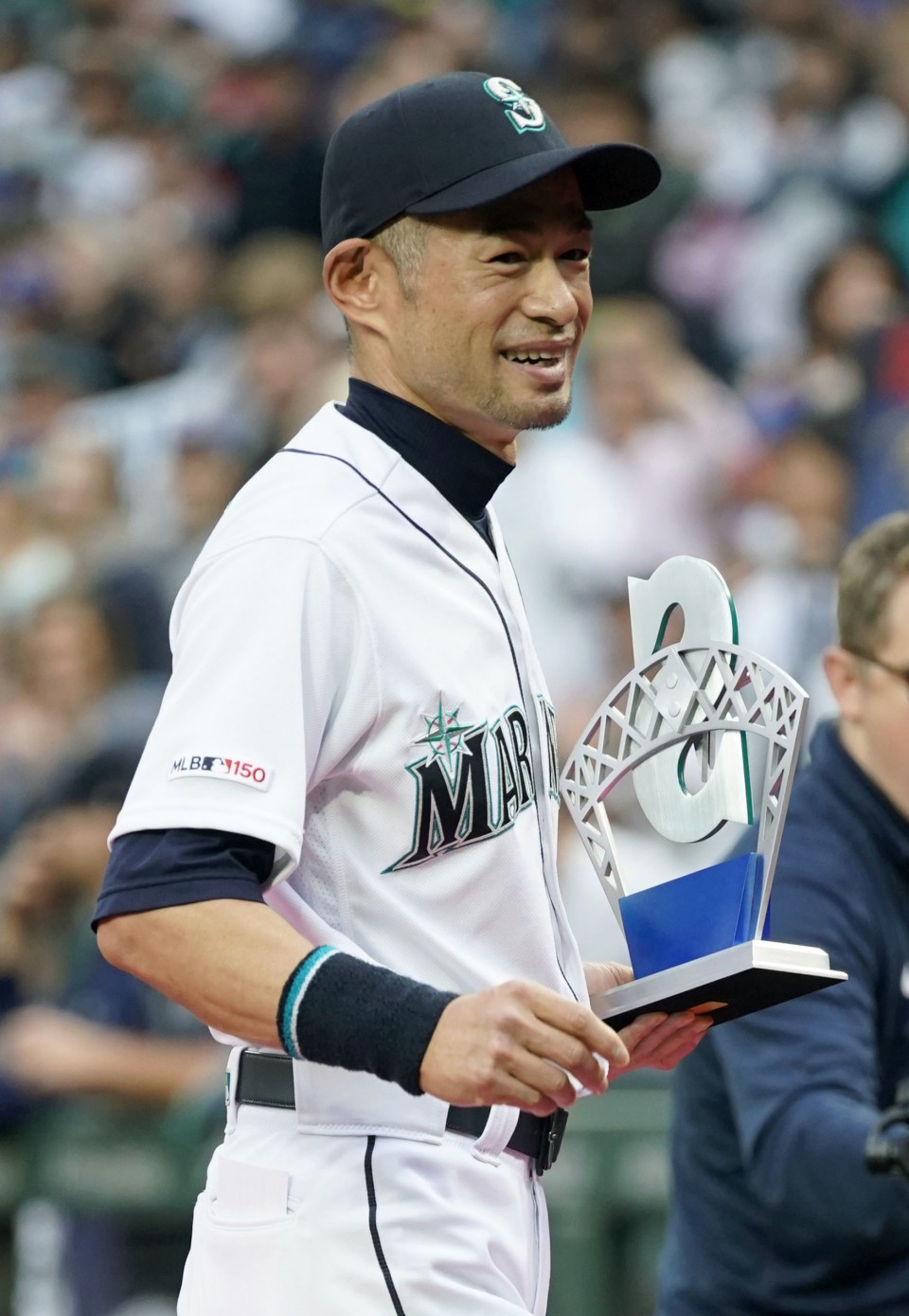 "When I came to Seattle in 2001, no position player had ever come from Japan before. The one you got was 27 years old, small and skinny. And unknown."

"You had every reason not to accept me. However, you welcomed me with open arms and you have never stopped, even when I left and came back. I was so grateful for the chance to return in 2018, and the reason is you fans. Thank you Seattle."

Baseball: Ichiro Suzuki back at work with Mariners

The ceremony was attended by former Mariners Hall of Famers Ken Griffey Jr. and Edgar Martinez, as well as Suzuki's former teammates -- including compatriot Yusei Kikuchi, who is making his major league debut with the Mariners this season.

Afterwards, Suzuki opened up in Japanese about giving the speech in English. 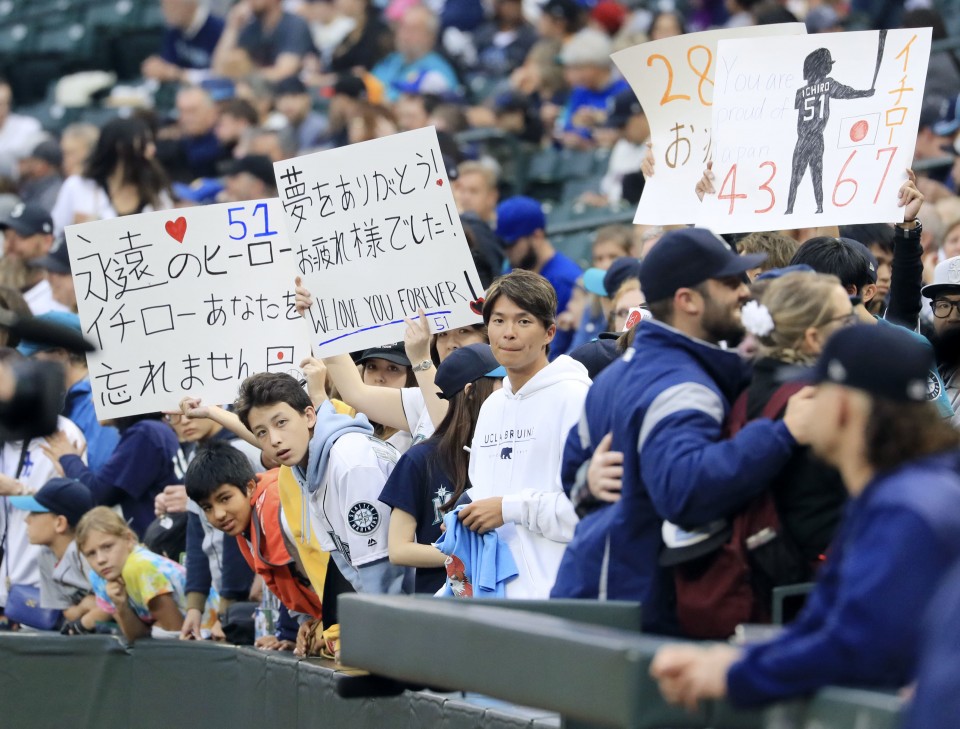 "At first I thought it would be difficult but I talked with the team. It was conveyed that it would be important for them as well. So I felt I'd try my best," he said.

"I wrote it in Japanese and then translated it to English, and it just barely turned into these sentences. Somehow I practiced with that atmosphere."

The former outfielder said the biggest thing for him was getting the chance to stand in front of the Seattle crowd wearing the team's white home uniform and leave that image as a "fitting final impression." 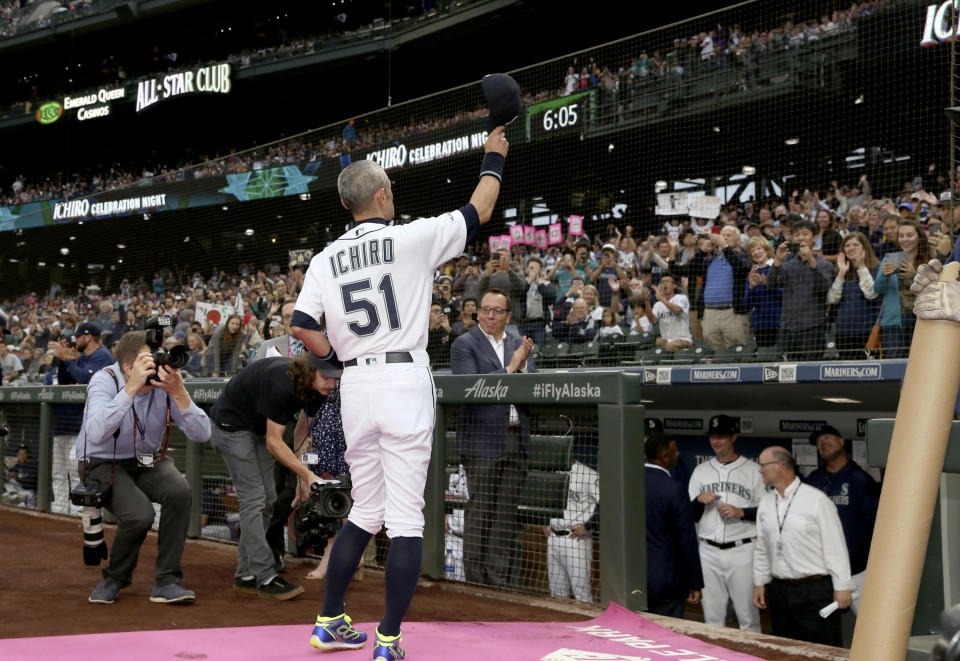 Suzuki joined the Mariners in 2001 after nine seasons in Japan with the Orix BlueWave, now known as the Orix Buffaloes. He split with Seattle in 2012 and had short stints with the New York Yankees and Miami Marlins before returning to the club in 2018.

The Mariners cut him from their active roster that May but asked him to stay on with the club that year as special assistant to the Mariners' chairman. For the remainder of 2018, Suzuki practiced with the team and also served as a temporary coach as he worked toward returning to active duty in 2019.

Suzuki started his 28th professional season of baseball in March, when he played two games in Tokyo before announcing his retirement. After that, the job of major and minor league instructor was added to his other advisory duties.