China is now the "most important" dialogue partner of the Association of Southeast Asian Nations, according to ASEAN foreign ministers who held an annual series of meetings last week in Bangkok.

Philippine Foreign Secretary Teodoro Locsin made that declaration at Wednesday's ASEAN-China ministerial meeting, saying further that ASEAN's dialogue relations with China "should be the most dynamic and substantive we have in the region."

Thai Foreign Minister Don Pramudwinai, whose country chairs ASEAN this year, said Locsin's sentiment is shared by many in the 10-member bloc and can safely be regarded as ASEAN's position.

In 2003, ASEAN and China elevated their relations to "strategic partnership," as it did with some of the other dialogue partners in varying years.

"Since the commencement of our dialogue relations in 1991, our engagement with China has deepened and expanded to a whole range of areas of cooperation," said Locsin, whose country acts as coordinator between ASEAN and China for the period 2018-2021.

At the Wednesday meeting, Chinese Foreign Minister Wang Yi said "China-ASEAN relations have now become a banner of regional cooperation in East Asia," and their "exchanges have become a role model for inter-civilization exchanges and cooperation in the world."

Wang said his country "has maintained its position as ASEAN's largest trading partner for 10 years in a row," with two-way trade in 2018 reaching $580 billion, and has signed bilateral documents on its Belt and Road Initiative with each ASEAN country.

He said there is also mutual respect as both treat each other as equals and "work together to promote mutual learning among civilizations."

Even on the disputes in the South China Sea, which involve some ASEAN member countries, Wang said China and ASEAN "focus on properly handling our differences, and work together to uphold peace and stability."

He noted that the completion ahead of schedule of the first round of talks for a Code of Conduct in the South China Sea showed how sincere China and ASEAN are in the consultations.

According to Locsin, China and ASEAN are engaged in 47 mechanisms across all sectors. "We thank China for its active participation and increased engagement in various ASEAN sectoral bodies and mechanisms, and for respecting ASEAN centrality in these organs," he said. 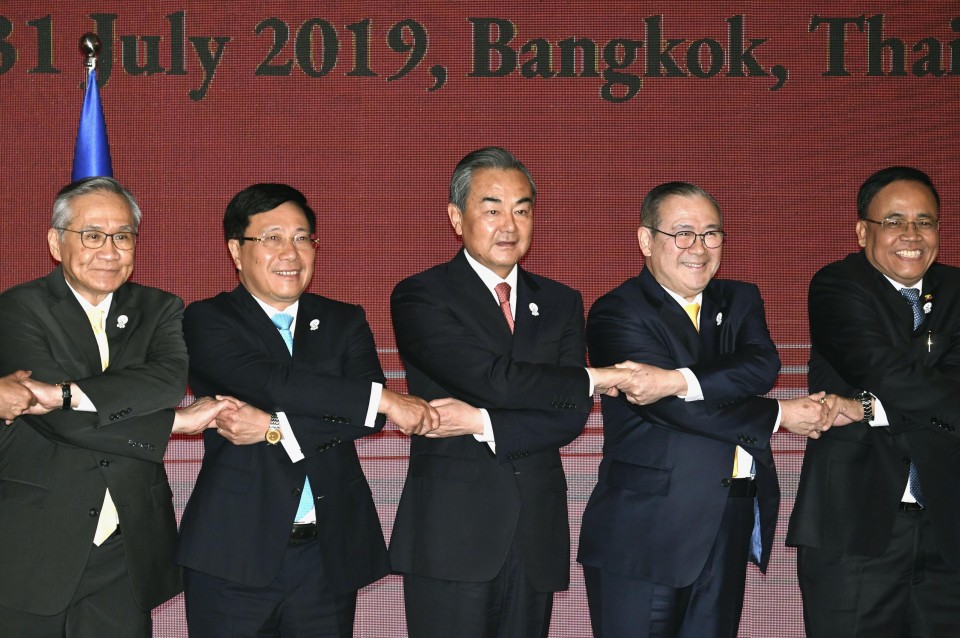 (Chinese Foreign Minister Wang Yi (C) poses for a photo in Bangkok on July 31, 2019, with his counterparts from member states of the Association of Southeast Asian Nations.)

Before the ASEAN and Chinese foreign ministers formally began their meeting, they first launched the ASEAN-China Young Leaders Scholarship that allows ASEAN students to take post-graduate studies in Chinese universities with a budget of more than $7.3 million from 2019 up to 2023.

Locsin described the program as a "key project for ASEAN-China Dialogue Relations," strengthening "academic innovation that encourage more exchanges for mutual understanding between ASEAN and China."

Wang disclosed the first batch of nearly 100 scholarship recipients are already set to go to China in September.

"For our relationship to go steady and far, the strongest driving force will come from our people. And education holds the key to a close people-to-people bond," he said.

"We hope that such mutual learning would help connect hearts and minds of our young people, and prepare them for becoming future force for continuing and growing the China-ASEAN friendship and cooperation."

Alan Chong, an associate professor at the S. Rajaratnam School of International Studies in Singapore, told Kyodo News that "momentarily, China has the upper hand" among the ASEAN dialogue partners because its Belt and Road Initiative was launched as the United States, under the presidency of Donald Trump, adopted a foreign policy shift.

"China is winning because of this unusual combination of factors in its favor," Chong said in a phone interview.

He said the planned institutionalization of the ASEAN-China Maritime Exercise is consistent with Beijing's efforts to remain relevant in Southeast Asia as this kind of activity "gives China a special way of influencing the defense diplomacy and the broader political relationship with ASEAN."

The new scholarship program, on the other hand, is one of so-called "non-military instruments" that China is using "to draw ASEAN closer to its orbit," even as he acknowledged that it certainly gives education opportunities to young people in the region.

"If you look at it cynically, you might want to ask: how different is this from the way the United States or the former colonial powers played it in the 1960s and 1970s, during the Cold War? All the big powers use scholarships to entice the so-called up and coming generations of young people to their side," Chong said.

"So it's a form of ideological courtship."

Despite China's current status in ASEAN, Chong observes "all of these 10 ASEAN countries are also carefully watching what comes with the Chinese economic assistance."

"Who knows that Japan, Australia, and potentially, of course, if I dare say this, a post-Trump United States will all be courted again by ASEAN because they are worried that China will have disproportionate influence?" he said.

"So we'll continue to see this balancing game."

Wang, in the meantime, sought to assure ASEAN that China will continue to view it "as a priority in its neighborhood diplomacy," saying, "We are ready to continue to work with ASEAN to build on the progress we have made in our cooperation, and continue to enhance mutual political trust, (and) tap potential in our cooperation so that we will be able to foster a strategic partnership at a higher level and a closer community with a shared future."