The documentary film "Ask Dr. Ruth" chronicles the remarkable life of Ruth Westheimer, an orphan of the Holocaust who ascended to fame in the 1980s as a sex therapist and talk show personality after immigrating to the United States.

As the film, which premiered earlier this year at Sundance Film Festival, opens internationally throughout the summer including in Japan in late August, Westheimer spoke with Kyodo News in her New York home about abortion access and the rights of migrants amid developments she finds "very problematic" as a reproductive health expert and former child refugee.

"I do not deal in politics, because I talk about sex from morning to night, I write books on sex," said the 91-year-old German American, who despite decades in the public eye has largely refrained from political commentary.

"But I changed my mind (to speak out) on three political issues: don't separate children from their parents, give enough money to Planned Parenthood and abortion must remain legal."

The well-known educator and author was referring to policies of U.S. President Donald Trump's administration that have led to family separations at migrant detention centers near the U.S.-Mexico border, as well as recent efforts to roll back reproductive health funding and abortion rights.

"I am very upset when I see children being separated from their parents at the border from Mexico, because (separation) is what happened to me," Westheimer said.

As the child of Orthodox Jewish parents in central Germany in the 1930s, Westheimer remembers looking on at age 10 when her father was arrested to be sent to a Nazi labor camp.

"I looked out the window when he was picked up, and I was very sad, (but) he was smiling and waving because he hoped that he would see me again," she said.

The film documents Westheimer's recent visit to Yad Vashem, the World Holocaust Remembrance Center in Israel, where records from Nazi Germany list her mother as "verschollen," or disappeared, and indicate her father was likely killed at the Auschwitz concentration camp in Poland.

In tracing Westheimer's early years, the film recounts her journey as a child refugee in the Kindertransport rescue effort, her youth in a Swiss orphanage, and her service during her late teens in a Jewish militia in Jerusalem, where she trained as a scout and sniper.

After studying psychology at the Sorbonne in Paris, Westheimer immigrated to New York City in 1956 with her then husband and firstborn child. In the years before abortion was decriminalized at the federal level in 1973, she based her doctoral dissertation on issues of contraception and unwanted pregnancies, and worked for the long-running reproductive health nonprofit Planned Parenthood.

"There always will be contraceptive failures. That is the way it goes -- people will try to use contraception and it fails and they get pregnant," she said.

"I am very upset if abortion becomes illegal again, because then only women with money will be able to obtain (safe) abortion...people with no money will go to (second-rate) abortionists and to coat hangers. It will be terrible." 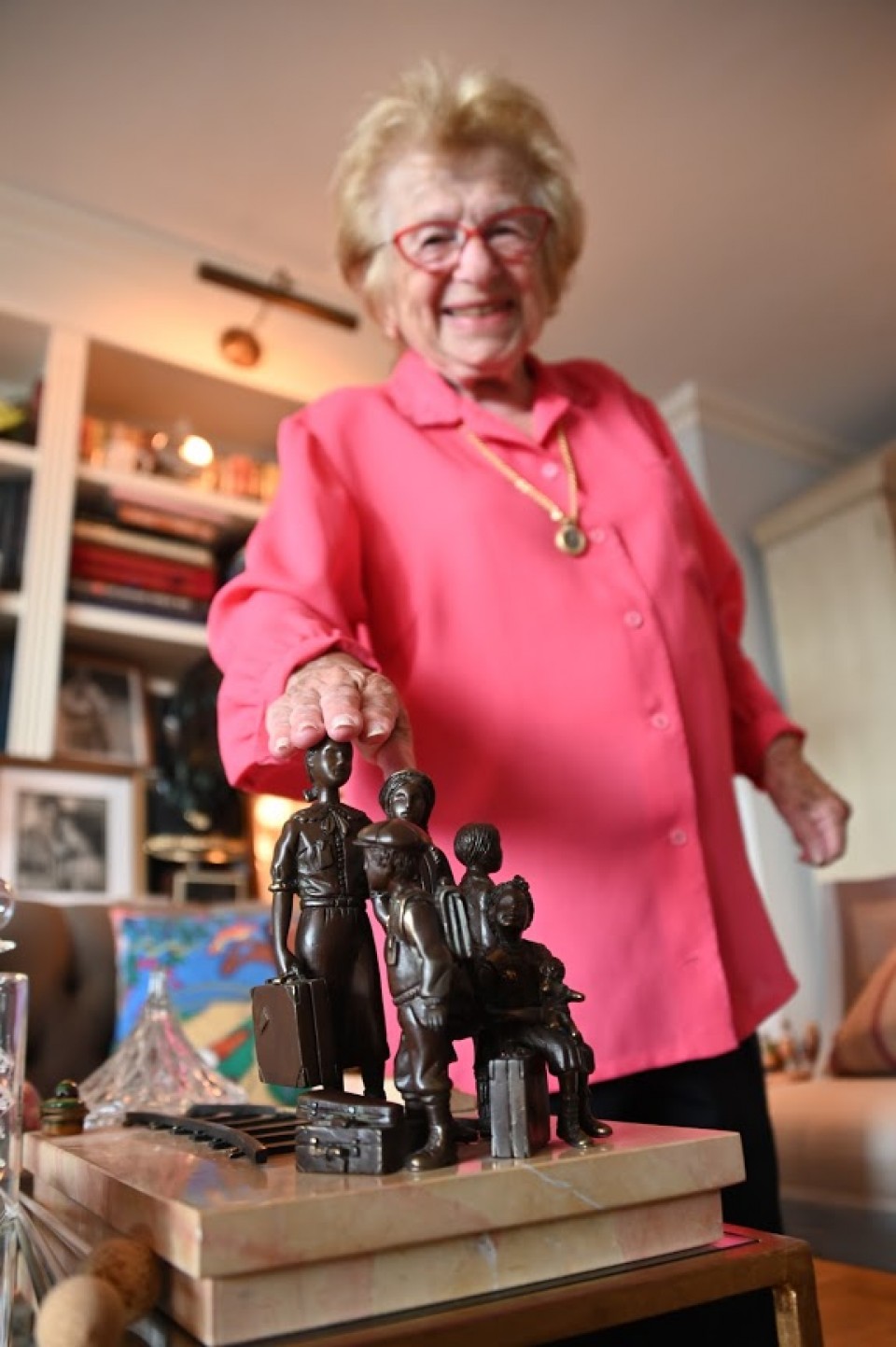 (Ruth Westheimer poses with a small replica of "Kindertransport -- The Arrival," a Frank Meisler sculpture in London commemorating the arrival of WWII-era Jewish child refugees)

During her three years of work with Planned Parenthood in the late 1960s, Westheimer sometimes had difficulty with questions related to patients' sex lives. Inspired to dig deeper into the subject, she enrolled in a Cornell University program to study under Dr. Helen Singer Kaplan, a pioneer in the field of sex therapy.

Westheimer launched her media career in the early 1980s after a guest appearance on local radio led to hosting her own show, "Sexually Speaking" on New York's WYNY-FM, which later became nationally syndicated as "The Dr. Ruth Show" on NBC Radio. Her first television program "Good Sex! With Dr. Ruth Westheimer" started in 1984, and she continued to host national talk shows about sexual issues and reproductive health into the early 1990s.

The diminutive sex therapist -- who, with her characteristic German accent, became a household name as "Dr. Ruth" -- will be inducted into the Radio Hall of Fame this November. She has authored dozens of books, beginning with "Dr. Ruth's Guide to Good Sex" in 1983, and made frequent late-night talk show appearances with the likes of Johnny Carson and David Letterman.

As an immigrant who found a better life in the United States, Westheimer remains optimistic about the country's long-term prospects as a beacon of hope for refugees.

"I am an optimist. Even though I am upset about today, I still think there are enough young people of good faith who are going to be careful that Emma Lazarus's poem will still be alive," she said, referring to "The New Colossus," an immigrant-welcoming 1883 poem on the pedestal of New York's Statue of Liberty.

The memory of catching her first glimpse of the statue while sailing into New York's harbor remains important to her. In addition to a small replica of "Kindertransport -- The Arrival," a Frank Meisler statue in London commemorating the arrival of Jewish child refugees, she also keeps in her apartment a print of Bernarda Bryson Shahn's "30,000,000 Immigrants," a 1935 lithograph depicting new arrivals with the Statue of Liberty visible in the background.

"When I see the Statue of Liberty, I wish they would bring (it) right here to the Hudson -- bring her here so I can see her every day," she said with a laugh.

The feature-length documentary "Ask Dr. Ruth," directed by Ryan White, opened in North American theaters in May and became available for online streaming in June.

Following debuts in Israel and the Netherlands earlier in the month, it will come to theaters in Japan on Aug. 30.