This year's G-7 summit started with talks on diplomatic and security issues over dinner on Saturday, as the United States and other members have been at odds over the Iran nuclear deal and Russia's potential return to the group's framework. 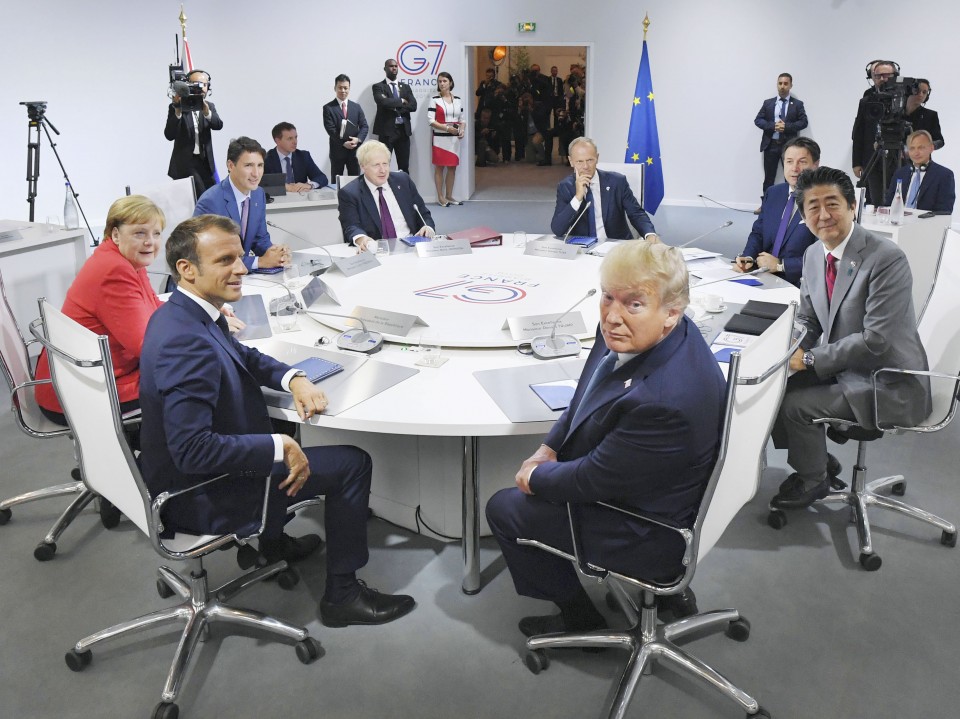 On the second day of their annual gathering in the French resort town of Biarritz, many G-7 leaders voiced fears over recently intensifying trade strains, Deputy Chief Cabinet Secretary Yasutoshi Nishimura said, apparently taking into account those between the world's two largest economies.

Against the backdrop of the U.S.-China tit-for-tat tariff war and uncertainty over the United Kingdom's exit from the European Union, the advanced economies, including those of Germany and Japan, have shown signs of slowing down.

Nishimura, however, did not elaborate on what kind of steps the G-7 can implement, underscoring the difficulties that the group can unite to ease trade tensions and shore up the global economy.

The G-7 comprises Britain, Canada, Germany, France, Italy, Japan, and the United States, as well as the European Union.

U.S. President Donald Trump said Friday that planned tariffs to be imposed on around $300 billion worth of Chinese imports from Sept. 1 and Dec. 15 will be raised by 5 percentage points to 15 percent.

Trump added that the United States will raise tariffs on about $250 billion worth of Chinese products to 30 percent from the current 25 percent from Oct. 1.

Hours before the announcement, China pledged to impose additional tariffs of 5 percent or 10 percent on a total of 5,078 U.S. goods worth around $75 billion, sparking speculation that trade spats between Washington and Beijing would be prolonged. 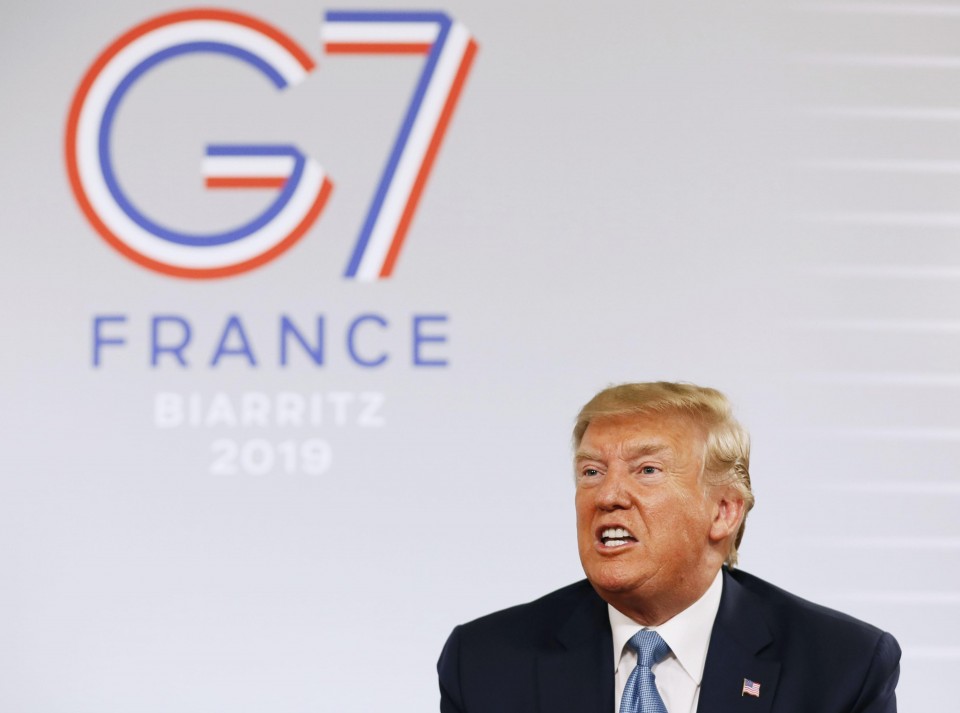 In the previous G-7 summit in Canada in 2018, Trump abruptly backed off from a joint communique at the last minute after engaging in a war of words with the host, Canadian Prime Minister Justin Trudeau, over trade policy.

As some G-7 leaders have criticized Trump for his shift toward trade protectionism aimed at benefiting U.S. industries, this year's host French President Emmanuel Macron has indicated a post-summit joint communique, which sums up the leaders' discussions, will not be issued for the first time in the group's 44-year history.

Should the G-7 fail to form a united front in efforts to tackle economic uncertainties, volatility in financial markets is likely to worsen, stifling private investment and spending across the globe amid concerns that the world economy will face greater challenges, pundits said.

The trade row between Washington and Beijing contributed to a shrinking of the German and British economies real terms from a year earlier in the April-June quarter.

The U.S. and Japanese economies grew in the same period, but the pace of growth slowed compared with the previous quarter.

Since July last year, Washington has imposed higher levies on Chinese imports in an attempt to reduce the chronic U.S. trade deficit with China and to address Beijing's alleged unfair trade practices such as intellectual property and technology theft.

Trump, meanwhile, has suggested the United States may impose tariffs on French wine in retaliation for the country's planned new digital tax on information technology giants, while considering additional levies on cars from the European Union on the grounds of national security.

Regarding diplomatic and security matters, the G-7 leaders shared the view on Saturday that Iran should not possess nuclear weapons for peace and stability in the region, but they have still differed in their approaches to finding a resolution to the issue.

As for Trump's push for a return of Russia to the G-7 group, other member nations have been opposed due largely to a lack of progress on the Crimea problem, sources familiar with the debate said.

Russia was dropped from the then Group of Eight after its annexation of Crimea in 2014, which sparked an international outcry.

Other agenda items set for the G-7 summit on Sunday included inequality and issues related to Africa.