Actor Temuera Morrison said playing former Japan coach Eddie Jones in the movie "The Brighton Miracle" -- the official trailer of which was released Friday -- gave him real insight into "the drive and ruthless commitment and passion" behind one of the greatest sporting upsets of all time.

"I heard he was not the most likeable chap but that's what you get if you want to attain some of these levels of perfection. That's what you've got to be," Morrison said of the man who led Japan to a 34-32 win over two-time world champions South Africa at Rugby World Cup 2015.

The movie, which will be released worldwide a week before the 2019 World Cup kicks off in Tokyo on Sept. 20, "tells how Eddie Jones masterfully plotted a result that endures as proof that the impossible is indeed possible. It's a story of people with persistence and tenacity who dared to believe, and in doing so conquered an unbeatable foe and gave hope to millions." 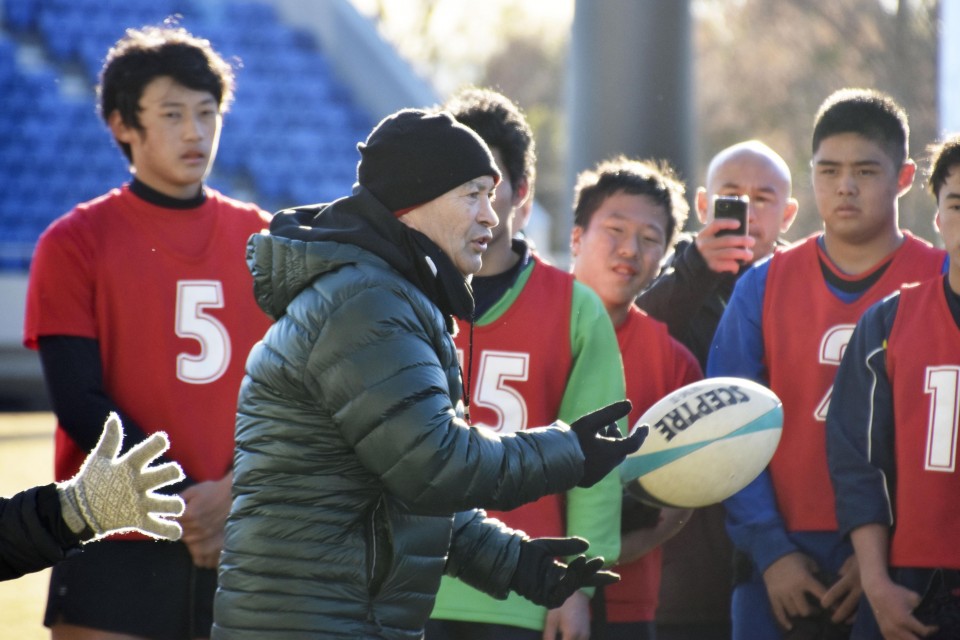 The movie highlights Jones' background as a half-Australian, half-Japanese boy growing up in Australia in the 1960's, post World War II and during the Vietnam War, and also deals with the stroke he suffered in 2013.

"This film is about mindset change and about having the courage to be yourself," writer/director Max Mannix told Kyodo News. "He had issues at school for "being Asian" when his father was fighting for the country in Vietnam. But Eddie Jones couldn't run away from being Eddie Jones. What made Eddie, Eddie?"

Morrison admitted he was surprised to get the phone call to play Jones particularly given some of his more famous roles in "Once Were Warriors," the Star Wars movies and "Aquaman."

"Are you sure? I am a Maori from Rotorua, New Zealand," he told Mannix, who was part of the writing team on the production "Tokyo Sonata" that won Best Film at the 3rd Asian Film Awards and the Un Certain Regard at the 2008 Cannes Film Festival.

"Normally I play characters that come from outer space but this one is a real deal person," Morrison said.

And a person who is very driven.

"Researching Eddie and reading about him and watching him, it's been quite good for my own personal life in a way because he's such a go-getter, such a motivator," the 58-year-old New Zealander said.

"I decided to totally immerse myself and fond out as much as I could about Eddie. The way he doesn't look at just the rugby, he looks at the whole culture."

Morrison admitted that some of his friends had already commented on who much he looks like Jones in the movie -- "We have similar eyebrows," he joked -- while one former Wallaby who played under Jones said the actor had perfected the Australian's "stink eye."

Following on from the victory over South Africa, the Brave Blossoms -- who came into the tournament with just one win, two draws and 21 losses to their name from previous World Cups -- lost to Scotland before beating Samoa and the United States to become the first side to win three pool games but fail to reach the quarterfinals.

"This film will be watched by millions. I like the format, it's real, it's true, the story behind it all is the reason we won," said Leitch.