A set of stamps commemorating the first-ever U.S.-North Korea summit in June last year are currently on sale in the North Korean capital, although denuclearization negotiations between the two sides show little sign of moving forward.

The set of three stamps was launched on June 12, the one-year anniversary of the historic summit in Singapore between North Korean leader Kim Jong Un and U.S. President Donald Trump, a female worker at a stamp shop in Pyongyang told Kyodo News on Sunday. 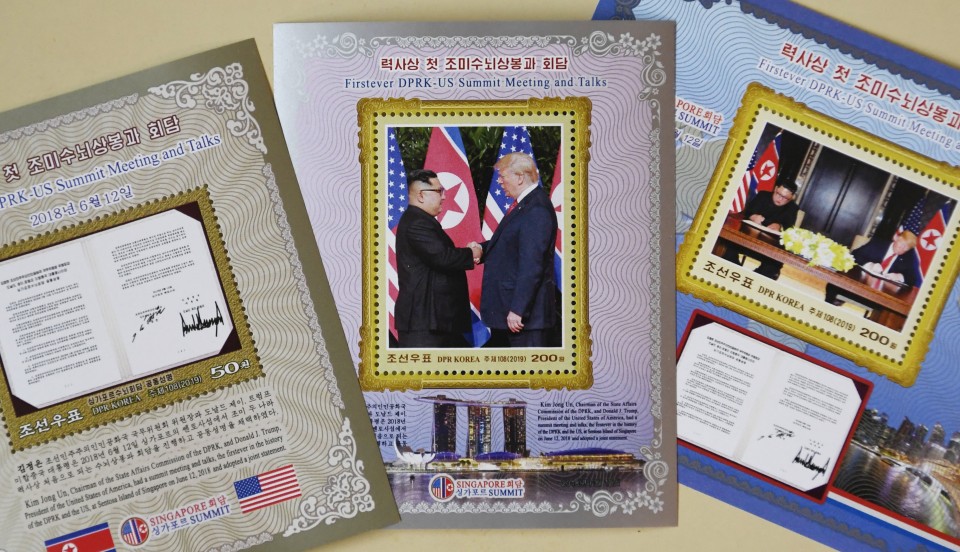 The stamps depict the first handshake between Kim and Trump, their singing of a joint agreement following the summit, and the full text of the statement.

Around Tuesday, a month after Kim and Trump met at the inter-Korean truce village of Panmunjeom on June 30 in their third encounter, stamps marking the event are scheduled to be released, the worker said.

South Korean President Moon Jae In, who accompanied Trump to Panmunjeom, will not be appearing in the stamps, the worker added. His absence is a further indication of Pyongyang's eagerness to continue talks with Washington without intervention from Seoul.

North Korea is believed to want the United States to provide security guarantees to Pyongyang. The two countries remain in a technical state of war, as the 1950-1953 Korean War ended in a cease-fire.

Ensuring the continuation of the current political system led by the Kim family is a long-sought goal by Pyongyang.

On Friday, North Korea's state-run media reported that Kim oversaw the "demonstration" firing of a "new-type tactical guided weapon" on Thursday to send a warning to the South against holding a joint military drill with the United States next month.

North Korea has long called on the United States and the South to halt joint military exercises, which Pyongyang regards as rehearsals for invasion.