An exhibition featuring more than 100 sports manga kicked off Saturday in Tokyo, offering interactive experiences through cutting-edge technology ahead of the 2020 Tokyo Olympics and Paralympics.

In the exhibition organized by electronics maker and Olympics sponsor Panasonic Corp., visitors can experience taking the place of a sports character, such as a tennis player, as a screen projects manga-like illustrations around them. Displayed works, meanwhile, include legendary soccer manga "Captain Tsubasa," boxing manga "Ashita no Joe" and recent cycling saga "Yowamushi Pedal."

"I truly hope that by experiencing this (exhibition), the excitement for the Tokyo 2020 Games will continue to grow," Tokyo Gov. Yuriko Koike said in a pre-opening ceremony Friday at Panasonic Center where the event is being held through Sept. 29. 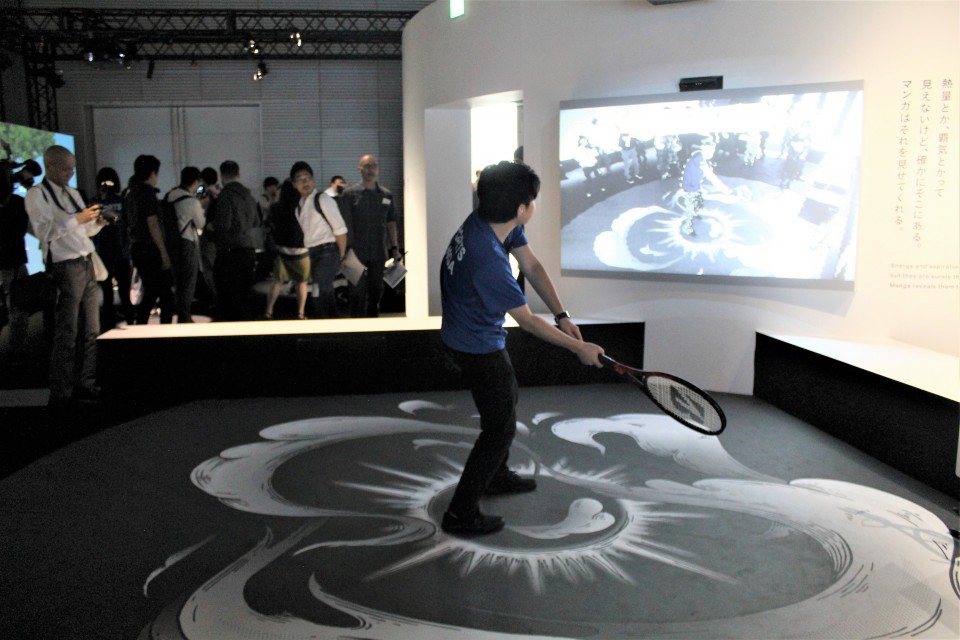 The exhibition, which is open to the public for free, is expected to attract around 5,000 people, including avid manga fans and foreign visitors, according to Panasonic.

Titled "Sports x Manga," the exhibition is separated into seven themes, covering the history of sports manga and Japanese society, interviews with Japanese Olympic athletes who were inspired by manga, as well as "killer moves" seen in manga that deviate from real world sports.

Manga and anime on Paralympic sports are also showcased in the event, while there is an area displaying various manga expressions, such as motion lines and balloons.

"This is an exhibition through which you can feel and experience the fascination of sports through a familiar Japanese culture -- manga," said Panasonic Executive Officer Satoshi Takeyasu at the ceremony.

The exhibition is open from 10 a.m. to 6 p.m. Panasonic Center near Ariake Station in the Odaiba waterfront area is closed on Mondays, except for July 15 and Sept. 16.