Sumo: All eyes on Hakuho as he returns from injury in Nagoya

Mongolian grand champion Hakuho will be in the spotlight as he returns from an injury layoff and bids for a record-extending 43rd championship, at the Nagoya Grand Sumo Tournament, which kicks off Sunday.

While Hakuho and fellow yokozuna Kakuryu may be considered the favorites at the July 7-21 tournament at Dolphins Arena, they will need to stave off the sport's young up-and-comers, led by new komusubi Abi and No. 1 maegashira Asanoyama, both 25 years old.

Hakuho skipped the Summer Grand Sumo Tournament in May to treat a right arm injury he sustained on the final day of the March tourney. The 34-year-old resumed training at the beginning of June and has said he is in good shape as he guns for his first championship since his unbeaten 15-0 triumph in March.

"My sumo has become much better. Now it comes down to taking the lid off the pot and seeing whether I can catch some momentum," Hakuho said after training on Wednesday.

He will start his campaign against Abi, against whom he suffered a heavy loss in their only matchup in May last year. The grand champion will then face Asanoyama, who won his maiden championship two months ago, for the first time on Monday.

Kakuryu is aiming for a sixth championship, but has been hampered in his buildup after hurting his lower back in training on Monday.

While the 161-kilogram Mongolian has won 10 or more bouts in the past two tournaments, he has not lifted the Emperor's Cup since May last year. The 33-year-old will face newly-promoted komusubi Ryuden before his bout against top-ranked maegashira Hokutofuji the following day. 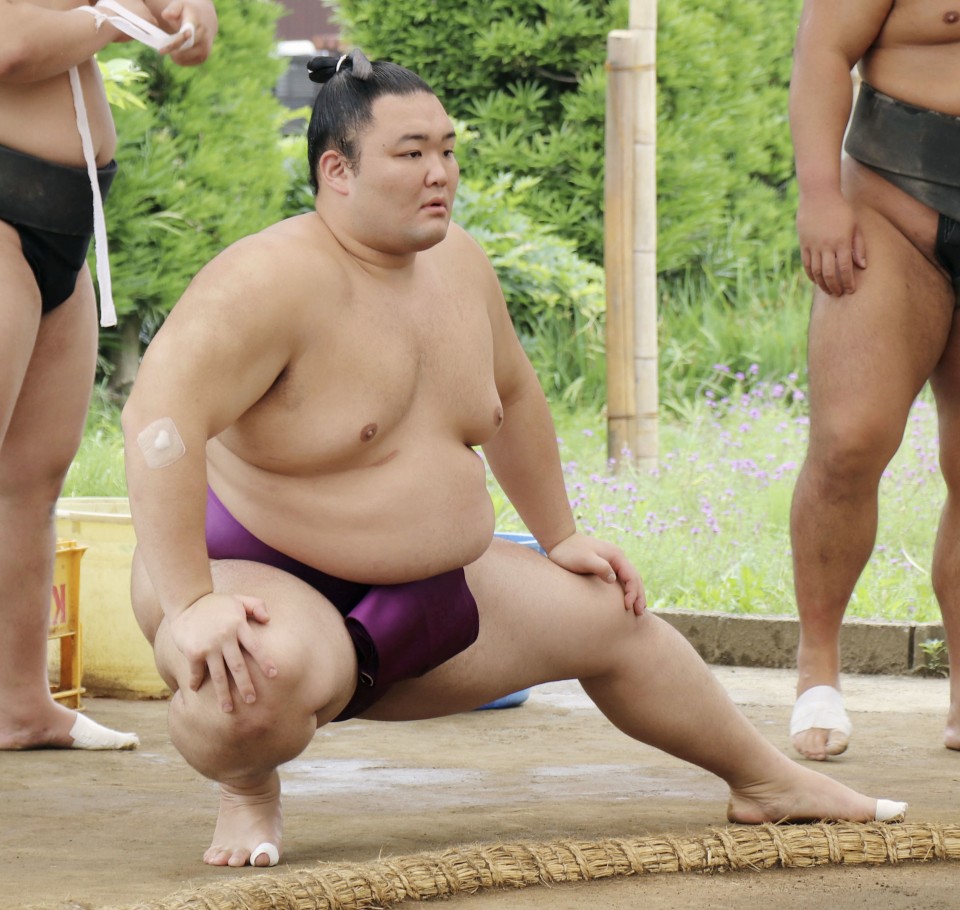 Following his breakthrough victory at Tokyo's Ryogoku Kokugikan in May, Asanoyama will also share the spotlight with the two grand champions. After winning his maiden championship with a 12-3 record, he is gunning for a place in the "sanyaku" ranks -- the three below yokozuna.

The three ozeki wrestlers are expected to face stern tests. Tochinoshin, promoted back to the sport's second-highest rank after going 10-5 in May as a sekiwake, has been feeling pain in his left shoulder, while Takayasu had limited training time after feeling discomfort in his lower back.

Goeido, who finished 9-6 in May, will open his campaign for a first title since 2016 against Asanoyama, with whom he has split two previous meetings.

Takakeisho, who was injured in his May debut as an ozeki and failed to win eight bouts, pulled out of Nagoya and will forfeit his ozeki status.

Takakeisho's stablemate, No. 10 maegashira Takagenji is the only wrestler making his debut in the elite makuuchi division. He will fight No. 11 Nishikigi on Sunday.