Japan's Kei Nishikori lost to Roger Federer of Switzerland on Wednesday, failing in his bid to become the first Japanese man in 86 years to reach the semifinals at Wimbledon.

Nishikori, competing in the quarters of the grass-court major for the second straight year, lost to eight-time champion Federer 4-6, 6-1, 6-4, 6-4 on Centre Court at the All England Club. 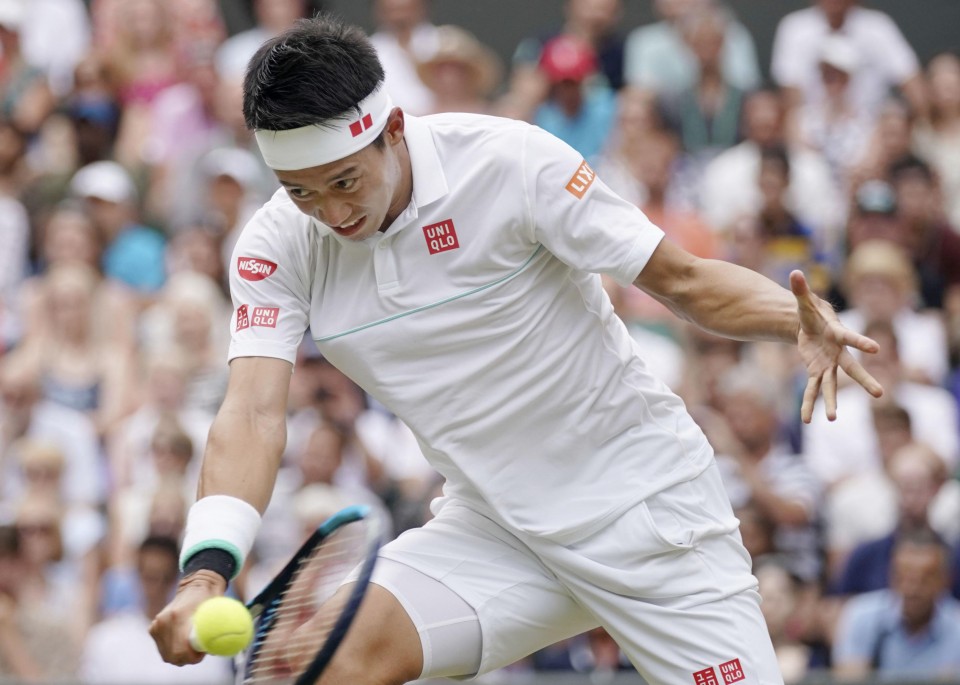 "I couldn't keep my game together after the first set," Nishikori said. "I had a tough time holding serve, and in the last two sets I made a lot of mistakes."

"But it was a good experience to play against such a strong opponent," he said of world No. 3 Federer, who claimed his 100th Wimbledon victory.

Nishikori got off to a superb start, grabbing a break in the opening game and threatening to go up 3-0 before Federer recovered to fend off a triple break chance and get on the board. Battling to hold serve at deuce in the sixth and eighth games, Nishikori managed to keep his advantage and take the first set.

But the 20-time Grand Slam winner Federer returned to formidable form in the second set, breaking his opponent's serve twice for a 5-1 lead. He put away an easy serve-and-volley on his first set point to level the match.

Federer continued to breeze through his service games in the third set while making Nishikori fight for difficult holds. Though Nishikori managed to keep his serve in the long first game, Federer got the better of him in the seventh game and rode the break to a one-set advantage.

In the fourth set, Nishikori lost serve in the ninth game with a double fault and a string of errant shots, leaving Federer serving for the match. The 37-year-old Swiss sealed the victory with a love hold in 2 hours, 36 minutes.

"Kei came out with smashing return winners and I had to definitely make some adjustments," Federer said, adding that Nishikori was "the better player" through the first set.

"(After) I got broken and I was fighting in that first set, I was able to protect my serve," he said. "It was a good serving performance today against a great return player."

In chalking up his 100th win at Wimbledon, Federer became the first player to reach the career century mark at any of the four Grand Slam tournaments.

World No. 7 Nishikori was aiming to become the first Japanese since Jiro Sato in 1933 to book a spot in the semifinals of the men's singles competition at the prestigious major.

The 29-year-old Nishikori entered the quarterfinals having lost to Federer seven times in 10 attempts, despite winning their previous face-off at the ATP Finals in November.

He also advanced to the quarters at this year's French Open and Australian Open but has not been able to reach the last four since the 2018 U.S. Open.