The highly-anticipated new film by Makoto Shinkai, director of the 2016 smash-hit animation "Kimi no Na wa" (your name.), is set to open in theaters across Japan on July 19.

"Tenki no Ko" (Weathering With You) follows the story of a high school boy who moves from his home on a remote island to Tokyo, where he meets a girl with a mysterious ability to stop the rain and clear the sky simply by praying.

"I want to make it an entertainment masterpiece that is undeniably interesting and one where nobody will lose out," the 46-year-old creator said at a press event last week.

Similar to Shinkai's previous works, the film promises to be a wholesome boy-meets-girl tale mixed with supernatural elements on a grand scale, and will once again feature songs by popular Japanese rock band Radwimps, who also provided the soundtrack for "your name."

Major Japanese film company Toho Co. is set to release "Weathering With You" on 448 screens in 359 theaters across the country. 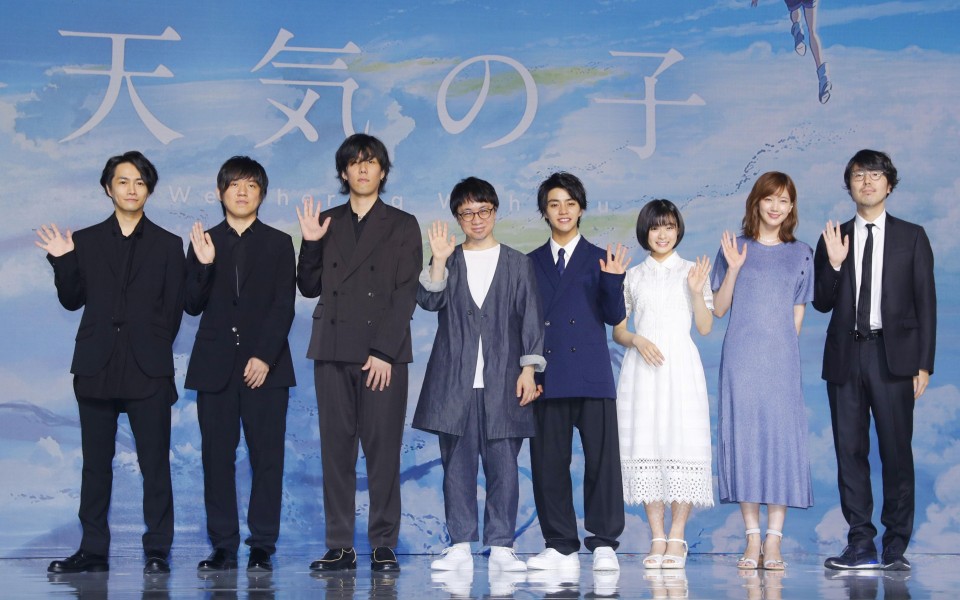 Theaters in Tokyo's Shinjuku and Osaka's Umeda will premiere the film from midnight July 18. Toho will also simultaneously screen the movie at 9 a.m. on the opening day at all 359 theaters.

Shinkai debuted with a short self-produced animation in 2002, but his first blockbuster success came when Toho signed up to produce "your name.," with the number of theaters showing the film jumping more than 10-fold as compared to his previous works.

The animated feature film about two teenagers in a body-swapping fantasy soon became a phenomenal hit around the world, thanks partly to word of mouth through social media, cinematographic appeal and settings modeled after real-life locations.

With fans across the globe, the director's latest film is already slated to be released in 140 countries and regions, exceeding the 135 for "your name."

"We have received 50,000 signatures in India requesting a release, so we're trying to make it happen," producer Genki Kawamura said.

"I think (this film) will just keep getting bigger and bigger, even in countries we couldn't reach last time," he said.

The blockbuster "your name.," released in August 2016, chalked up box-office revenues of over 25 billion yen ($231 million) in Japan, the second-highest take ever among Japanese movies, following Hayao Miyazaki's animation "Sen to Chihiro no Kamikakushi (Spirited Away)" which generated 30.8 billion yen.