Japan on Wednesday marked 100 days to go until the start of this year's Rugby World Cup, with World Rugby CEO Brett Gosper saying, "The waiting is almost over."

With 1.5 million of the 1.8 million tickets already sold and 500,000 overseas visitors now expected to attend, Gosper said the tournament, which kicks off on Sept. 20 and reaches its conclusion on Nov. 2, is set "to cause more exciting change here and around the world than any other Rugby World Cup."

"As the first tournament in Asia, Japan was always going to be special. Every edition of Rugby World Cup has its unique story, and this tournament will create exciting change for the sport, here and around the world."

"We awarded the hosting rights to Japan 10 years ago recognizing the clear and compelling opportunity to unlock the rugby potential of Asia...With 100 days to go, I am delighted that we are already converting that opportunity."

The ninth World Cup will see 20 teams play 48 games in 12 cities from Sapporo in the north to Kumamoto in the southwest, and is expected to add 216.6 billion yen to the Japanese economy. 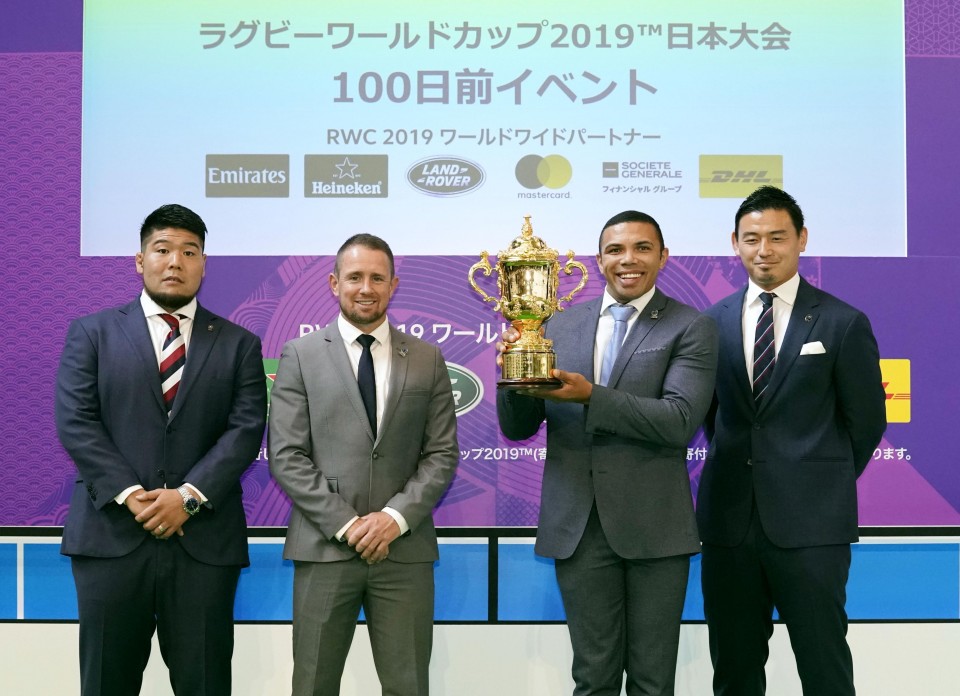 It will also have a far-reaching impact in Asia with 1.16 million new players already exposed to the game through the Impact Beyond Asia program and 1.5 million pounds (207 million yen) pledged to the ChildFund Pass It Back charity from rugby fans and commercial partners.

While there has been concern over the past few years regarding Japan's readiness to host one of the world's largest sporting events, local organizers are convinced everything is on track.

"The Webb Ellis Cup is here in Japan, our host cities are ready, our stadiums are in immaculate condition and our 20 teams are itching to take the field," said Japan Rugby World Cup 2019 Organizing Committee CEO Akira Shimazu.

"I speak on behalf of all Japan -- a 127 million strong welcoming committee -- when I say that we are ready to welcome the world to Japan, and ready to host a truly memorable and once in a lifetime Rugby World Cup."

It is a view that is also shared by World Rugby.

"This has been the most planned World Cup in history," Gosper said. "Everything does seem to be on track. We've seen huge ticket demand (5.5 million applications) and that was always our concern...and we've had some fantastic economic predictions."

"We always thought England (the 2015 hosts) would be the record breaker and this would be the groundbreaker because of its different situation in Asia, but it will break its own records in certain activity."

Among the events planned over the next 100 days is a tour around the country of the Webb Ellis Trophy, which arrived in Japan on Monday in the hands of 2007 World Cup winner Bryan Habana of South Africa and former Wales international Shane Williams.

The trophy tour will visit all 12 host cities as well as iconic places such as Kyoto and Hiroshima.

Mt. Fuji will also play host to the cup as Hiroyuki Tanuma, who played for Japan in the 1999 and 2003 tournaments, will lead a group of players from Nippon Sports University to the summit in August wearing the shirts of the 20 teams taking part in the tournament.

Habana and Williams were joined at Wednesday's event by Ayumu Goromaru and Kensuke Hatakeyama, who were part of Eddie Jones' squad at RWC 2015, when Japan became the first team to fail to reach the quarterfinals despite winning three pool games.

The two former Brave Blossoms both had high hopes for the host nation when action gets under way.

"Japan will win, I'm serious," said Goromaru, who was named one of the stars of the 2015 tournament. "Four years ago no one imagined Japan would beat South Africa. You have to have hopes and dreams."

Hatakeyama, who like Goromaru was part of the side that beat the Springboks in a game that set RWC 2015 alight, said while it was likely a Tier One side would win, he hoped a Tier Two team would walk away with the cup.

"That would convey a message that nothing is impossible and give great momentum to rugby worldwide."