Japan rejected Wednesday an offer by South Korea to settle a wartime labor dispute through diplomatic channels, saying the time for talks had already passed and it is now seeking to proceed with an arbitration process involving other countries.

South Korea said Wednesday it is willing to hold discussions with Japan on the condition that companies of the two countries chip in funds to compensate the victims.

Japan argues that the issue of compensation was settled by a 1965 bilateral accord under which it provided $500 million in financial aid to the South Korean government and a further $300 million in private credits.

Under Seoul's proposal, the implicated Japanese companies, including Nippon Steel Corp. and Mitsubishi Heavy Industries Ltd., as well as South Korean firms that benefited from the financial aid would contribute to a joint fund.

It is the first time that South Korea has made a specific settlement proposal since the court rulings.

But Japan quickly shot down the proposal, with Foreign Minister Taro Kono saying in a Twitter post, "This will not correct the situation of South Korea in violation of international law."

If South Korea continues to ignore the request to establish an arbitration panel and allow lawyers to seize and liquidate the Japanese companies' assets, Kono has said he would consider taking the dispute to the International Court of Justice.

The highly charged exchange came a day after a deadline for South Korea to name a member of the panel along with Japan and a third country came and went.

Taking the next step outlined in the 1965 accord, Japan has asked South Korea to form the arbitration panel with members chosen entirely by other countries.

Underscoring the frosty relations, Japanese officials say Prime Minister Shinzo Abe plans to forgo holding talks with South Korean President Moon Jae In on the sidelines of a Group of 20 summit next week in Osaka. 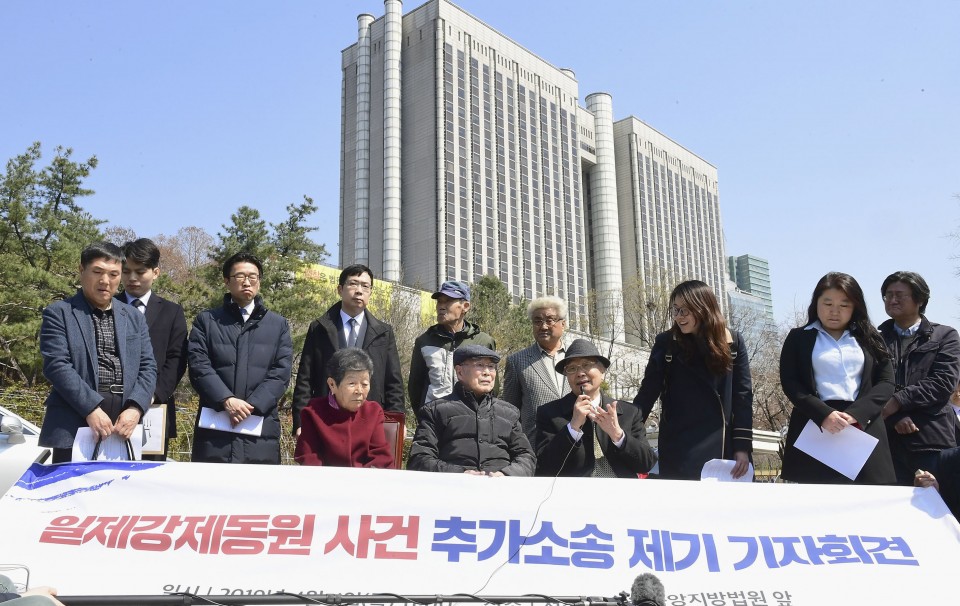 (Lawyers hold a press conference on April 4, 2019 in Seoul on wartime labor suits filed in South Korea against Japan firms.)

Kono and his South Korean counterpart Kang Kyung Wha are planning to meet on the fringes of the June 28-29 G-20 summit to discuss the issue, according to the officials.

In January, Japan asked to settle the issue through diplomatic channels. But South Korea did not oblige, maintaining that the issue should be left to its judicial system.

In a bid to break the impasse, Japan proposed on May 20 that the countries set up an arbitration panel consisting of one member each selected by the two countries and a third nation.

Under the 1965 accord, South Korea had 30 days to comply. South Korean officials had said they would "carefully review" the proposal but did not present a panel member by the deadline on midnight Tuesday.

On Wednesday, Japan pressed South Korea to move to the next step, in which each side has a further 30 days to ask another country to choose a panel member. Those two countries would also select a third country to produce the final panel member.

Kenji Kanasugi, head of the Japanese Foreign Ministry's Asian and Oceanian Affairs Bureau, made the request to a senior official at the South Korean Embassy in Tokyo, expressing regret over Seoul's failure to meet the deadline.

The South Korean official said he would relay the request to the country, according to the Japanese ministry.

Often marred by differing views of wartime history and a territorial row, bilateral ties have become especially fraught in recent months due to the wartime labor issue as well as an incident where a South Korean destroyer allegedly locked its fire-control radar onto a Japanese patrol plane in Japan's exclusive economic zone.