An award-winning photojournalist has shed light on forgotten Japanese women, who married Korean men and moved to North Korea in a 1959-1984 repatriation project.

"They have been in different settings since arriving in North Korea. Some of them have lost contact with their relatives in Japan, while some still wrestle with their conscience as they left their families in Japan behind," said Noriko Hayashi.

"Each of their lives is equally irreplaceable, and as most of them are getting old, we do not have that much time left to hear what they have to say," she added.

Recording their unheard voices and photographing their present-day lives, Hayashi will soon publish a book, "Japanese Wives Who Moved to Korea," on the occasion of the 60th anniversary of the launch of the repatriation project. 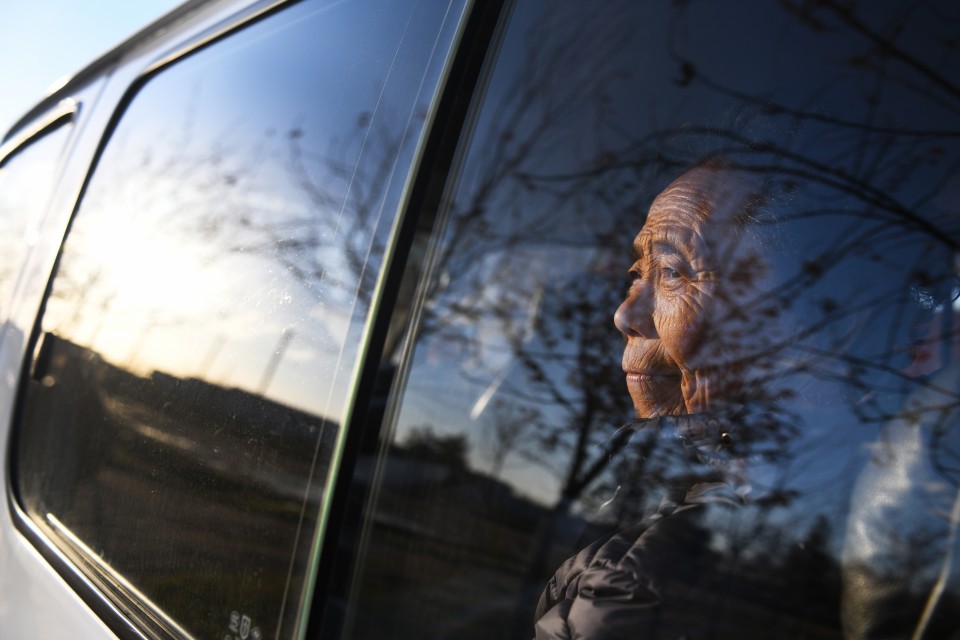 (Akiko Ota, a Japanese wife in North Korea, looks out a car window in Hamhung in November 2018) [Photo courtesy of Noriko Hayashi]

It brought 93,000 people -- Koreans and their families including 1,830 Japanese wives -- to the North, which was hailed a "paradise on earth," with secure employment and housing.

Hayashi, 35, visited North Korea 11 times from 2013 to 2018 and met with nine Japanese wives. While North Korean guides or interpreters attended each interview, Hayashi said she did not feel too constrained by them.

Mitsuko Minakawa, who lives in North Korea's southeastern port city of Wonsan, was among those interviewed.

Born in Tokyo in 1939, Minakawa was raised mainly in the northeastern city of Sapporo, her father's hometown, and met her Korean husband, Choe Hwa Jae, in 1958, when both were studying fisheries sciences at the prestigious Hokkaido University.

Choe and Minakawa, who were expecting their first child, left the Sea of Japan coastal city of Niigata for North Korea in 1960, despite strong opposition from her family, according to Hayashi's book.

Learning the Korean language and raising four children, Minakawa supported her husband, a researcher at a fisheries research institute, by taking advantage of her fisheries sciences knowledge.

"I believed I would have been able to return home probably in around three years and freely travel back and forth between the two countries," Minakawa said, recalling her early days in the North.

Another Japanese wife, Takiko Ide, born in 1927 in the southwestern prefecture of Miyazaki, became acquainted with a Korean man, who was her co-worker at a local bus operator when she was around 15 or 16 years old.

"I didn't know he was Korean before we started living together," she told Hayashi. "My mother didn't want me to marry a Korean, but I couldn't leave him" as they had already fallen deeply in love with each other, the book notes.

The couple and their children moved to North Korea in 1961 without telling Ide's Japanese family. "I wrote to my mother after arriving here, and I heard later she had collapsed upon reading it."

Ide raised four children, and her husband died in 1996.

On the experiences of Minakawa and Ide, Hayashi said, "They happened to love Korean men at a time when Koreans faced severe discrimination in Japan, and they have never changed their attitude even under such circumstances."

"They have remained fair, and I feel sympathy and respect for them," Hayashi said in a recent interview with Kyodo News.

It took Minakawa and Ide decades before being able to temporarily return home under a "homecoming program" for the Japanese wives, which allowed 43 of them in total to go back in 1997, 1998 and 2000.

On her homecoming, Minakawa told Hayashi, "I told my mother in front of her grave, 'Your daughter has returned, although belated,' and I apologized that I couldn't be present at her death." Her father had died before she left Sapporo. 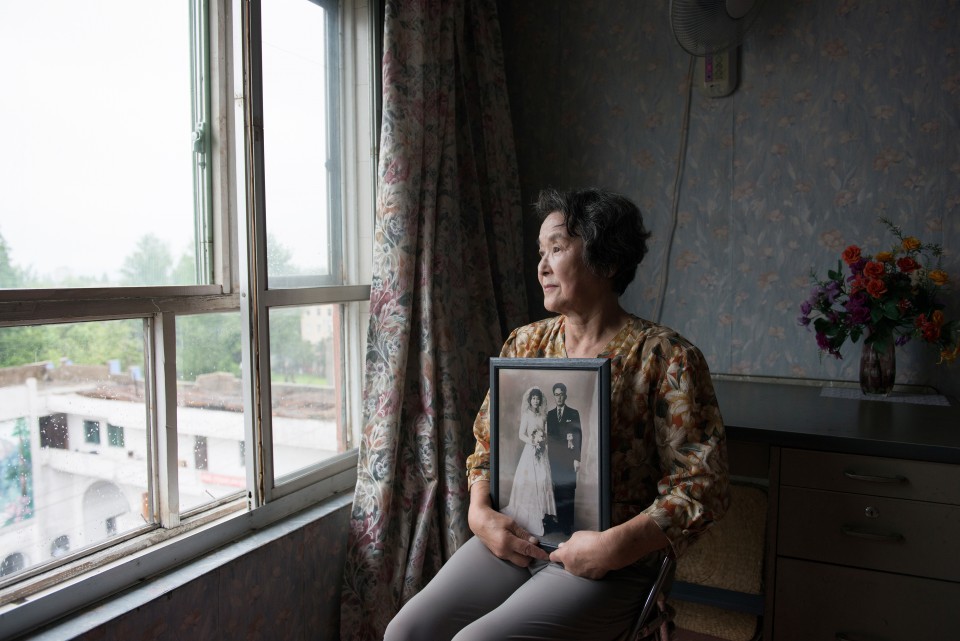 (Mitsuko Minakawa holds her wedding picture at her apartment in Wonsan, in August 2016) [Photo courtesy of Noriko Hayashi]

Ide's mother, meanwhile, died at the age of 99 in 1998, two years before her daughter's short return home.

Ide, who also lived in Wonsan, passed away at 89 in 2016, less than a month after her last interview with Hayashi, during which she caressed an old picture of her husband, saying, "He is handsome, isn't he?"

While Minakawa and Ide may be lucky in the sense they could at least set foot in their motherland once again, Akiko Ota in Hamhung, a Sea of Japan coastal city of North Korea, has given up her dream of a homecoming, rather than seeking to make it a reality.

After meeting her Korean husband in 1963 at around the age of 20 while working as a nurse, Ota, an Ishikawa Prefecture native, joined the repatriation project in 1967 to "provide education to our daughter."

"I didn't know anything about North Korea, including its language, and I didn't have much money...I just followed my husband," Ota, a mother of four, told Hayashi.

She applied for the homecoming program, but another has yet to come, since the third one in 2000, amid tough bilateral relations.

Asked by Hayashi if she thinks about Japan, Ota said, "Sometimes, but I have been obsessed with living...I have given up on returning home for a half-century." 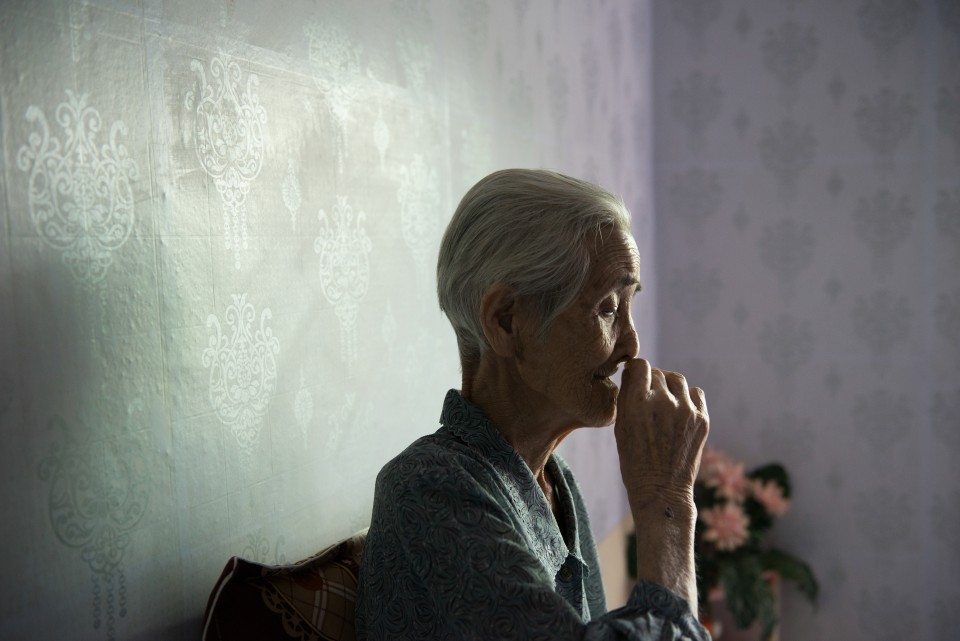 (Takiko Ide, a Japanese wife in North Korea, draws a breath at her apartment in Wonsan, in August 2016)[Photo courtesy of Noriko Hayashi]

While Japan and North Korea have faced a lot of unresolved problems, including Pyongyang's abduction of Japanese citizens, "I hope the authorities will satisfy the Japanese wives' longing for homecoming from a humanitarian perspective," Hayashi said.

"I have visited and will continue visiting Japanese wives so I can leave proof of their earnest lives," said Hayashi. "If nobody records them, they would be treated as if they have not existed."

Hayashi has also taken pictures of the Japanese wives' hometowns -- neighboring shrines, parks, rivers, and cherry trees -- to publish a photo collection next year that delves into their past lives, along with their current ones.

Hayashi, a freelancer, has photographed people struggling with hardships, including Pakistani women whose faces have been burned by sulfuric acid and the Yazidis ethnoreligious minority in Iraq, who were driven from their home by the Islamic State militant group.

She won the top award, among others, for feature reporting at an international photojournalism festival in France, the Visa d'or Feature Award, in 2013 for her coverage of "bride kidnappings" in Kyrgyzstan, in which men abduct young women for forced marriages.

Tokyo-based Iwanami Shoten Publishers will publish Hayashi's book, which will cost just over 1,000 yen with 32 photos, on June 20. 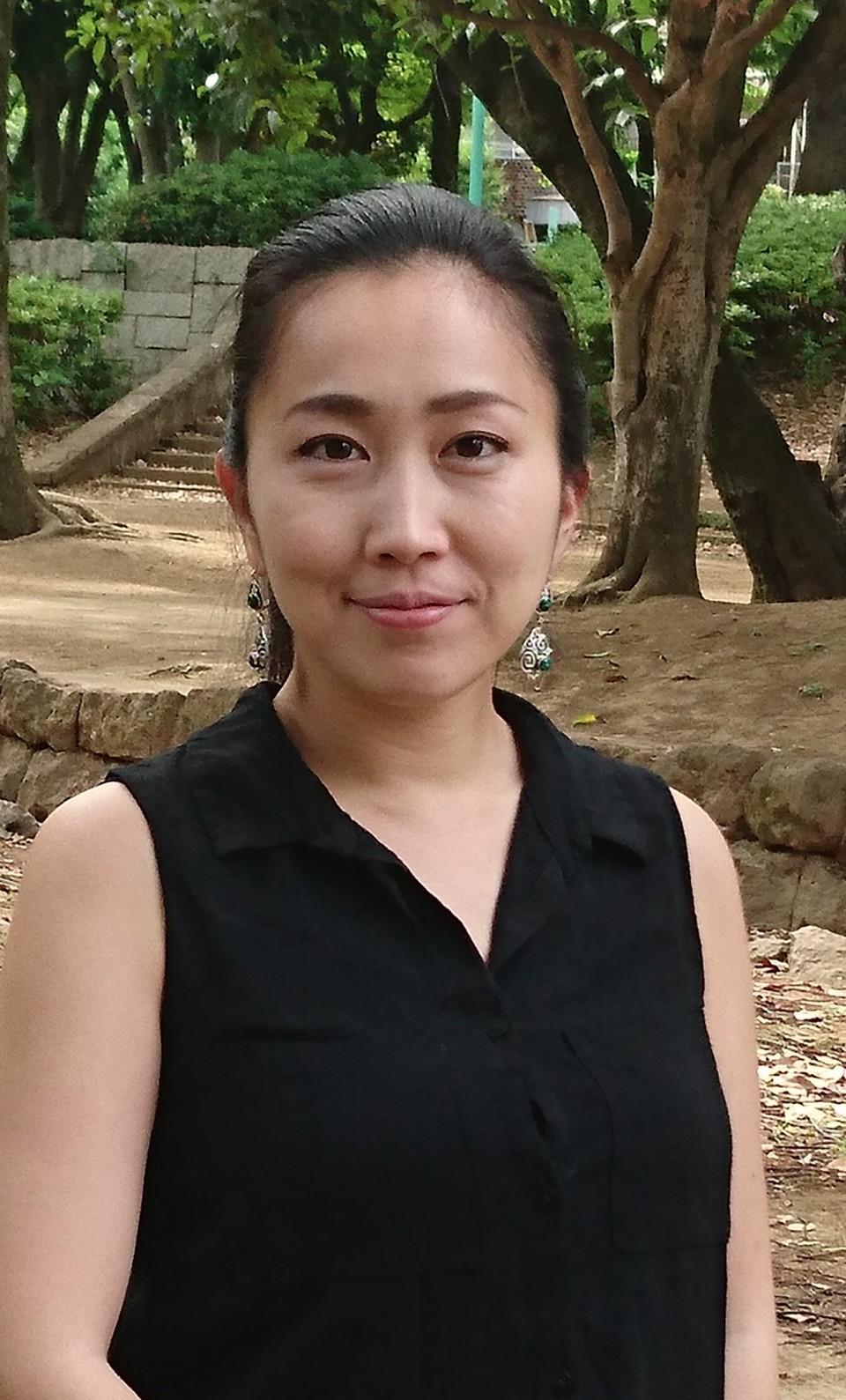