Prime Minister Shinzo Abe on Thursday called for other Asian leaders to jointly address the global challenges of reducing plastic trash in the oceans and promoting free trade.

In a speech delivered at a conference on the future of Asia, Abe said Japan will establish an international research center for plastic debris this year. The issue will be on the agenda at the Group of 20 summit in Osaka next month.

"I am determined for us to work together with you in ASEAN to protect the beautiful seas, our common asset," Abe said as leaders from the Association of Southeast Asian Nations gathered in Tokyo for the two-day conference.

Japan is planning to locate the research center within the Economic Research Institute for ASEAN and East Asia, based in Jakarta.

Abe laid out three major agenda items for the G-20 summit on June 28 and 29 -- maintaining the free and fair trading system, addressing the challenges of the digital economy such as data governance, and using innovation to tackle environmental issues.

In the speech, Abe pushed for reforming the World Trade Organization. 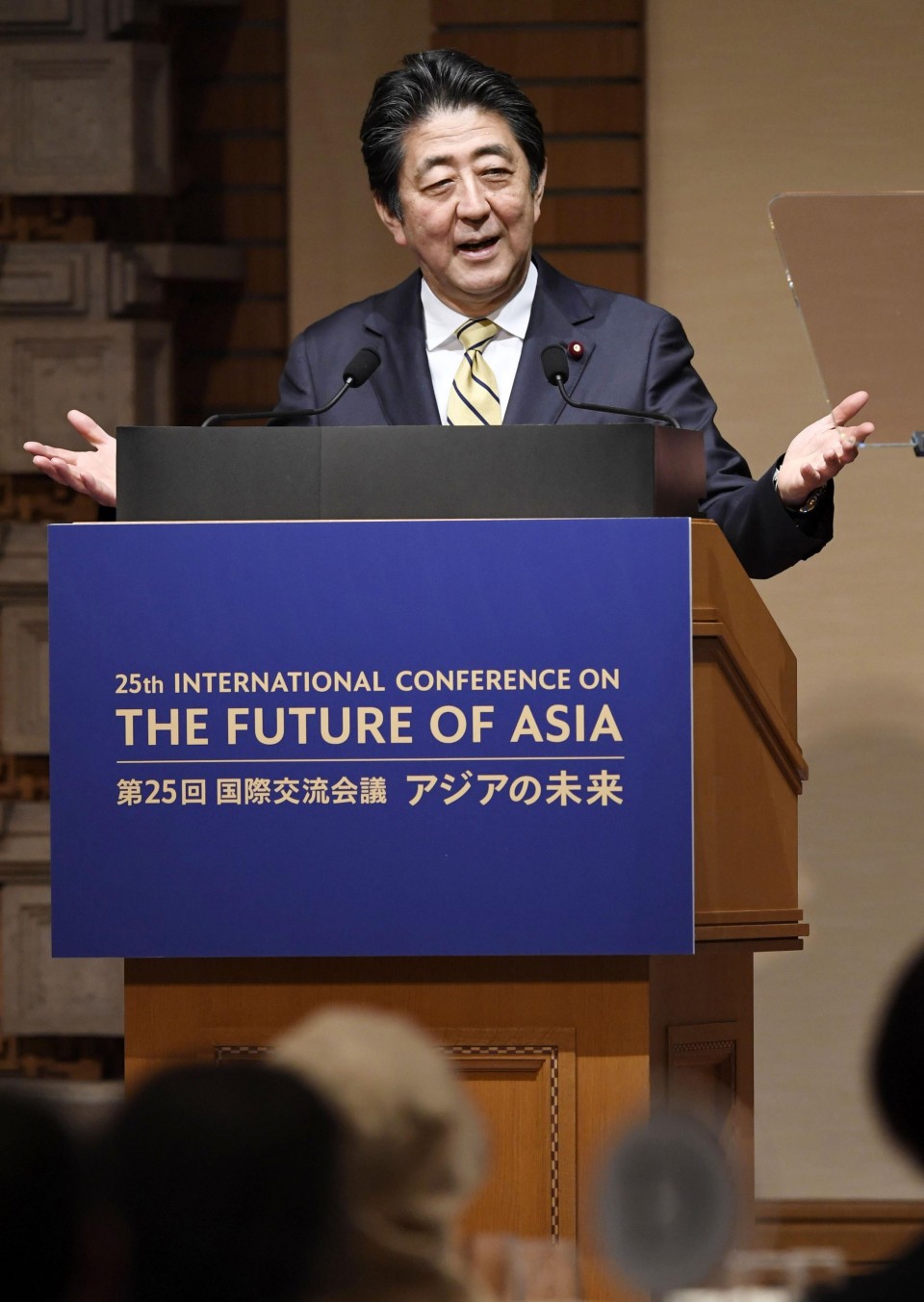 The WTO, set up a quarter century ago, "has failed to keep up" with changes in the world economy, Abe said, stressing the need "to make the WTO relevant again as a guardian" of free trade.

As negotiations are under way to create an Asia-wide free trade zone under the 16-member Regional Comprehensive Economic Partnership, Abe appealed for a successful conclusion to the talks.

The 16 nations -- the 10-member ASEAN along with Australia, China, India, Japan, South Korea and New Zealand -- are aiming to reach an agreement this year after missing a year-end deadline in 2018 due to disagreements over tariffs and other politically sensitive issues.

"We should together maintain the maritime order that has nurtured us up to the present day -- the free, open maritime order faithful to the rule of law -- and safeguard and then strengthen free trade to the greatest degree possible," Abe said.

Earlier in the day, Abe met with Singaporean Deputy Prime Minister and Finance Minister Heng Swee Keat, who assumed the post in May, and agreed to continue cooperation in promoting free trade, the Japanese Foreign Ministry said.

"Singapore is always looking forward to contributing to the G-20," Heng told Abe at the outset of the meeting, as Singapore has been invited to participate in the Osaka summit as an observer.

Japan has been strengthening ties with ASEAN nations at a time when China is also seeking closer relations with them.

As Tokyo is aiming to create a "free and open" Indo-Pacific, helping ASEAN countries, particularly those along the Mekong River, build infrastructure is one of the key diplomatic pillars.

When Abe met with Lao Prime Minister Thongloun Sisoulith on Thursday, Abe promised Japan's support for reconstruction in Attapeu, a southeast province of Laos, following the collapse of a dam last year.

Japan will also encourage administrative officials in Laos to study at Japanese graduate schools as part of bilateral cooperation, hoping to help raise future leaders of the country, the Foreign Ministry said.

As Vietnam has been also invited to join the G-20 summit as an observer, Abe and Minh expressed hope for a Japan-Vietnam summit on the sidelines of the G-20 meeting.