On a weekend in late March, Endeavour, a cafe in the Yunokawa hot spring area in Hakodate, was packed with customers, many of whom had come for its popular Otobe Beer.

"This is the best-tasting beer!" exclaimed one patron as he drained his beer dry.

At Endeavour, which opened in June last year, a variety of craft beers are served from taps mounted on the wall. "The water we use is the secret to our popularity," staff member Yasutaka Shimoda said as he pointed next door.

Hirotaka Shirai, president of health foods company Advance that runs the cafe, had come upon the spring water in Otobe by chance when he was searching for ingredients for a new product. He liked its mellowness and learned that the water had been loved by local people since ancient times.

So Shirai set up a subsidiary in Otobe and began producing bottled mineral water in 2016. He then started brewing beer there as well in spring last year. 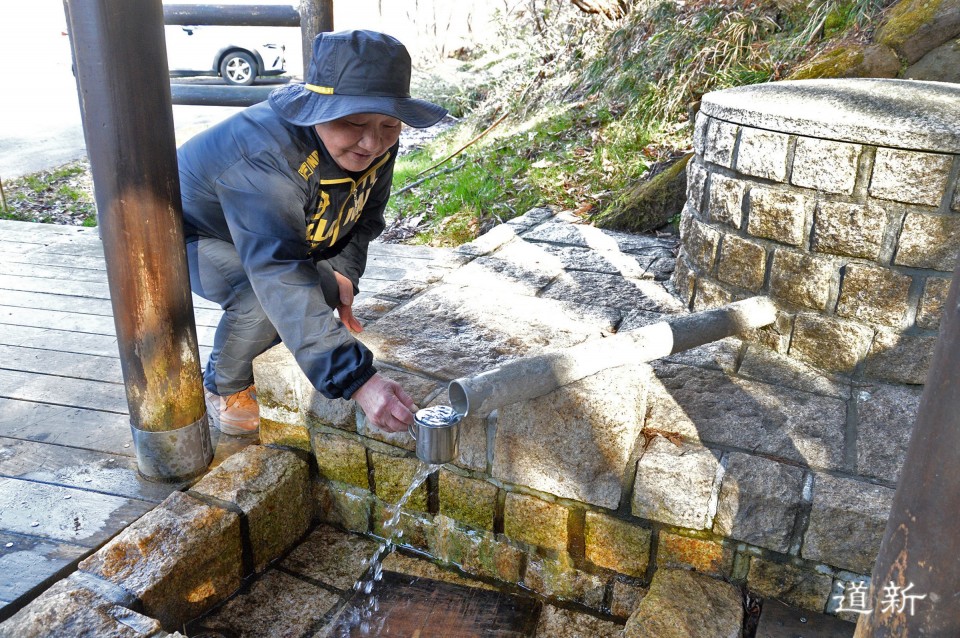 In the old days, underground spring water from Otobedake was naturally part of local residents' daily lives. Seiichi Kikuchi, a former local assemblyman, recalled that as a young boy, his duty was to fetch water from the springs every day after school.

"The springs were an essential part of daily life, and where people would take a rest and refresh," the septuagenarian said.

The residents' dependence on spring water gradually faded as piped water supply became available from the mid-1950s. But the springs came back under the spotlight four decades later, when the area was hit by a strong earthquake in 1993.

Water supply to about 40 households in the town was cut for days due to damaged pipes. But the locals were able to collect water from the springs for use as drinking water, an elderly resident recalled.

After the quake, the town government allocated 57 million yen to equip five of the 22 springs in the area with proper facilities to draw water, as part of disaster-prevention measures.

The five locations, all near the town's residential areas, were named "Inochi no Izumi" (fountains of life) upon the completion of the facilities in 1999. The high quality of the spring water has since attracted people from near and far.

Among fans of Otobe's spring water is restaurant chef Takahiro Kikuchi, who runs Kappo Kikukawa in Hakodate's Goryokakucho. He has been using spring water from Otobe to cook rice and make "dashi" broth at the restaurant since it opened in 2015.

"Water from Otobe gives the rice a nice shine (when cooked)," he said. "It also helps bring out the umami in kelp broth and makes it taste more full-bodied." 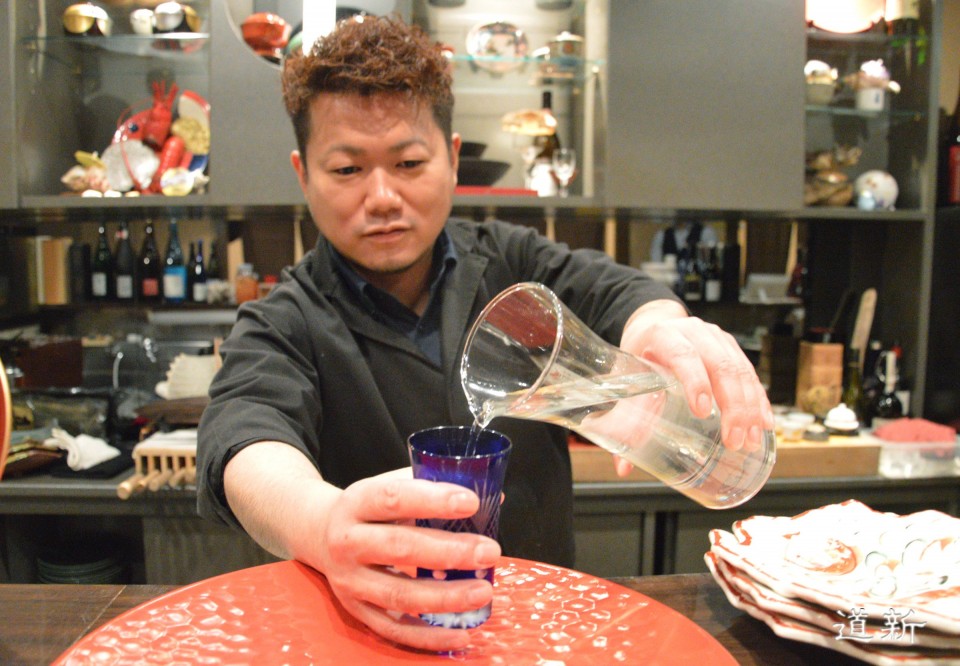 Kikuchi first encountered Otobe's spring water about eight years ago during a visit to his wife's family home in the town, where he found a row of large plastic bottles all filled with spring water.

He tried it and it tasted good even at room temperature. Kikuchi said he immediately knew he wanted to use this water in his cooking.

Since then, Kikuchi drives 70 kilometers to Otobe from Hakodate once every two months to bring back 200 liters of spring water.

"Water is the key to cooking. This water is irreplaceable," he said.

Similarly, Akemi Kadono, the owner of Kitchen Cafe Nodoka in Otobe, has been using the spring water to brew coffee for about nine years at the recommendation of a customer.

"The water is soft and smooth, and it amplifies the aroma of the coffee beans," said Kadono.

The water source of Inochi no Izumi comes from rain and snow that has fallen on Otobedake and its surrounding mountains, and passed through the strata of volcanic ash before gushing above ground at Otobe. Small amounts of minerals are dissolved into the water along the way, and the strata helps filter impurities from the water.

The Inochi no Izumi springs are said to have the perfect water hardness -- ranging from around 59.3 milligram per liter to 30.8 mg/L, according to data released by the town government. Water hardness refers to the amount of calcium and magnesium, with measurements below 100 mg/L considered soft water and 100 mg/L or above being hard water.

"This is arguably the best quality water in Japan," said Norihito Tanbo, a former president of Hokkaido University whose expertise is in aquatic environmental engineering.

Hard water often carries a bitter taste, while water that is too soft can become tasteless. Water at the Inochi no Izumi springs "is as good as the famous spring water at the foot of Mt. Fuji," Tanbo said.

On weekends, a long queue forms at Komonai no Mizu, one of the five Inochi no Izumi springs, where the water hardness is measured at 30.8 mg/L.

Among those in line was a local resident who comes to the spring about twice a month for the water. "This is water that you'd want to fetch even if you have to wait," the man in his 50s said, not minding the half-hour wait at all.

Another fan of Otobe's spring water who comes every week with his wife from the town of Yakumo smiled wryly and said, "We don't really want any more people to know about this place."

As more and more people visit the Inochi no Izumi springs from outside of town, the local government is reminding visitors, as a precaution, to boil the water before drinking.

For those who want a taste of Otobe water but cannot make it to the springs in person, Meisui-Otobe Bottlers, a subsidiary of Otobe Beer maker Advance, offers it in 500-millimeter bottles priced at 194 yen.

Available in shops around Hakodate as well as at the Hokkaido Dosanko Plaza Sapporo branch, the Gaivota bottled mineral water racked up annual sales of about 10 million yen last year, five times its initial sales in 2016.

Gaivota is selling well even though it is more expensive than the average bottled mineral water. In March, it became the first mineral water brand to be accredited by the Hokkaido High Grade Foods Selection.

At a fair hosted by the Hokkaido Government Hiyama Subprefectural bureau to promote local specialties in late February in Hakodate, a tasting corner for coffee brewed with Gaivota water attracted many female visitors.

Sipping her sample coffee, a female visitor in her 50s said, "Women who are interested in beauty and health pay attention to drinking water as well. I want to buy water of high quality, even if it is expensive."

Gaivota's business goes beyond Japan, as the company started exporting to Taiwan this spring after receiving orders from a tea maker in Taichung.

The president of the Taiwanese tea maker visited Meisui-Otobe Bottlers' plant in Otobe in December after hearing about the popularity of Gaivota water.

The two sides struck a deal for water to be supplied to the tea maker's new water dispenser business and the first shipment of 25,000 liters was delivered in March. A total of 150,000 liters of Gaivota water is expected to be shipped this fiscal year ending March 2020.

Furthermore, a U.S. hotel operator that runs luxury hotels in Hokkaido's Niseko and around the world has expressed interest in serving the bottled water in its guest rooms.

"I hadn't imagined that water from Otobe would develop into such a big business," said Advance president Shirai. 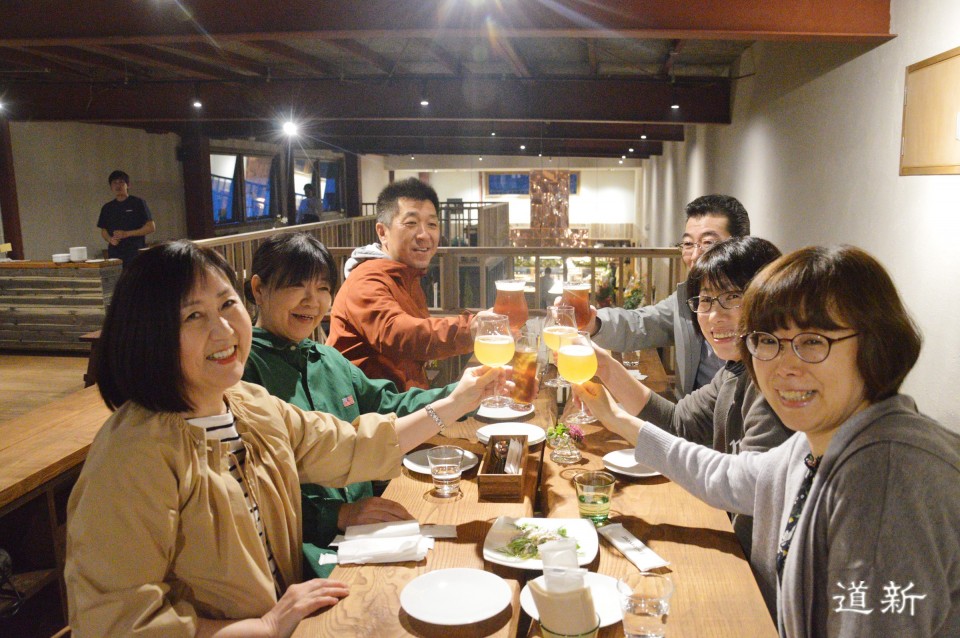 In late April, Advance opened restaurant Guild Endeavour in Otobe. Like the Endeavour cafe in Hakodate, the new eatery also has an adjoining brewery that makes beer with Otobe spring water.

Guild Endeavour has now become a popular spot among beer lovers from across southern Hokkaido.

"Spring water, which has been such a familiar part of our daily lives, is now popular in a different form," said a local resident.

Newly elected Otobe Mayor Tsutomu Terashima, who had worked at a major beverage maker in Tokyo, said he sees business potential in Otobe's spring water and plans to continue the town's efforts to promote it.