A 56-year-old man who was arrested over knives left on the classroom desk of Prince Hisahito at a Tokyo school has made critical remarks about the Japanese imperial system during interrogations, investigative sources said Thursday.

Kaoru Hasegawa has admitted leaving the knives after he was apprehended Monday for allegedly trespassing on the grounds of the Ochanomizu University Junior High School attended by the 12-year-old heir to the Chrysanthemum Throne, according to the sources.

Two knives were found on the desk last Friday, with security cameras capturing a helmeted man entering the school earlier in the day. Prince Hisahito and his fellow students were outside the classroom at the time.

Hasegawa told investigators he checked the location of the prince's school by searching online, the sources said.

The incident occurred as Japan was preparing to celebrate the ascension of Emperor Naruhito on Wednesday. The imperial succession promoted Prince Hisahito to second in line to the throne after his father, Crown Prince Fumihito, the younger brother of the emperor.

Investigations have revealed Hasegawa had been staying at a hotel in Tokyo for several days before the incident, and bought the knives and other items during that time.

Around noon Friday, a teacher found a 60-centimeter-long aluminum bar with two fruit knives attached by duct tape to one end -- giving it the appearance of a pitchfork -- placed across the prince's desk and the one next to it. The blades were painted pink, according to police. 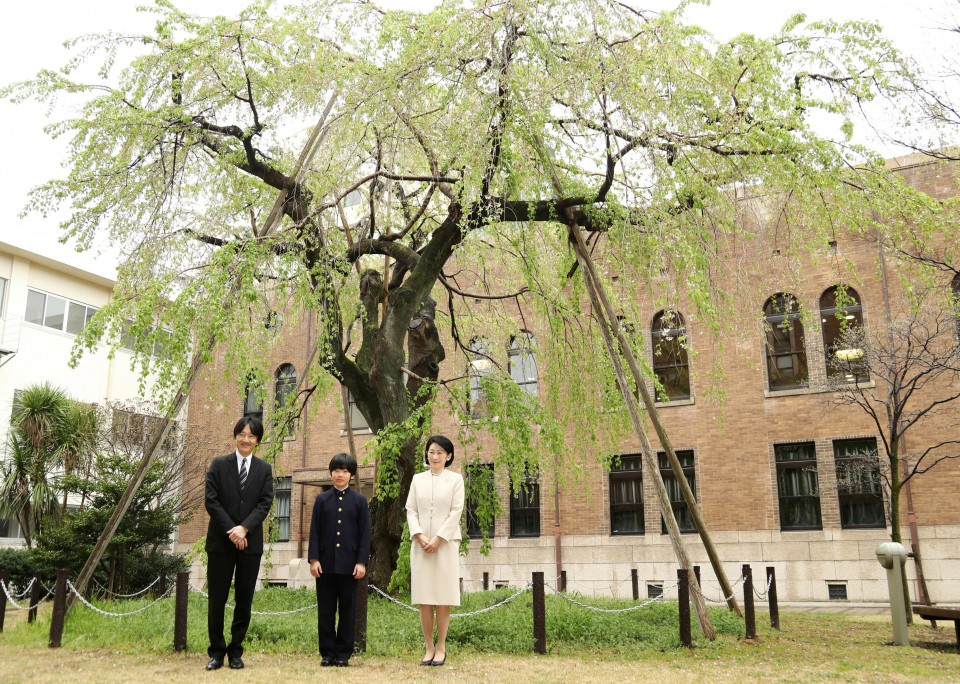 (Prince Hisahito, center, is pictured with his parents, Prince Fumihito and Princess Kiko, on April 8, 2019)

Man arrested for trespassing at prince's school where knives were found