Japanese legislators on Friday called for more efforts to eradicate discrimination against residents who were born abroad and their descendants three years after parliament enacted a law to counter hate speech.

Four House of Councillors members of ruling and opposition parties who helped pass the legislation met the press to talk about the law, which was enacted on May 24, 2016 and took effect on June 3 that year.

"An increasing number of local governments have established ordinances and guidelines" in line with the law, but some candidates have made hate speeches during their election campaigns, said Shoji Nishida of the ruling Liberal Democratic Party.

"The public needs to understand this kind of behavior is not socially acceptable," he said.

Katsuo Yakura, a member of the LDP's coalition partner Komeito, said the law has had some effect in court rulings, with injunctions issued to ban hate speech. "We need to make constant efforts," he added. 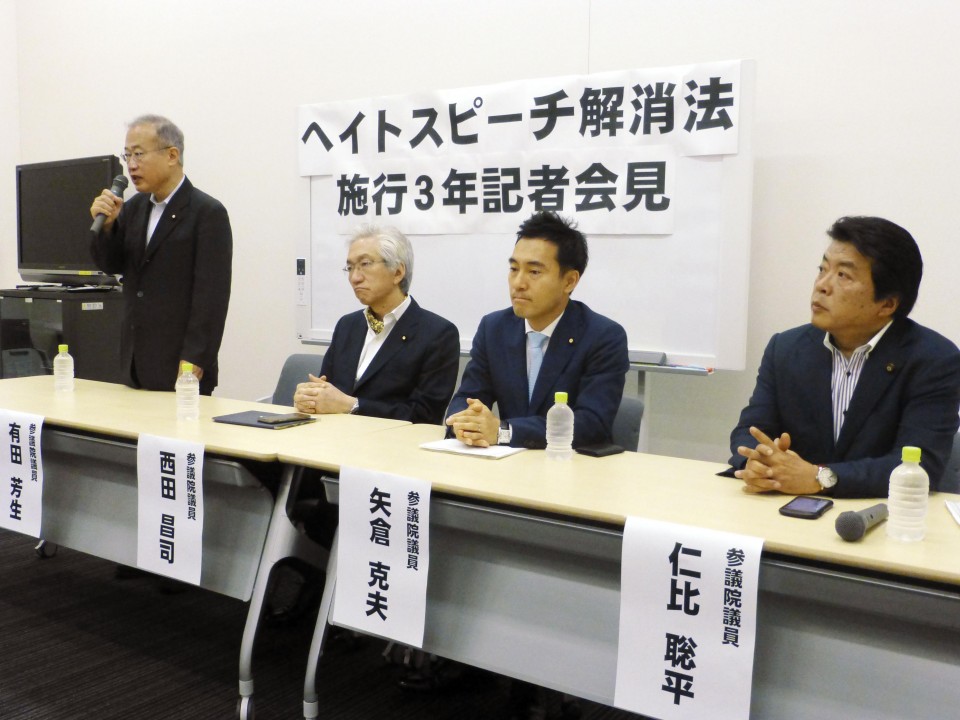 While Nishida and Yakura said further efforts to eradicate hate speech should be made under the existing law, opposition party members called for the enactment of new legislation.

"There is a limit with the current law to tackle human rights violations on the internet," said Yoshifu Arita, member of the main opposition Constitutional Democratic Party of Japan.

Sohei Nihi of the Japanese Communist Party said it is necessary to enact a new law with a provision banning hate speech in order to eradicate it.

The four lawmakers all belonged to the upper house committee on judicial affairs that deliberated the legislation in 2016.

Hate speech targeting ethnic minorities in Japan often includes threats to kill people of certain nationalities and extreme insults such as comparing certain groups of people to cockroaches or other creatures, or remarks like "go back to your home country."