Seven-Eleven Japan Co. and Lawson Inc. said Friday they will start discounting rice balls and lunch boxes that are close to their expiry dates in order to reduce food waste, a growing issue in the country where 6 million tons of still edible foods are discarded annually.

The Japanese convenience store operators will offer customers enrolled in the chains' point programs shopping credits worth 5 percent of the value of purchases as incentive for buying such products. They have been selling products at list prices and had all but banned franchise store owners from offering discounts.

The Japan Fair Trade Commission ordered Seven-Eleven Japan in 2009 not to hinder franchise store operators from selling items nearing their expiration at a discount, but operators say they could not get the headquarters' approval to cut prices most of the time.

The cost of giving shopping points to customers will be shouldered by the companies. 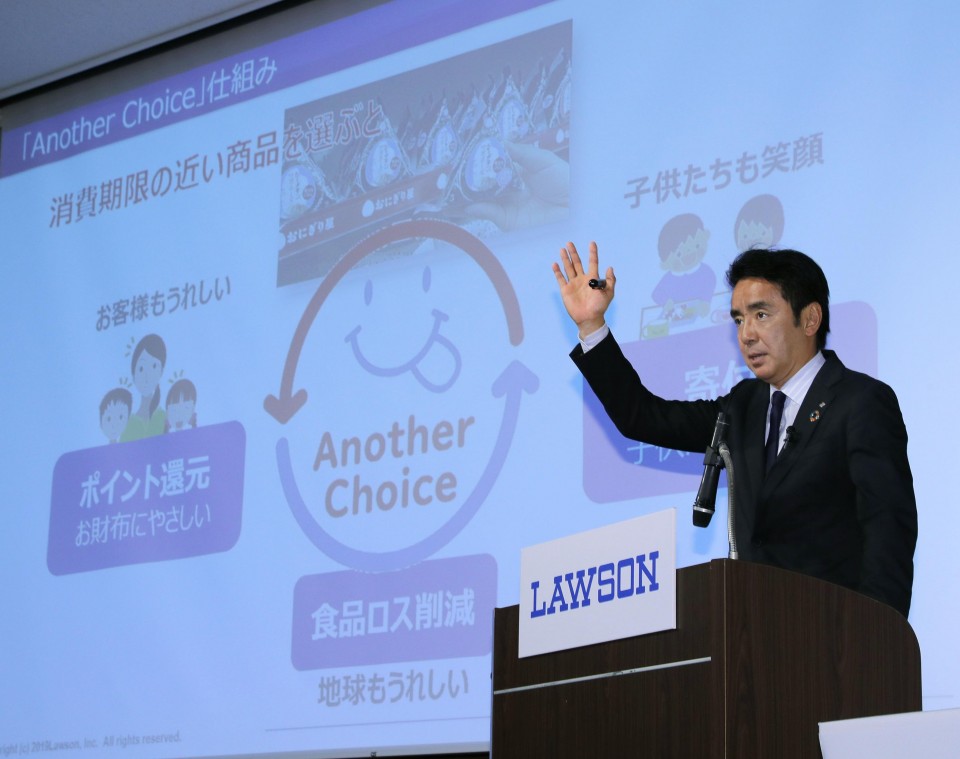 (Lawson President Sadanobu Takemasu at a press conference on May 17, 2019.)

"In the end, it's better to sell out all the products," Lawson President Sadanobu Takemasu told reporters.

Industry leader Seven-Eleven will start giving points to purchasers of any of the around 500 items targeted, mainly lunch boxes, rice balls, noodles and bread, which are set to expire in four to five hours. The initiative will be launched from this fall at around 20,000 stores nationwide.

In a similar move, Lawson said it will start a trial at its stores in Ehime and Okinawa prefectures to offer rewards of 5 percent of the price in points to customers who buy from 4 p.m. or later rice balls and lunch boxes nearing expiration.

In the trial running from June 11 to Aug. 31, Lawson will also separately donate 5 percent of the proceeds of sales of items close to expiry to entities supporting childrearing. The company will consider expanding the discount system to stores nationwide based on the outcome of the experiment.

"We will try to cut food loss by 50 percent by 2030 from the current levels," Takemasu told a press conference. "It will be beneficial to customers, the environment and our store owners who had to carry the costs to discard unsold items."

According to the U.N. Food and Agriculture Organization, around 1.3 billion tons of food is wasted globally every year. The Japanese government's data in fiscal 2016 showed 6.43 million tons were wasted in the country, with over a half of it by the commercial sector.

The Ministry of Agriculture, Forestry and Fisheries in January urged industry groups of convenience stores and supermarkets not to overproduce seasonal sushi rolls, the first such request by the ministry, after images showing a massive amount of the discarded product were picked up on social media sparking controversy.

"It is extremely important from a social standpoint to decrease food loss," industry minister Hiroshige Seko told a press conference Friday in reference to the Seven-Eleven's move.