Japanese and Russian leaders will meet June 29 on the fringes of the upcoming Group of 20 summit in Japan, Russian Foreign Minister Sergey Lavrov said Friday following talks with his Japanese counterpart Taro Kono over issues linked to their decades-long territorial dispute.

During the talks, the two agreed to work toward materializing a plan to conduct joint economic activities on the group of disputed islands off Hokkaido, which Japan hopes will help lay the groundwork to resolve the territorial row.

"We confirmed that we'll go forward in a flexible and constructive manner," Kono said at a joint press briefing with Lavrov in Tokyo. "On the points where our countries disagree, I explained Japan's position."

Lavrov, meanwhile, said "not insignificant differences" remain in the two countries' views on how to go forward with signing a post-World War II peace treaty.

A treaty has not been concluded due to the dispute over the sovereignty of four Russian-held islands, called the Northern Territories in Japan and Southern Kurils in Russia. The Soviet Union seized the islands after Japan's surrender in 1945, a move Tokyo claims was illegal.

To conclude a treaty, Japan must accept the outcome of the war, Lavrov told reporters after the press briefing.

He also told reporters that the countries should first sign a peace treaty and then discuss where to draw the border, arguing against Tokyo's stance to first "resolve the issue of the attribution of the islands to Japan and then sign the treaty."

"It is the order that is written in the (1956) joint declaration. It is the only order," the Russian foreign minister said, referring to a document that is serving as the basis for the peace treaty negotiations. 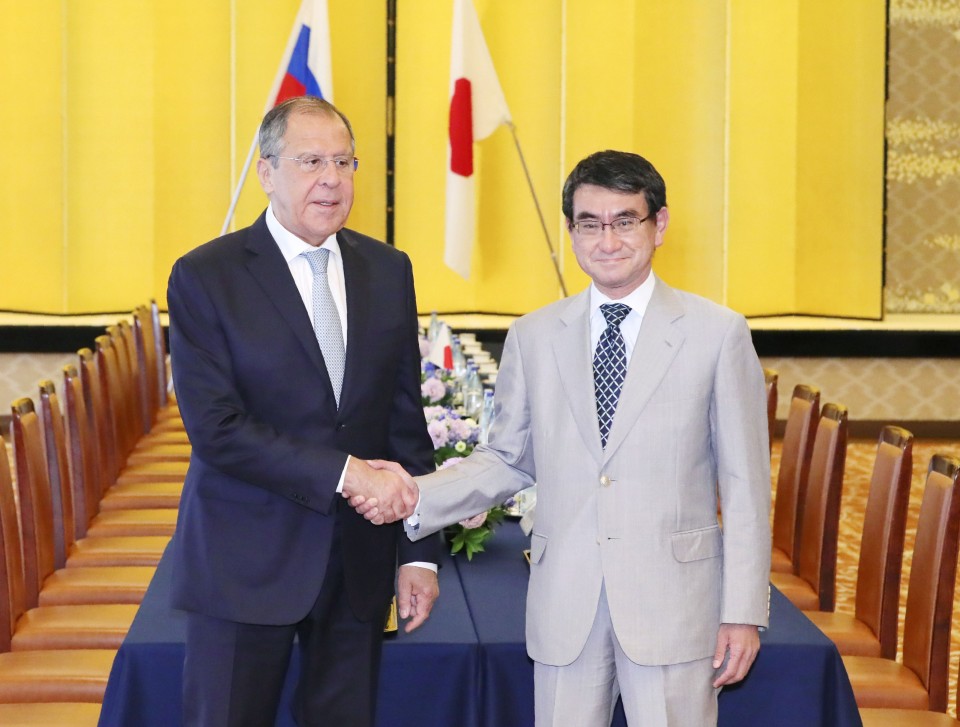 The meeting between Kono and Lavrov was their fourth since being appointed the lead negotiators in efforts to conclude a peace treaty based on the 1956 document which mentions the transfer from Russia to Japan of the smaller two of the four islands.

Japanese Prime Minister Shinzo Abe had previously aimed to secure the return of the island of Shikotan and the Habomai islet group at the summit with Russian President Vladimir Putin but gave up seeking such a deal when Moscow took a more hard-line stance.

Abe is now seeking to put the negotiations for a peace treaty on hold and instead begin a number of joint economic activities on the islands as a trust-building exercise.

Lavrov said talks on the economic activities are moving at a "good tempo" and that he is confident they will be able to report substantial results to the leaders ahead of the summit, which will take place on the sidelines of the gathering of the G-20 leaders to be held on June 28 and 29 in Osaka.

Tourism and waste reduction are expected to be realized the soonest, as they have the fewest legal hurdles to be cleared.

The visa-free travel could eventually extend to all of Russia and Japan, he said.

Lavrov and Kono held the meeting a day after so-called two-plus-two security talks including the defense ministers of their countries.