An imperial turtle-shell divination rite was held Monday to prepare for the most important ceremony to be performed by new Emperor Naruhito upon his enthronement.

In the "Saiden Tentei no gi" ritual at the Imperial Palace, diviners observed the cracks that appear on heated turtle shells and selected two prefectures -- Tochigi from eastern Japan and Kyoto from western Japan -- that will supply crops for the upcoming "Daijosai" thanksgiving ceremony in mid-November.

The Daijosai is performed by a new emperor only once during his reign. The emperor will offer newly harvested rice to his imperial ancestors and the deities of heaven and earth, while also partaking of the rice himself, and pray for peace and abundant harvests for the country and its people. 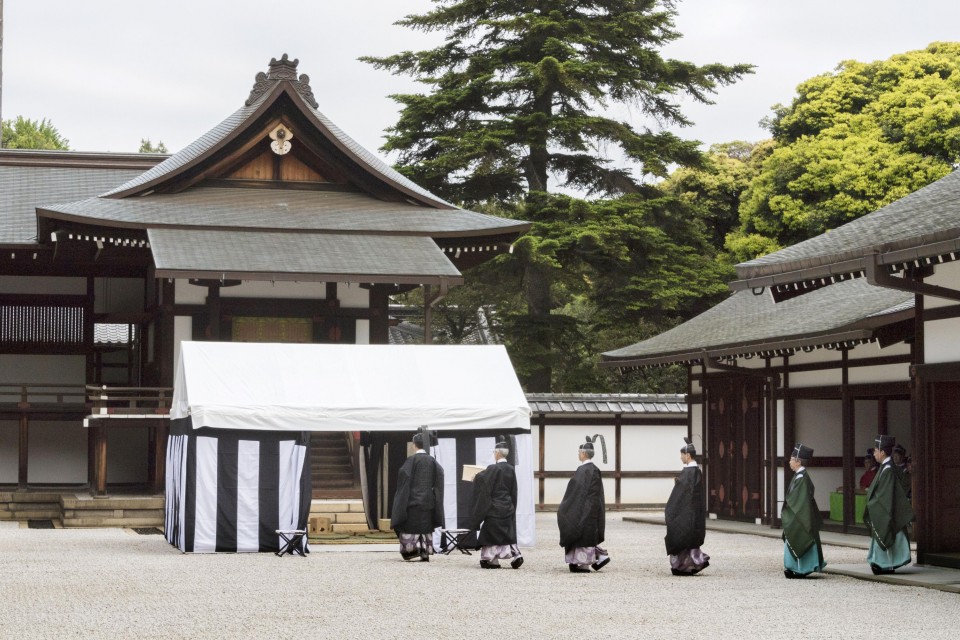 (Turtle-shell divination rite held on May 13, 2019.)
[Photo courtesy of the Imperial Household Agency]

In the morning, the robe-wearing diviners entered a tented structure set up in front of the sanctuary dedicated to the deities to begin the fortune-telling process, conducted for the first time in 29 years.

The Imperial Household Agency said the carapaces of three green turtles from the Ogasawara island chain in the Pacific, about 1,000 kilometers south of Tokyo, had been prepared to create eight pieces for the divination rite.

While international trade in green turtle is banned under the Washington Convention, shells of animals captured from the Ogasawara island chain with special permission were used in the ceremony, according to the agency.

The shells were shaped to measure 24 centimeters in length and 15 cm in width, with a thickness of 1 millimeter. Japanese bird cherry was used as firewood.

Other details of the ceremony, including how the cracks are assessed, are kept a secret.

The imperial household is said to have used turtle-shell divination, originally from China, more often in the past, such as in the Heian period (794-1185), to decide the date of imperial rites. 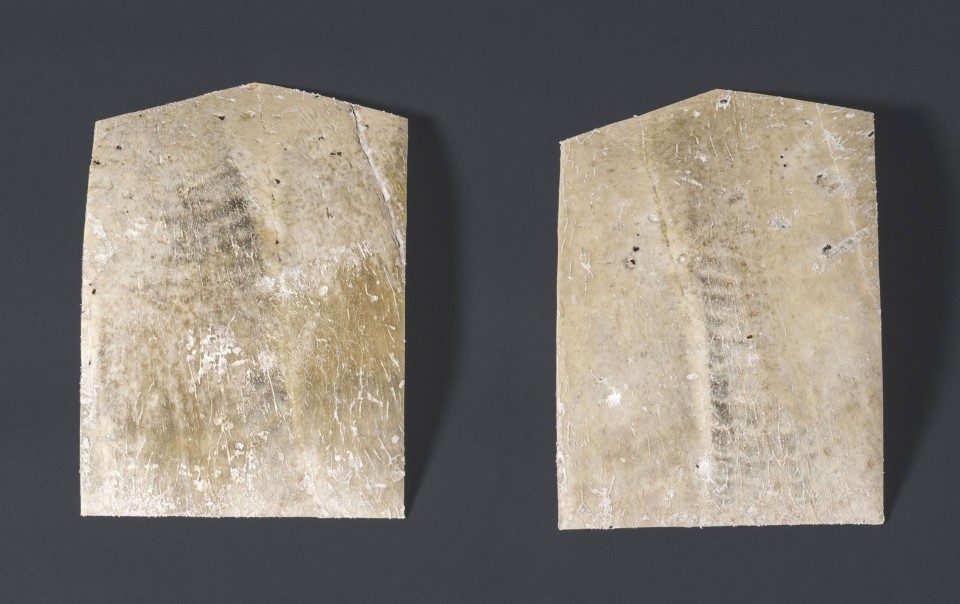 Currently, it is only used to designate the two prefectures that will provide rice for the Daijosai ceremony, according to the agency.

Tochigi Prefecture, north of Tokyo, welcomed the announcement that it would have the honor of growing the rice, with an official in charge of agriculture saying, "We are surprised but honored."

With artisans who worked on preparing the turtle shells in the wake of the previous era change having either passed away or retired, the role went to Tokyo-based tortoiseshell craftsman Takao Morita.

"I had to learn through trial and error as it was my first time (making them)," the 68-year-old said.

Morita received a request from the agency around March last year, after then Emperor Akihito indicated his desire to step down in a rare televised video message citing concern he might not be able to fulfill his official duties due to his advanced age.

Emperor Akihito, 85, became the first Japanese monarch to abdicate in 202 years, giving way for his elder son Emperor Naruhito to succeed the Chrysanthemum Throne on May 1 this year. 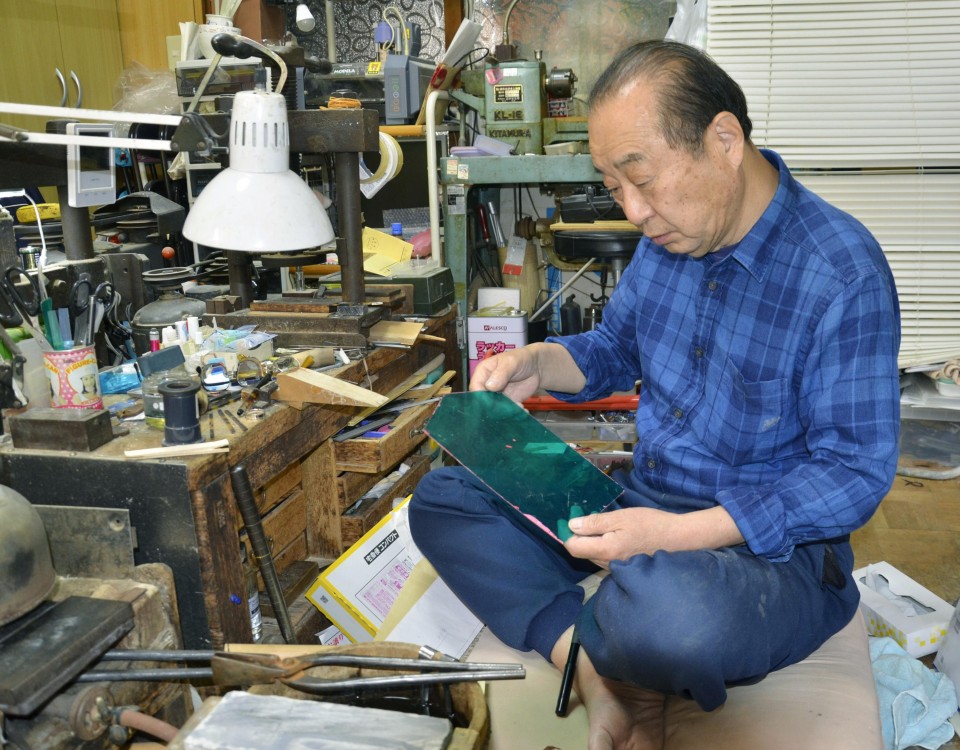 Morita said he usually handles the shells of hawksbill sea turtles, which are about 40 centimeters in size, to manufacture eyeglass frames and decorative items. But the carapaces delivered to him from the agency were 1-meter-long.

It was also his first experience of processing the bones underneath the shells, rather than the surface of shells to which he is accustomed.

"It differed from my usual work, but I thought I could do it," Morita said.

With the agency not giving any specific instructions, he looked through old documents to research the shells. He crafted the bones into elongated pentagons and carefully shaved the pieces with a machine, creating a number of prototypes.

With Morita having to work on the special order at the same time as his usual business, he only fully began processing the shells from this year. He managed to deliver the final pieces to the agency in April amid a growing celebratory mood for the era change, but said he did not feel nervous undertaking the task.

"I worked carefully with each individual piece," the craftsman said. "Although it was the same day-to-day operation, I felt a weight left my shoulders after they were delivered."

The previous "Saiden Tentei no gi" was held in 1990 following the enthronement of then Emperor Akihito the year before, and Akita and Oita prefectures were given the rice-growing role through it.

Imperial rites are usually carried out using the imperial family's money. But the expenses linked to the turtle shells, as well as payments for the rice to be harvested, are covered by taxpayers as court expenses because they are part of a series of imperial succession events.

Some, however, have questioned the significance of the fortune-telling tradition.

"No one in this modern day believes that it can really determine (the prefectures)," the late Shinobu Kobayashi, who served as a chamberlain for Emperor Hirohito, posthumously known as Emperor Showa, wrote in his diary.

A total of about 2.7 billion yen ($24.6 million) is expected to be spent from state coffers for activities related to this year's Daijosai, according to the government.